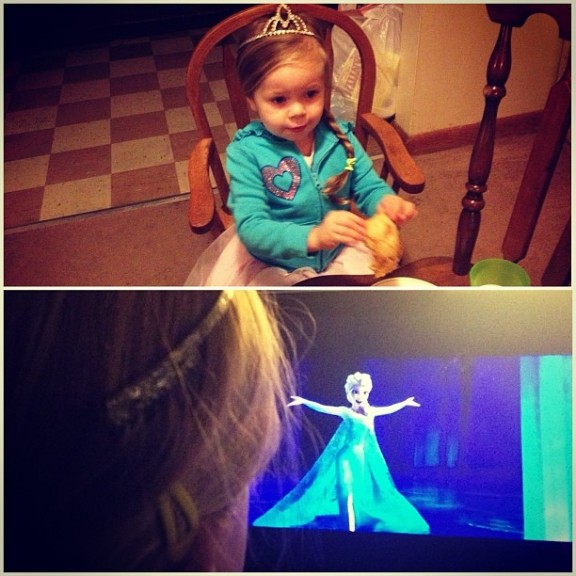 My three-year-old daughter Lucy loves to sing. In point of fact, if she’s not talking or sleeping, the child is singing. As I’m typing this at 9 p.m. and she has been in bed for half an hour, I can hear her from her bedroom just a-singin’ away.

She comes by it honestly: I’m from a fairly musical family, and my husband and I both strut around the house in hours of boredom making up songs about whatever we’re doing, what the other person is doing, what’s on the TV, what’s lying on the table that we just passed, etc. Granted, one of us is just ever so slightly more tone deaf than the other, but it’s something that I have learned to the other, anonymous party has learned to love.

So she loves singing. And this is not really a problem, right? Little kids singing is basically half of YouTube, with the other half comprised of cats and news anchor bloopers.

What this guy needs is a swift kick.

It’s not even the fact that she sings at the top of her lungs, no matter where she is, and no matter what you as a human parent are trying to accomplish in the world. No, the problem is not the singing itself, but that she has, for the last several weeks, sung the same song over and over, almost without a break. In fact, the only time she’s not singing the song is when I try to get a recording of her doing it to post on this blog and prove it, not unlike that infuriating frog from the Warner Brothers cartoon. Wikipedia tells me this particular amphibian is called “Michigan J. Frog,” a name as insufferable as its owner.

The song that my daughter and, consequently, everyone else in the house can’t get out of their heads is this one, a number from Disney’s latest animated effort, Frozen, entitled “Let It Go”:

Not bad, right? At least, not when sung by the incomparable Idina Menzel who, by the way, appears to know all the words, and not just the first two lines of the initial chorus. But despite being fuzzy on the lyrics, this is Lucy’s signature number, not only because of the constant repetition, but because of the showmanship that goes into a full performance. It goes like this: on some evenings, she will request that she be allowed to watch the video above, but only after donning clothing to mimic that of “Queen Elsa,” the star of the above scene. So we’ve got to get a dress. But Elsa’s get up is blue and none of Lucy’s dress-up dresses are the right shade, so we must add a blue jacket to the ensemble to satisfy her profound eye for detail. Then there are the shoes, black patent leather, naturally, and finally, the piece de resistance: a child-sized tiara, which I’ve had since 1990 or so, back when I myself was a cute kid and they gave out tiaras for that kind of thing at county fairs. The crown passes from mother to daughter, and the look is complete, and now we can watch the video. It is at this point that my child breaks out into a self-choreographed routine of fierce stomping, triumphant twirling and dramatic arm raising, coupled with sporadic bursts of singing. Something like this:

Clearly, the kid has star quality.

Much has been made over the years about Disney and the portrayal of women and girls in its films as powerless, naive, one-dimensional and lacking agency, among other things. I’m not really writing this blog to address these issues, but I bring them up to acknowledge that I do find them legitimate. However, my husband and I take Lucy to the movie theater (or, as she calls it, “the movie movie,”) a few times a month as a treat (for her and for us), and we elected to show her this one. Twice, actually.

Which was perhaps our mistake, because she really only needs one viewing to get stuck on a particular quote or melody, and we should have realized that two viewings just meant we’d be hearing this song probably until we die.

I don’t particularly know what it is that Lucy finds so attractive in the character of Queen Elsa over, say, her sister, Anna, who arguably has a larger role in the film. And while “Let It Go” is obviously intended to be the movie’s Big Solid Number, there are lots of other songs in the mix I would have thought she’d like better, like the one with the awful singing snowman. But clearly she’s found something she likes about Elsa; maybe it’s her strong voice or her sweet pad. Perhaps it’s the fact that the whole song is about being isolated on a mountain where no one can tell you to stop turning stuff into ice or, for that matter, stop singing. It’s probably the fact that she’s got some crazy ice magic, and by the way, I hope she can like, construct Netflix or something with that magic ice or she is going to be super bored up there. Whatever the reason, sometimes it’s so obvious that Lucy wants to be Elsa.

I, of course, want her to be Lucy, and part of being Lucy is running around the house in her underwear singing at the top of her lungs until I have to curl up in a little ball at the foot of the couch.  Lucy has learned from her favorite song that it feels awesome to dance around and pretend to have mystical Scandinavian weather powers. I’ve learned to just let it happen. Though your ears be throbbing and your feet be accidentally stomped when you cross paths with a toddler in the throes of her finale, you’ve gotta let it go, mama, because three just doesn’t last forever. And if that wasn’t enough for you, here’s a god-awful cheesy metaphor: like the ice and snow in spring, these moments will melt and fade into the recesses of your memory and be over. And you have to let that go, too.

Anyway, I say all of that to say this: any agents out there want to sign my wildly talented and coordinated kid up for some multi-trillion dollar deal, come find me. I’m at the News, in the little office near the front that’s strewn with toys and has a toddler sitting in there who literally will not stop singing already, no matter how many cookies I offer her.

UPDATE, 11:16 A.M.: I did just manage to capture a few seconds of Lucy singing this song in her bedroom this morning by sneaking up on her with a recorder. The clip is below, and you can hear her turn around and see me recording at the end and abruptly stop singing.