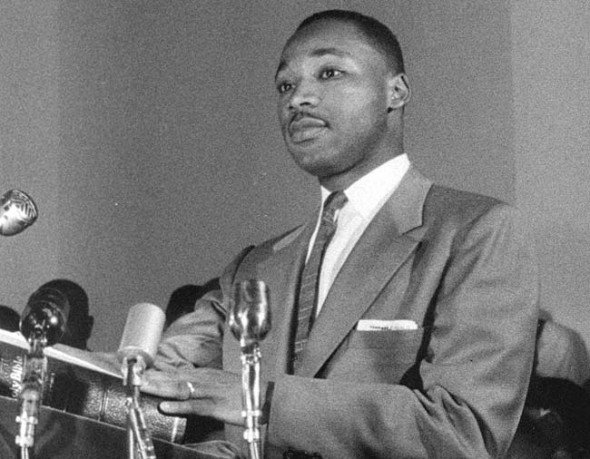 A rare film, “King: A Filmed Record … From Montgomery to Memphis,” will be shown as part of local events commemorating Martin Luther King Jr. day. The three-hour 1970 film, which was nominated for an Academy Award for best documentary feature, was only released during a special one-night screening in that year.

“King: A Filmed Record” will be shown at 1 p.m. on Sunday, Jan. 19, at the Little Art Theater and at 6:30 p.m. on Monday, Jan. 20, in Room 113 of McGregor Hall on the Antioch campus. Both screenings are free and open to the public. The filmmaker, Antioch class of 1949 Richard Kaplan, will lead a discussion following the showing at the Little Art.

“It’s something people need to see,” Kaplan said this week of his film, which documents King’s life from the 1955 Montgomery Bus Boycott to his assassination in 1968 using archival news footage without narration.

Antioch is partnering with the Central Chapel AME Church to present other activities commemorating MLK Day.

Antioch will host “Voices of Change: Songs and Poems of Freedom and Social Justice” at 7:30 p.m. on Sunday, Jan. 19 at the Coretta Scott King Center, Livermore Street near West Center College. The event is an open mic for community members and college students to share their thoughts on liberation movements and ideas.

On Monday, Jan. 20, an opening program for MLK Day will be at 9:30 a.m. in 113 McGregor Hall on the Antioch College campus featuring musical selections by tenor Christopher Smith, readings by Antioch students and a keynote address by the Rev. Joel King, R. a cousin of Martin Luther King, Jr.

At 10:30 a.m. the community will gather at Mills Lawn Elementary for the annual march through downtown and to the Central Chapel AME Church, 411 South High Street where at 11 a.m. a program will begin. This year the program includes performances by the Booth Family Drummers, The World House Choir, the Central Chapel AME Choir, Peace Maker Awards and an address by the Rev. William E. Randolph. A free lunch at 12:30 p.m. will be provided at the church.

At a panel discussion at Antioch at 2:30 p.m. on Monday, Jan. 20, participants will discuss issues of inequality and discrimination in the village and on campus. Panelists include Antioch alums Kaplan, Maceo Cofield, a development and recruitment officer at the University of Dayton, Amanda Cole, who works in community development and education and current Antioch student Megan Howes, who recently attended the Great Lakes College Association’s Students of Color Leadership Conference. The theme of the panel is “Where Do We Go From Here? Chaos or Community” which is the title of the final book by King and a speech he gave in 1967.

Read the full story in the Jan. 16 issue of the News.