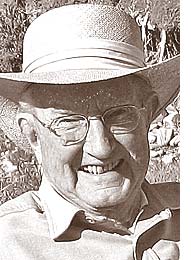 Lawson “Bud” Marsh began his journey in Denver, Colo. on April 21, 1920. He graduated from East Denver High School and came to Yellow Springs in the fall of 1938 to attend Antioch College where he majored in engineering and completed his co-op at Allison Engineering in Indianapolis. In 1941 he began flying secondary acrobatics and cross country as part of the Civilian Pilot Training Program at Springfield Airport and Vandalia. He was flying Sunday morning when Pearl Harbor was attacked.

Upon graduation from Antioch in 1943, he took a position with the National Aeronautics Advisory Committee at Cleveland Hopkins Airport. He joined the Navy’s V-7 program for college graduates that fall and in June, graduated, becoming a ninety day wonder and ensign. As an engineering officer, he was assigned to the aircraft carrier U.S.S. Chenango in the south pacific, providing ground support during landings in Morotai, Philippines, and Okinawa and transporting POWs from Nagasaki to Okinawa as peace was declared. Discharged as a 2nd lieutenant, he returned to Yellow Springs and soon went to work at Morris Bean & Co. as laboratory manager before retiring in 1978 as Director of Development.

In 1947 he married his lovely and beautiful wife Jean who was from Springfield and the granddaughter of Earl and Josephine Littleton of Yellow Springs. He was a loving father to his son Steve in Tucson and daughter Dana in Gilbert, Ariz.

He enjoyed many years of deep sea fishing in the waters off Florida, San Diego and Mexico with dear friends and spent a lifetime fishing and roaming the hills along the Encampment River in Wyoming. During his time in Yellow Springs, he served as scoutmaster of Troop 78 for many years. He was a member of the school board, the tree committee, and a trustee of the Tecumseh Land Trust. In the early 1960s he purchased a farm on Hyde Road along the Jacoby Creek and spent the next 53 years nurturing and maintaining the property. He was particularly interested in growing native prairie land in the lower field and identifying the various forbs and grasses there.

Those of us who were fortunate enough to have known him will miss his friendship, his humanity, his love of the land, and his gentle spirit. Thanks, Bud.

In lieu of flowers, contributions can be made to the Tecumseh Land Trust or the Yellow Springs Community Foundation.