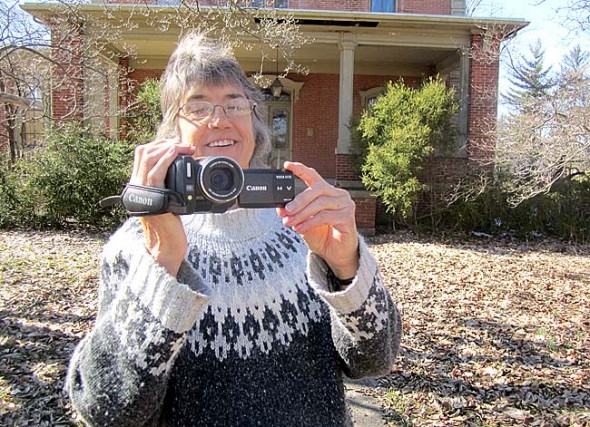 Local filmmaker Patti Dallas will screen the first part of a new documentary series on the village, “Yellow Springs — Exploring the Elements of Community,” in two one-hour sections over two consecutive Friday nights at the Yellow Springs Senior Center. The first section will be shown at 7 p.m. Friday, March 21, and the second at 7 p.m. Friday, March 28, with a discussion to follow. In her latest film, Dallas leans on interviews from some 30 villagers as she looks at the village’s early years through the present. (submitted photo by Eric Johnson)

What is it about Yellow Springs that gives the town such a strong sense of community?

That’s the question that local filmmaker Patti Dallas asks more than 30 local people in the first part of a new documentary series on the village, “Yellow Springs — Exploring the Elements of Community.”

In her latest look at the town she grew up in, Dallas said she hopes to “magnify who we are” for local people and others who admire Yellow Springs as the welcoming, small, diverse, tight-knit community it is.

Initially wanting to travel around the country to find out how other places lost or retained their sense of community, Dallas instead found the ingredients for building community right here.

“It’s a sense of dedication, a sense of awareness and an appreciation for this place. My dad [Meredith Dallas] said it must be the water,” Dallas said this week.

Dallas will screen her new film in two one-hour segments over two consecutive Friday nights at the Yellow Springs Senior Center. The first section will be shown at 7 p.m. Friday, March 21, and the second at 7 p.m. Friday, March 28 (not March 14 as initially printed in the Senior Center calendar).
Discussions with the filmmaker will follow both showings and audience members can bring a snack to share.

In the first film of her series, Dallas covers the village’s early years; why people came to town; Antioch College; local tensions around race; housing and peace; primary schools, sustainability efforts and Yellow Springs Kids Playhouse. Interviews with villagers, including Ruth and Tony Bent, Isabel Newman, Naomi McKee, Bob Baldwin, Al and Donna Denman, Michelle Burns and John DeWine, Wally and Evelyn Sikes and more, are intercut with scenes of village life that Dallas has shot over the years and historical photos courtesy of Antiochiana, Antioch College. Music is by local traditional and Celtic band Heartstrings.

After talking with dozens of villagers for the film, Dallas said she believes that Yellow Springs’ unique history, Antioch College and other major institutions shaped our town and that gathering spaces and occasions are vital to community. But above all, it’s the people who make Yellow Springs what it is.

“I think the essence of community is what’s within the individual — it’s not an outside agreement, it’s who we are that makes the community,” Dallas said. “It’s the sense of caring, compassion, initiation, all those things that are also the essence of being human.”

While the focus is on Yellow Springs’ positive attributes, Dallas doesn’t gloss over the contentiousness that often rears its head here, she added.
Dallas, 68, has dedicated much of the last 20 years documenting life in the village through films such as “Yellow Springs and the Whitehall Farm” and “A Portrait of Yellow Springs — Through the Eyes of Our Elders.” She has also produced shorter videos for local public access Channel 5 and family history and memorial videos for local people. In recent years she has brought her high-definition mini-DV camera with her nearly everywhere and has compiled innumerable hours of footage for her films, which she hopes will document life here for future generations.

“I really enjoy the historical documents and books we do have here, but I wish someone had been doing this back then,” Dallas said.

Dallas’ foray into filmmaking began before she even had a video camera. Living in a Quaker community in British Columbia in the early 1970s, one day on a winter walk she found a frozen waterfall and thought: “How do I capture the beauty of this?” She responded with a kind of proto-film by pairing photo slides with music she recorded on a two-track tape recorder that she then screened for her community.

“I felt I was holding a mirror up to the community,” Dallas said of her early slideshow “films” documenting life there. She went on to apply for, and receive, a grant from the Canadian government to do the same for three other small towns in British Columbia. Over the course of a summer, Dallas recorded the music and collected the slides of local people in an attempt to “capture the essence of their community.”

Dallas also spent time as a banjo-playing folk singer and produced several award-winning children’s videos featuring her music before returning to her hometown of Yellow Springs in 1996 and picking up filmmaking in earnest. As the coordinator for local public access, Dallas produced pieces about local reflections on the 9/11 terrorist attacks, dance in the community and Spring in the Springs, among other topics. She then realized that interviewing village elders should be her priority.

“When I moved back here I was aware that my parents’ generation was getting older, and I sense they played a big part in the character of the village,” Dallas said. She went on to interview a number of local icons for her 1999 film “Portrait of Yellow Springs,” many of whom have since died, including Ernest Morgan, Earl Hull, Sr. and Hardy Trollander.

Ten years after releasing that film, Dallas set out to find a new set of elders to interview, but then decided to open it up to interviewees of all ages and focus her theme on the essence of Yellow Springs. But with such a broad agenda, she saw one film become two, and perhaps more, in a series with no definite end in sight.

Future films will likely explore Yellow Springs business and civic life, greenspace efforts and local ecology, the arts and music groups here, she said. And instead of producing DVDs, Dallas hopes that a website could eventually host her material.

Dallas, who edits from an office at the former Vie Design Building on Xenia Avenue, has a slower and more meditative filmmaking style in contrast to the fast-paced sound bite-driven documentaries common today. Dallas eschews narration, relying instead on interviewees’ words, and she tries not to push her agenda through a film, she said.

“When I work on a project, I try to just provide the technology for people to share what they’re about,” Dallas said. “I try to be in tune with the person I’m talking to and try to not have an agenda of my own.”

Added Dallas of the artistic aspect of filmmaking: “The film editing to me is sort of like making a collage. You’re putting a puzzle together and seeing how they fit. For me it’s a very organic process.”

To view clips of the film, visit http://yellowspringsacrossthegenerations.blogspot.com/