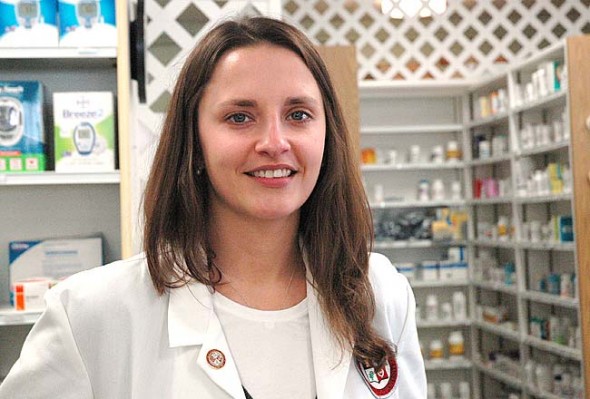 Emma Robinow, whose mentor was the late Tim Rogers, is the new pharmacist at Town Drug. (Photo by Carol Simmons)

The new part-time pharmacist at Town Drug is a familiar face -— both in the village and at the pharmacy. Emma Robinow, 28, grew up in Yellow Springs and completed her pharmaceutical residency in town under the mentorship of Tim Rogers, who died in January.

She says that while she is thrilled to be working at the local pharmacy, her hiring is nonetheless bittersweet.

“I love it there. The people are wonderful, the customers are wonderful. But I really wish Tim was still there,” she said.

Rogers served as a guiding hand and role model throughout Robinow’s studies, she said. During her training with him, she along with another local student, Megan Lents, worked with Rogers as he implemented a medication therapy management program, a more comprehensive and holistic approach to patient care, for Town Drug customers.

He also took an active interest in her job search. “His hope was to eventually retire and I would take his place,” she said. “I’m glad I can fulfill his wish for me working there, but I really wish he was still there.”

Robinow’s first day at Town Drug as an accredited pharmacist was the day after Rogers’ death. It was hard, but also inspiring.

“It was nice to be there after Tim passed away; people came in and talked about how he helped them. It was really nice to hear how he affected people.”

It was as though Rogers was still offering lessons about being a caregiver.
The lessons were important to Robinow, who discovered early in her schooling that she wanted to be involved in direct care. Strong in math and science, the 2003 Yellow Springs High School graduate entered Wittenberg University with the intention of studying chemistry. About the same time she also became involved in helping with the care of her mother’s ailing parents. She said she quickly realized that the research-oriented educational track she was on was not the direction she wanted to go. She switched her focus from pure chemistry to food and diet and transferred to the University of Dayton, where she earned a degree in dietetics.
“Nutrition was interesting, and it could also affect people,” she said.

After a year’s residency as a dietician at Kettering Hospital, she entered the four-year doctor of pharmacology program at Ohio State University. She graduated this past May.

It’s been a big year professionally and personally. After earning her doctorate last spring and getting a full-time job with the Kettering Health Network, Robinow got married in September. Her husband, Jacob Schmidt, is an engineer at Wright-Patterson Air Force Base who is nearly finished with work on a Ph.D. in engineering from Ohio State. The couple bought a house just north of the village off Jackson Road, where they have two cats and are also finding pleasure in keeping bees. Once an avid tennis and volleyball player, Robinow said continuing to work full time for Kettering Health Network and now part time for Town Drug hasn’t left much room for those pursuits. But she’s not complaining.

Robinow said she loves living and working in her hometown, where her parents, Pat and David Robinow still live in her childhood home.

There’s something special in that familiarity, she said. And it’s shared by her co-workers, including the full-time pharmacist Janice Blandford. “People who work at Town Drug really know the patients and they know what’s going on in their lives,” Robinow said. “Tim said that this was the best job he ever had because he got to see his friends all day. They know about you, they care about you, you care about them. It’s just a really nice, unique situation.”