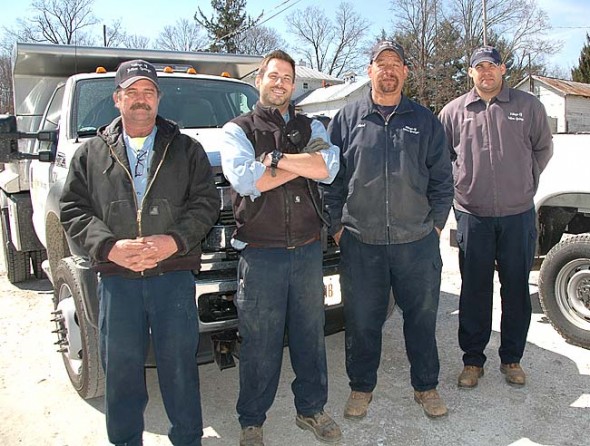 In his nine years working for the Village, Superintendent of Streets Jason Hamby says this winter was the worst he’s experienced on the job.

Not that the harshness of the weather will come to anyone’s surprise after a season that meteorologists noted for its multiple polar vortexes and record-breaking low temperatures.

But the four-person crew that clears the public roadways has a special familiarity with this year’s extremes wrought courtesy of Mother Nature.

“We put in a lot of overtime hours,” Hamby said. “From December through February, we averaged 8 to 14 hours of overtime per two weeks, per person.”

For the sake of safety, Hamby tries to maintain eight-hour work shifts, but “sometimes we run over,” he said. “This year we had some guys (working) up to 12 to 14 hours” before going home.

“We had several storms that we had to run all night.”

The first month of the year was especially brutal on the crew’s schedule. “In January, we were out every Saturday moving snow,” Hamby said.

And that’s in addition to the crew’s other responsibilities, including “Christmas tree pickups for the Boy Scouts … Village building maintenance and parks and rec.”

“At the (John Bryan Community Center) building, we had the boiler go out twice,” Hamby said. Plus there were “frozen pipes and frozen down spouts.”

Winter is supposed to be his team’s slow season, Hamby said, with summer mowing and parks maintenance typically keeping everyone busiest.

The crew members agree that they’ve had enough of winter 2014. “I’m ready to start mowing,” crew member Scott Gochenouer said with a grin.

The series of storms that came through the region early in the year was relentless. And with 26 miles of Village roadway to clear — “over and over again” — crew members regularly found themselves behind the wheel of a truck. “I know this town by heart now. I could close my eyes and drive around this town,” Hamby said. “It’s gotten very interesting sometimes…you don’t know (what’s there). But working for the Village and seeing the roads every day, you get a sixth sense.”

The Village doesn’t have a pretreatment process in advance of anticipated storms, Hamby said. Typically, the crews start plowing and spreading salt after about an inch of snow accumulation. Further complicating their jobs this year was a statewide salt shortage.

“From mid-January until the beginning of March, we were unable to get more salt,” Hamby said.

The last order received was 71 tons. All told, the Village purchased and used 260 tons of salt this winter, before the supply ran out. The frequent below-freezing days didn’t do the Village any favors, either.

“I think we did a very efficient job getting the initial storm off of the roadways, but the cold kept refreezing (the roads), which delayed some of our process. … It’s the smaller storms that use most of our salt. We lay it down, it refreezes, and we have to lay down more.”

After hours on the road, staying alert can be a challenge. “It kind of puts you in a trance,” Hamby said. A truck’s flashing light often creates a strobe effect in the falling snow that can be “hypnotic.”

The crew members counter those effects with “plenty of coffee,” and they “keep CB radios on (to listen) for any police and fire rescue traffic.”

They also keep their windows rolled down, despite the sub-zero temperatures. Not only does it help them stay alert, but it also allows them to hear what they might not be able to see.

The Village has four plows — one 11-foot, one 10-foot, and the other two about nine feet each — that the crew attaches to the front of four trucks with salt spreaders in the back.

“We’re asked, ‘Why can’t we push the snow in another direction.’ But the two big ones are stationary plows,” Hamby said.

During smaller storms they’ll start off with two trucks on the roads, but all four frequently were out at the same time this winter.

Once back at the Village’s Sutton Farm facility, they trucks have to be cleaned before their next run.

Winter cleanup continues in other ways as well. The aftermath of frequent freezes brings springtime potholes, and the street crew began patching work about three weeks ago.

“We’ve purchased seven tons of coal patch to fill the potholes and problem areas to prevent them from getting worse.” That will serve until “we can fill them with asphalt” later, Hamby said.

Road work may be tough, but “I wouldn’t have it any other way,” Hamby said. “It really is a joy to work for the Village. We really appreciate the residents understanding what we were going through this harsh winter.”