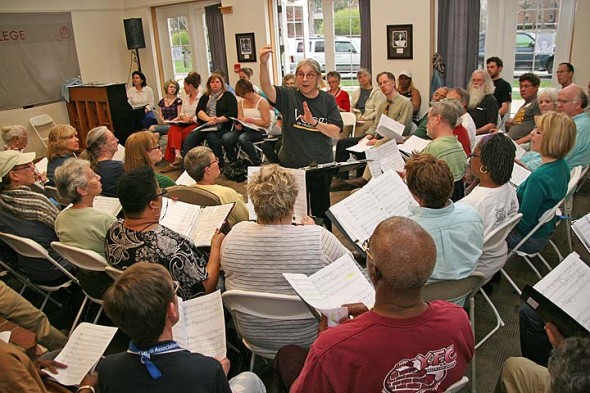 “Freedom is never really won. You earn it and win it in every generation.”

The late Coretta Scott King, who penned those words a half century ago during the Civil Rights Movement, continues to inspire a Yellow Springs social justice choir that sings at prisons and in support of causes like peace, HIV/AIDS education and marriage equality.

The World House Choir, formed last year in association with Antioch College’s Coretta Scott King Center for Cultural and Intellectual Freedom, is “guided by her spirit,” in the words of choir director Cathy Roma. Now the choir honors King at a celebration of what would have been her 86th birthday.

“What [King] says is that every generation has to struggle for freedom and I think that’s very true,” Roma said this week. “If we were to look at voting rights, women’s health and reproductive freedom, LGBT issues, for example, we take two steps forward and one step back.”

The World House Choir performs with 70 members at a celebration of King’s birthday at 4 p.m. Sunday, April 27, at the Central Chapel AME Church, 411 S. High St. The event is free, childcare will be provided and an interpreter is available for the hearing impaired.

Many of the songs selected for King’s birthday celebration harken back to the civil rights era, including traditional African-American spirituals like “Over My Head,” “Sometimes I Feel Like a Motherless Child,” and “Down By the Riverside.” King was a classically trained vocalist who lent her voice to freedom concerts and rallies in support of civil rights causes before and after the death of her husband, Martin Luther King Jr., according to Roma.

Prior to meeting her husband, Coretta Scott studied music and education at Antioch in the 1940s on a full scholarship through the school’s interracial education program, one of the first African Americans to study at Antioch. King last visited the campus in 2004 to speak at graduation and approved the use of her name for a new center in 2005.

The Coretta Scott King Center for Cultural and Intellectual Freedom opened in 2007 but was shut down the following year when Antioch closed. The center was briefly revived in 2012 under the direction of the Reverend Derrick Weston, who left last year. Antioch is now currently interviewing candidates for the position of director and will review a proposed budget that also includes an administrative position, according to Kevin McGruder, the Antioch assistant professor of history who is chairing the search committee.

At her birthday celebration, there will also be performances by guest percussionists and vocalists and short talks by McGruder and Erin Smith-Glenn, a Central State University art instructor and portrait artist who drew the striking Coretta Scott King portrait “Queen King.” By rekindling the memory of King, the World House Choir can gain additional motivation to do the work of today, which begins with understanding who King was and what she accomplished.

“A lot of people only know her as the wife of MLK Jr., they don’t know that she had her own activism,” McGruder said. “A lot of people don’t realize she was classically trained-musician and that she didn’t leave that behind, she used that in the civil rights movement.”
King also opened the King Center in Atlanta, Ga. to continue to advance non-violent social change and successfully campaigned for a national holiday to commemorate her late husband’s birthday. She wrote several books and later participated in the women’s rights and LGBT rights movements.

In the spirit of King, in the days following King’s birthday celebration, the World House Choir will perform at the Warren Correctional Institution and the Madison Correctional Institution with men’s choruses that Roma started at the prisons. It’s part of the choir’s mission to raise awareness about mass incarceration in the U.S., and also to dignify prisoners who “even though they have made mistakes, … are still people and have worth and value,” Roma said.

The World House choir is a diverse group of people — from grade schoolers to 90 year olds — who sing together to be in community but also to learn about and support social justice causes, according to Roma.

“It’s about people coming together, but it’s also we want to help other people who are trying to make positive social change,” Roma said. “It’s a way of doing our own education, our own culture work, our own outreach for justice and to learn as well.”

Other upcoming concerts include a Dayton benefit for Poz4Poz, a Miami Valley organization that provides education and support for those with HIV/AIDS, on July 19, a commemoration of the United Nations’ International Day of Peace in Yellow Springs on Sept. 21 and a local pep rally concert for marriage equality on the eve of Coming Out Day and Yellow Springs Street Fair on Oct. 10.

Roma will sing with three other Yellow Springers, including tenor soloist Martin Bakari, at the 200th anniversary of the St. John’s Unitarian Universalist Church in Cincinnati on May 3. And Roma, professor of music at Wilmington College, will also soon accept a prestigious award given by the Cincinnati Enquirer to eight “pearls of the community,” for her 30 years of directing choirs and teaching music. Roma moved to Yellow Springs from Cincinnati a few years ago.

Music has the power to effect personal and social change, has accompanied every revolution and is part of every struggle for justice, Roma said.