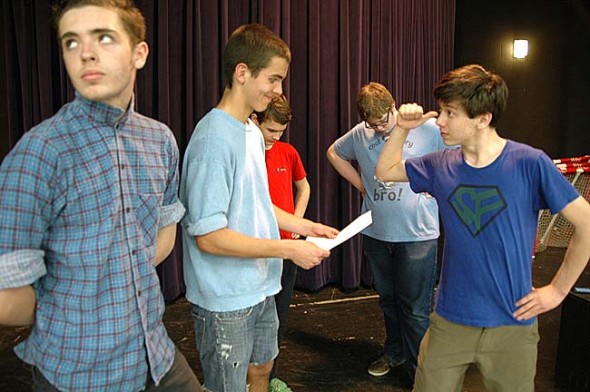 “My Brother’s Keeper,” a vignette about Cain and Abel including, from left, Blaze Wright, Sam Crawford, Jeremiah Scott, Bear Wright and Josh Seitz, is part of the Yellow Springs High School One Acts showing this weekend at Mills Lawn auditorium. Friday and Saturday shows start at 8 p.m, Sunday’s show is at 2 p.m. (Photo by Lauren Heaton)

YSHS One Acts for stunts, funnies

For Jeremiah Scott, the best thing about the Yellow Springs High School One Acts is, “it’s the one theater event where we’re all uninhibited and free to do whatever we want.” For Josh Seitz it’s the extreme humor — on the whole a step above sophomoric. To Windom Mesure, the best thing about One Acts is that they’re by students, about students, for students. And to Shekina Williams, the One Acts are a “great and affordable way to support YSHS Drama Club.”

Whatever the One Acts are to local audiences, the one rule of the student-led theater production is there are no rules, and what happens each night depends on the mood of the actors and the alignment of the stars. Though this year’s One Acts have a roughly hewn set of eight original scripts and a group of directors and actors that ebbs and flows each day, the only certainty is that the shows this weekend will entertain, if only by sheer surprise — for audience and performers alike.

“None of this is set in stone and everything is subject to change,” One Acts Coordinator Ara Beal said in an interview this week. “What people will see when they come — there are no guarantees.”

The YSHS Theatre Arts Association will present the One Acts on Friday, Saturday and Sunday, May 2–4, at Mills Lawn. Friday and Saturday performances begin at 8 p.m., and the Sunday performance begins at 2 p.m. Tickets are $10 for adults and $5 for seniors and students, and will be available at the door. The money raised from the One Acts is used to support the McKinney and YSHS theater program, which produces a fall play and a spring musical each year.

As the centerpiece for the unexpected, the One Acts have developed a tradition of including at least one improvisational piece, designed this year by Anna Knippling and Alex Kellogg. The untitled sketch, still a work in progress, is a story about performance art and may involve an appearance by Lady Gaga. The actors are excited about what the improv might bring about, such as the creative scraws that last year’s improv piece drew from Blaze Wright.

As for the vignettes with slightly more structure, Shekina Williams is directing “How Not to Dress” written by Francesca Brecha and Jennifer Lawson. The show is based on the makeover reality television series “What Not to Wear” in which two style gurus find a shabbily dressed person and reinvent their look. The One Acts version leans toward the satirical.

One play centers around a group of teenagers who are texting and talking about Snapchat when a serial killer shows up.

Another piece is a murder mystery called “PBS Preschool.” In it, Cookie Monster, Bob the Builder, Elmo and others are working hard to solve the murder of Thomas the tank engine.

Nadia Mulhall wrote and is directing “Splinterella,” about a lumberjack Cinderella. Scott, Wright and Sam Butler wrote a piece inspired by the Biblical story of Cain and Abel. And Wright is also directing three infomercials he wrote about several products, such as a gadget for people who forget to disrobe before they shower — “it cuts your clothes off for you,” Jack Lewis said.

Lewis is also directing a more serious one act called “The 99th Problem,” about two racist cops who practice a discriminatory brand of law enforcement. The show “could offend some people, but you have to look at it as a play,” Lewis said. The show is written by Michael Gentile and Alex Strolger.

Though the students are largely in control of the One Acts production, Beal maintains a standby presence and feels confident that this year’s show will be a family-friendly experience — barring any unforeseen mishaps with the improv. The more serious themes in “The 99th Problem” may play last, following an announcement inviting those who wish, to leave early.

“Anything they do or say they would have to be able to say over the loud speaker at the high school,” Beal said. “There may be issues that prompt discussions for younger kids.”

And even though the One Acts are always full of surprises, Beal also likes to ensure that the unforeseen does not include any harmful stunts.

“Ara’s basically just there to make sure we don’t catch ourselves on fire,” Seitz said.

“Because the year she wasn’t here, everyone caught on fire,” Scott said — a sample of the improv to come.