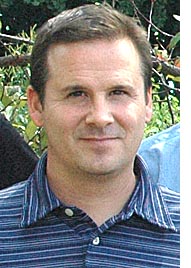 Yellow Springs Athletic Director Steve Rossi is leaving this month to become the full-time athletic director of Roger Bacon High School in Cincinnati. Rossi was hired in 2011 as a part-time AD for Yellow Springs and made the 55-mile commute from his home in Cincinnati to support an athletic program with a foundering budget. He started a sports booster program that, with the right leadership, has the potential to keep the school sports program strong. (News Archive Photo by Lauren Heaton)

On any given day during the school year, dozens of students from McKinney and Yellow Springs High School can be seen releasing their energy on the soccer field, sprinting for a lay up on the basketball court, diving for a run on the baseball field, or participating in the many other sports the school has traditionally offered. But not all sports are equal, especially where gate sales are concerned. And since the highest grossing football program ended four years ago, the entire athletic fund has struggled to keep up with basic needs each sport has to field a team.

At their meeting June 12, school board members briefly discussed the state of the athletic fund, which ended in deficit this year, for the fourth consecutive year. While expenses for athletics have dropped considerably from an annual average $50,000 since football ended in 2009, revenue has fallen further to a 10-year low of $24,000 this year. And though traditionally the district had transferred anywhere from $6,000 to $20,000 annually to the athletic fund to supplement cash flow, the district has not provided any support to the fund since the 2009–10 school year, when the district as a whole was facing deficit spending.

To plug the gap for the past four years, the fund’s cash surplus has helped to balance the sports budget, but annual athletic deficits have reduced the surplus from almost $18,000 in 2011 to $1,500 this year. And partly due to falling gate sales, which dropped from an average $30,000 annually to about $20,000 in 2011 and fell to a 10-year low of $16,000 this year, the athletic fund has nowhere left to fall.
At the meeting, District Treasurer Dawn Weller recommended a permanent transfer into the athletic fund.

“Revenues keep dropping and we keep lowering expenses,” but in the end, she said, “The athletic fund is in the hole.”

Superintendent Mario Basora told the board at last week’s meeting, “We spend about the least amount on athletics than just about any school I’ve been in,” adding that the budget cuts are “to the extent that it’s a little dangerous” for adequate conditioning to avoid injuries. “We’re way behind because we haven’t invested in facilities,” and other equipment. And when students from other districts come to Yellow Springs, Basora said, “it doesn’t look good. It’s a real challenge for us.”

What does seem lacking here, Rossi said, is a loud audience at the games. The low revenue from admissions this year tells the story, and Rossi thinks Yellow Springs can do better.

“We need more attendance — people to watch and give the kids an opportunity to showcase what they’ve worked hard for,” he said. “We need student attendance too — kids that can make some noise. If I had 20 paying students versus 30 free ones who can make a lot of noise, I’ll take the noise any day.”

Greater attendance would also support the sports budget. Of this year’s athletic fund expenses of $30,000, most was used to pay for officials (especially soccer and basketball), equipment and uniforms, and entry fees for tournaments, which the school doesn’t want to deny to students who excel in their field. The fund also covers facility rental expenses for non-revenue sports, such as swimming and golf, and to some extent, cross country and track. Athletic programs can be self-supporting if investment for each sport and its needs are consistent, Weller said. Yellow Springs is uniquely challenged by small numbers of students, who don’t have the ability to sustain full teams for a wide variety of sports. A strong football team, for instance, needs to have about 23 fully committed players, according to Rossi. The last time Yellow Springs recruited for football, only 11 students signed up full time, with nine others split between football and soccer, which occur in the same season.

To help shore up the athletic fund, last year Rossi helped to organize a sports booster club, led by Gerry Simms, a Village Council member and grandfather of two YSHS athletes. The 10 volunteers, including three of Simms’ children, and a large bunch of YSHS students, sold enough concessions during soccer and basketball games to raise about $6,000 for the teams. The money bought gloves and hats for the soccer team, warm-up shirts for McKinney and high school basketball teams, bats and equipment for the baseball and softball teams (and nothing for the volleyball team, whose coach Christine Linkhart and players raise their own money through a community carwash.) The group also partnered with regional businesses to help purchase a new indoor scoreboard, and Rossi hopes to do the same for an outdoor scoreboard.

The boosters, with soccer Coach Ben Van Ausdal, also plan to inaugurate a weekend soccer tournament next month with about 30 teams from across the state to raise money for the school athletic fund. Simms, who has suffered from health issues this year, wants to step down and hopes to use the event to rally more volunteers to the booster program, and perhaps attract some new leadership as well. This month Rossi announced that he is leaving his part-time position to take a full-time post as athletic director of Roger Bacon High School in Cincinnati.

In the meantime, other community partners are providing support where it makes sense to do so. The Village of Yellow Springs is resurfacing the baseball and softball fields at Gaunt Park, where due to a wet spring, the high school teams were unable to practice or play this year until April 1, a very late start date. The Village has $25,000 budgeted to recondition the fields, and the school will attempt to use Yellow Springs Endowment for Education grant money to add new grass and sod.

The baseball and softball teams have been successful in fielding teams for two to three years, “so we need to find a way to support those efforts…to make our fields something our kids can be proud of,” Basora said.