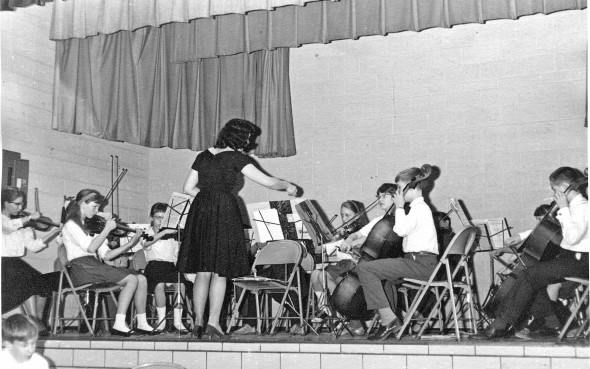 The Yellow Springs Summer Strings and Band Program will celebrate its 50th year as a summer music program for local children with a cello choir for alumni this Saturday, July 5, at 5 p.m., followed by a full orchestra performance. Shown above is an early concert with Summer Strings’ founder, Shirley Mullins, who continues to direct the program. (submitted photo)

Yellow Springs Summer Strings winds down— Come one, come all to Grand Finale

Two weeks ago, the Yellow Springs Summer Strings and Band Program had its Grande Finale concert outside at Mills Lawn. The youth played their violas and clarinets to the tune of “Cherokee Chief,” “Slavic Air,” and an all-camp sing to “The Power of One.” The event was not so unusual, as the local program that trains beginner youth to play instruments of all kinds has been ongoing for the past 50 years. But it is unusual that a town the size of Yellow Springs has a feeder program for its school orchestra and band ensembles.

And at 79, the person who started it all is still leading the charge.
“I want this program to continue in perpetuity — I will see to it that it does,” Shirley Mullins said during an interview last week. “It just can’t stop — it’s too important.”

To celebrate all that the local community music program has accomplished and all that is still to come, the musicians will host a party featuring any alumni of the summer strings and band program playing in one more Grand Finale concert. The event, which is chiefly a reunion of local music lovers with a concert on the side, takes place on Saturday, July 5, on Mills Lawn. Cellist alumni can join a cello choir at 5 p.m., and the rest can jump in for the full orchestra performance to follow. The event will conclude with the time-honored post-concert cake and punch.

The fact that Yellow Springs has a string program at all is somewhat unusual. Many schools in the area, even larger ones such as Xenia and Beavercreek, have just band programs. It started out that way in Yellow Springs schools as well, according to Mullins, with students who had to pass a test to be included in the band. To Mullins, who had conducted the youth orchestra in Iowa City but felt that music was for absolutely everyone who wanted it, the system was exclusive. So she gathered some fellow musicians, including Mary Schumacher, and together they started a youth orchestra to complement it.

“It was June 1964 — and 25 kids showed up for the first rehearsal,” Mullins said matter of factly. Some of the children were Carl and Bruce Schumacher, Julie Morgan, Billy and Steve Holster and Christopher Stave.

At first the program was community-based, separate from the schools, and based on the edgy new Suzuki method of immersion for very young students (Shin’ichi Suzuki actually lectured at Antioch College in the 1960s, using the Yellow Springs youth orchestra in a demonstration). But after building a small community youth orchestra, Mullins wanted to connect with the schools to offer the program more widely.

By 1970 Yellow Springs middle and high school had expanded its music program to include a full-time band director and Mullins as a part-time orchestra director.

“At the high school the orchestra was always a part-time program, but I was determined that the kids would have a full-time experience,” she said. So between raising a family and performing as a cellist in her own professional ensemble, the English Trio, Mullins grew a star-studded orchestra program with many students who went on to music careers. She took the groups to orchestra contests each year, mostly competing in class B for small schools and typically receiving the highest ratings. And in the 1990s, the music program extended down into Mills Lawn, to start students early on both band and string instruments.

And always the Summer Strings and Band program continued to interest young students in taking up a new instrument, or older music students to deepen their ability. For the past nine years, Dennis Farmer, who directed the high school band for about 10 years in the 2000s, has added band instrument instruction to the summer camp, and Cindy Lincoln has brought voice instruction into the mix as well. Current all-school band and orchestra director Brian Mayer also helped with this year’s camp.

Under the program’s original rubric of “each one, teach one,” the older students continue to teach the younger ones, Farmer said, which fosters independence and helps them grow as leaders.

“It gives kids who are really excited about playing, who are practicing a lot, a chance to really dive in,” he said. “Through a mix of private lessons, ensemble instruction, master classes, duets and trios, music theory, conducting and singing … it acts as a nice preparation camp for kids who will go away for overnight immersion camps later in the summer.”

The Yellow Springs Youth Orchesetra Association now also supports an orchestra, conducted by Mullins, for adults who want to learn a new instrument or get better at one they already play. And though the group used to get regular donations from United Way, now its support comes largely from tuition, private donations and small fundraiser concerts. The current president of the YSYOA is Selwa Whitesell, and the group’s treasurer is Susan Finster.

But Mullins is determined to keep it going, especially to encourage students who might not think of themselves as musicians, but who Mullins knows will learn if given a chance.

“There is this philosphy that only your best players can perform,” she said. “I beg your pardon. If you can play Twinkle, Twinkle, you can perform. That’s my philosophy, and it will always be my philosophy.”
For those who want it, there will be a rehearsal for the alumni concert Thursday, June 5, at 7 p.m. in the high school music room. Another pre-concert run through will occur the afternoon of the event, July 5th at 3:30 p.m. at Mills Lawn. Email DFarmer2663@yahoo.com for more details.