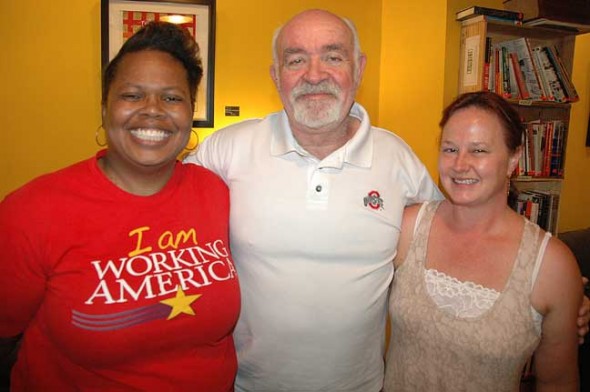 Local activists with Working America Shonda Sneed, left, and Tanja Rensch, along with organizer Ed Browning of Fairborn, have been pressuring Ohio Rep. Rick Perales (R-Beavercreek) to explain his decisions on changes to Ohio voting laws. (Photo by Megan Bachman)

Fired up on voting rights

A local community action group says that Ohio Rep. Rick Perales, in his first term representing western Greene County, has avoided scheduled meetings with them since he joined in approving changes in Ohio voting laws which some critics see as unfairly affecting African-American and low-income voters and making it easier for Perales and his fellow Republicans to defeat election opponents.

Since early this year, Shonda Sneed and a group of about 15 fellow villagers who are members of the local Working America Community Action Team have demanded that Perales explain his votes. The legislation signed by Gov. John Kasich in February reduces the days and hours of early in-person voting and makes it more difficult for absentee votes to be counted.

The local Working America Community Action Team, a chapter of the national AFL-CIO affiliate, blames Perales for his role as a member of the House Policy and Legislative Oversight Committee, which held numerous hearings on the voting bills over the winter, as well as his votes as part of the General Assembly to approve the laws.

“It’s all about reducing access to people with specific political leanings to favor the party in power,” explained Tanja Rensch, a local organizer with the Working America Community Action Team, which covers Greene, Montgomery and Clark counties. The measures will be in effect for the November general election.

Dan O’Malley, state director of Working America, said Perales has refused to defend his votes, missing or backing out of meetings in Yellow Springs and Xenia at the last minute and frustrating efforts to get an answer.

“This is someone who cast a critical vote on this issue so we would like an explanation as to why he supports these voting restrictions,” said O’Malley. Working America, a membership organization that represents working families, boasts more than 1 million members in Ohio and over 9,000 in Perales’ district, O’Malley said.

According to his office, Perales has not made any public statements as to why he okayed the voting changes but was prepared to explain his votes until receiving advice from a House lawyer that he not comment because of a pending federal court case on the matter.
Last week, the U.S. Department of Justice joined a lawsuit previously filed by the Ohio American Civil Liberties Union and other groups on the grounds that the laws violate the federal Voting Rights Act by making it harder for African Americans to vote.

Perales said this week that he and the Community Action Team have had differences of opinion over the proposed locations for the group’s round table discussions, which Perales preferred were held in a neutral location such as Xenia instead of in Yellow Springs so more diverse perspectives would be present. Perales added that he frequently meets with his constituents to gather expert information and viewpoints before voting or to explain his votes and that he doesn’t have a problem hearing from Yellow Springers despite the fact that many here disagree with him.

“The folks in Yellow Springs are my constituents and I represent them,” Perales said.
Meanwhile, Sneed continues to pepper Perales’ phone line and email inbox with questions and comments, she said. The native Yellow Springer, an engineer-turned-activist, said her Community Action Team has focused its efforts on Rep. Perales because they disagree with most of his decisions. Previously the group confronted Perales at a round table discussion it organized over his position against Medicaid expansion in Ohio, Sneed said.

“I don’t find the decisions he has made have been best for my community,” Sneed said of Perales.

Perales, of Beavercreek, was elected in 2012 in the state’s 73rd house district, which, in addition to Yellow Springs and Beavercreek, also includes Fairborn and Clifton.

The local Working America Community Action, started last year, holds its next organizing meeting 6 to 8 p.m. Monday, August 11, at the Yellow Springs Community Library. The meeting is open to the public.

Voting changes set for November
This fall, Ohio voters can expect one fewer week for in-person early voting, no early voting hours on evenings and only one full weekend of early voting — the weekend before the election. Changes to absentee voting rules also make it easier for election officials to throw out absentee ballots that contain a mistake and make it more difficult to obtain an absentee ballot, according to ACLU Ohio.

Early voting begins Oct. 7 and the general election is Nov. 4. The Greene County Board of Elections will post official hours as the election nears.

According to voting rights advocate Ellis Jacobs of the Miami Valley Voter Protection Coalition, none of the new measures help ensure all Ohioans have equal access to the polls.
“All of them make it harder for people to vote or less likely that valid votes will be counted,” Jacobs said.

The new measures result from a combination of new voting laws passed by the Ohio General Assembly and new rules announced by Secretary of State Jon Hustead, which initially disallowed voting on the weekend and Monday before the election (a court order reinstated those days). Ohio Senate Bill 238, on which Perales voted yes, specifically eliminated the so-called “Golden Week,” a week when voters could both register and vote early at the same time. That cut the number of early in-person voting days from 35 to 29.

Proponents of the voting changes taking place in states from Wisconsin to North Carolina say they are doing so in the name of uniformity, fraud prevention and cost cutting. Some Ohio lawmakers have additionally noted that Ohio still has more in-person early voting days than most other states.

But Jacobs sees the moves as politically-motivated, since lawmakers refuse to improve voting in Ohio by addressing long wait times at polling locations or allowing online voter registration. In addition, opponents say fraud instances are rare while the ”uniformity argument is a red herring,” Jacobs said.

“Uniformity would be great if all Ohio’s counties were uniform, but there are some counties with more than 500,000 voters and others with less than 10,000,” Jacobs explained. “When polling locations are only allowed to be open hours that work for smaller counties, you see problems in the larger ones.”

Another problem is that only one in-person early voting polling location is allowed in each county, Jacobs said. Recently Hustead drew criticism from some Cincinnati lawmakers when he cast the tiebreaking vote on the Hamilton County Board of Elections to move its early in-person location from downtown to a suburban area far from some inner city neighborhoods.
According to activists with the local Working America Community Action Team, cutting access to early and absentee voting disproportionately affects African-American voters, who tend to use those options at higher rates than white voters. For example, a 2008 report by the Franklin County Board of Elections showed that African Americans used early in-person voting at more than two times the rate that white people did.

In addition, the Franklin County study found that two thirds of early in-person voting took place after 5 p.m., and a full 82 percent of early in-person ballots cast were during either after hours on weekdays, on weekends, or the Monday before the election. This November, there will be no voting hours after 5 p.m. (either on weekdays or weekends), and only one weekend of early voting, along with one additional Saturday.

Sneed, who is African American, sees efforts to disenfranchise black voters as the beginning of a return of Jim Crow laws, and though she has not been kept from voting, she fears that someday her vote will be affected too.

“Growing up my parents told me if you see something wrong and don’t do anything about it, you are part of the problem, not part of the solution,” Sneed said.

According to O’Malley of Working America Ohio, in 2004 Ohio saw long lines and voters giving up on voting, after which a new slate of laws expanding early and absentee voting was ushered through. It is these laws that Republican lawmakers are slowly chipping away at, which O’Malley sees as a threat to Ohioans’ basic rights.

“Voting is a fundamental right and we should be making it as easy as possible for folks and not more difficult,” he said.

Working America has been involved in voting changes since the cuts also affect the working families the group represents, O’Malley said. Those working multiple jobs, regular weekday hours or who are not able to leave work to vote will all be affected by Ohio’s new voting rules, O’Malley explained, as their hours “might not mesh with the new hours.” While the federal and state chapters of Working America are also targeting voting laws, local Community Action Teams ultimately choose the issues they will focus on, O’Malley said.

Troubles with Perales
Activists with the Working America Community Action Team said this week they are frustrated by repeated attempts to meet with Perales about his role in state voting changes. While Perales attended a round table discussion in Yellow Springs on Medicaid expansion last year, he became more difficult to pin down for a similar discussion on voting rights here, with excuses that were “inconsistent,” they said.

Perales said he takes full responsibility for missing a public meeting on voting changes the Community Action Team organized in May, which was due to a scheduling error. After that negotiations over a venue for the rescheduled meeting became more difficult as organizers pushed for a Yellow Springs location. But Perales remains open to meeting with the group again in a more neutral site, he said.

“If I’m invited to a round table discussion there should be diverse perspectives and no disrespect meant, but I won’t get it in either Cedarville or Yellow Springs,” he said.
Perales added that he plans to comment on voting changes in the future when the lawsuit is resolved and generally believes it is important for elected officials to explain their votes.
“If an elected official won’t tell their constituents why they voted on an issue, they shouldn’t be voted in,” Perales said.

Perales urged that villagers who have an opinion or some expertise on an issue contact him before he votes so he can incorporate their input into his final vote, saying he prefers talking to informed constituents over paid lobbyists.

“Come to me and talk to me if an issue’s on the horizon,” Perales said. “I’m trying to get the input to do the right thing.”

In his bid for re-election this November, Perales faces Democratic contender Dave Ogan of Clifton, a car dealership owner. In 2012, Perales, a former Greene County Commissioner, won the newly-carved district with 64 percent of the vote. In Yellow Springs, Perales only garnered 20 percent of the vote.

Constituents with an opinion on any issues can contact Perales’ Columbus office at 614-644-6020.