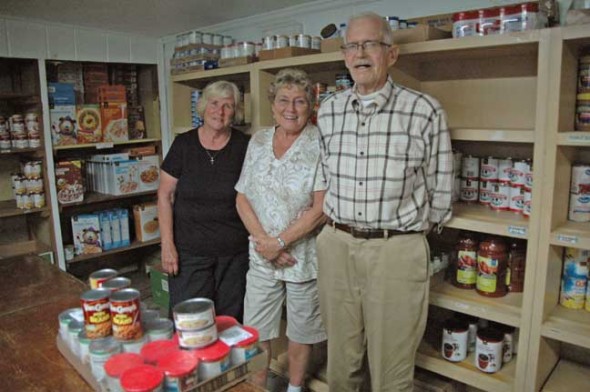 Patty McAllister, center, who has led the Yellow Springs Area Food Pantry for eight years, will step down next year, as pantry board members, including Sue Dillon and Bob Baldwin, seek to fill the gap and recruit new volunteers from the wider community. (photo by Lauren Heaton)

Armed with canned soup, dried beans, boxes of pasta and soft packages of bathroom tissue, Patty McAllister has worked for the past eight years to keep area residents fed through the Yellow Springs Area Food Pantry. Housed at the United Methodist Church on Winter Street, the local pantry has grown to serve about 115 individuals per month, the highest demand in recent history for the 80-year-old local service. So the pantry’s board of trustees is taking pains to ensure that when McAllister steps back from the helm on Jan. 1 of next year, there is a replacement team that’s as able and committed as she has been to keep the food store going.

While the pantry is located at the church and is served by many members of the Methodist congregation, the pantry board is clear that the Food Pantry is a community-wide service that ought to be managed by members of the wider community. To make the operation function smoothly, the board hopes that volunteers from all corners of the village are able to step in to help get the job done.

“It takes all of us to support the food pantry,” board member Sue Dillon said in an interview last week. “Especially if the new coordinator is someone outside the Methodist Church, that would make it real clear.”

But food isn’t the only welfare need in town. Especially in winter, local residents sometimes need help paying utility bills. And at any time of the year there are both individuals and families who suddenly find they need money for gas or a place to sleep for the night. While the Food Pantry does receive cash donations (in addition to food), as well as requests from residents for cash needs, McAllister and the pantry board members don’t feel they have the volunteer strength to handle a wider net of assistance needs. In fact, the board of McAllister, Dillon, Methodist Minister Sherri Blackwell, Bob Baldwin, Mike Arledge, Patti Purdin and Beverly Tanamachi feel overwhelmed with the increased need for food alone. Both the economy’s slow recovery and the reduced capacity of other aid and nonprofit agencies have affected demand at the pantry, Dillon said.

“Supposedly the economy is recovering, but the people who still aren’t seeing the recovery are the working poor — they still can’t quite make ends meet,” she said.

Still, even with the increased need at the pantry, Baldwin believes strongly that rolling the pantry under a local umbrella organization that could receive funding for and manage requests for all types of assistance would be more effective. That’s the way local assistance used to work when Mary Ann Bebko managed what she called the Village Emergency Welfare and Food Pantry from her home on Miami Drive. According to her husband. Bill Bebko, Mary Ann received about $500 from the Yellow Springs Community Council and another $1,000 or so from villagers annually and used it to not only stock the food pantry but help residents with whatever needs arose: utilities, rent, transportation, and occasionally a place to sleep for a night. She also collected money at Christmas to buy warm clothes and gifts for children and families.

“The beauty of it is it was all here — you didn’t have to go anywhere or ask anyone’s permission,” Bebko said in an interview last week.

Originally, the “food pantry” in Yellow Springs started as a private effort by individuals in the community who saw a local need for welfare assistance during the Depression. According to Baldwin, in the beginning it was generally known that Antioch faculty member “Doc” Adams and his wife, Sarah, operated an informal welfare assistance program out of their home on Orton Road, where the family had a sizable fruit orchard. As Antioch College students, Mary Ann and Bill Bebko knew the Adams before they decided to settle in Yellow Springs. One day, according to Bill Bebko, Sarah asked Mary Ann to come over for a visit.

“Mary Ann came home with a check book, a quart of pears and the responsibility of taking on the local welfare project,” he said.

It was a responsibility that Mary Ann felt strongly enough about to continue operating out of her home for the next 40 years, until her unexpected death in 2006.

When Mary Ann died, the welfare program was split among different groups that agreed to take on various tasks — McAllister took over the food pantry at the church, Richardson took on the Christmas Tree gifting program at the Yellow Springs Library, and Denise Swinger agreed to manage the general welfare program through a pre-existing nonprofit called Starfish (formerly a local affordable housing organization.)

While the pantry and the Christmas program have continued and even grown, the emergency welfare part has not been as active, partly because people aren’t aware that it still exists, according to Swinger’s husband, Joseph Giardullo, who helps manage the program. When Swinger took on the project, Starfish received $5,000 from the Emergency Welfare account and from 2007 to 2009, the local agency made 140 dispersements of between $50 and $800, largely for utility bills and some rental deposits and emergency shelter needs, Giardullo said in an interview last week. But since ’09 the welfare arm has received fewer and fewer requests for aid, he said, and aside from a few private donations, Starfish never received any funding. For the past several years, Starfish has responded to about 10 calls per year for help with utilities. To date, the funds are nearly depleted.

By contrast, McAllister continued to apply for and receive pantry funds from Community Council, and when that group dissolved in 2012 (due to loss of United Way funding), the pantry received a small, unsolicited portion of the remaining funds.

In addition to the three smaller welfare groups, the Village police department and the Senior Center have also served as local welfare agencies, informally dispensing donated funds to residents for utilities, medications, and warm clothing through the police Coats for Kids program. Some spiritual groups also assist community members in need. Central Chapel A.M.E. donates to the food pantry, but also responds to an average of one call per month from someone needing cash assistance or donated items such as furniture, church leader Ernestine Benning said. And while the Unitarians don’t currently have a fund specifically for local charity, according to member Mary Simms, they used to have a local emergency assistance fund as well as a partnership with the regional Interfaith Hospitality program in which each of eight member churches would open its doors to the homeless for one week about six times a year.

County agencies are of course helpful, but Schlueter feels that something is lost if Yellow Springs refers all of its local welfare responsibility to outside agencies. According to Schlueter, communities like Yellow Springs function best when residents help their fellow community members.

“I really believe that as a community, we should support each other — part of being a community is looking out for those among us who are in need,” he said.

Baldwin also feels strongly that all the local welfare programs in the village should reside under a lead agency that could at least act as a clearing house for services. It would be more efficient, he said, especially as demand for the pantry is on the rise, and villagers seem both able and willing to donate to the welfare cause.

“You won’t find a community that’s more generous and willing to help the needy than Yellow Springs,” Baldwin said.