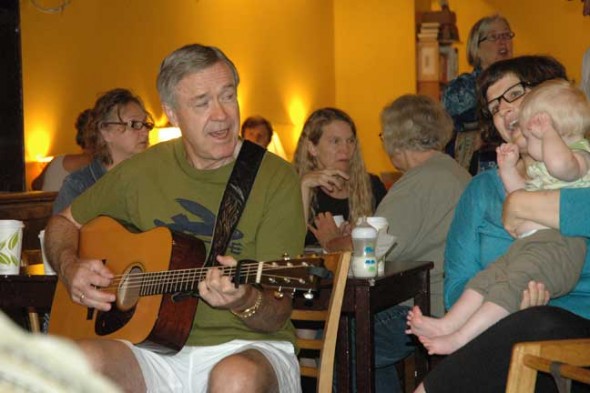 Dave Younkin of the bluegrass band Mad River Railroad took part in a recent Monday morning bluegrass jam at the Emporium. Tanya Maus, with her son August, joined in the singing. (photo by Carol Simmons)

Monday mornings at the Emporium’s Underdog Café start off slightly subdued, a little slow and sleepy as the work week begins. Locals stop in for a coffee and maybe a croissant to go, while others find a table to read a newspaper, boot up a laptop computer or linger over breakfast from the kitchen.

The energy begins to shift a bit just before 10 a.m. as first one and then another patron walks in carrying an instrument case. They head over to the front windowed area of the café and begin unpacking. The conversation is comfortable and jovial. “Just two of us this morning?” Not likely. Others will join in, in their own time. The pair push aside a table to make more room, arrange chairs in a quasi-circle that includes the Emporium’s upright piano, set up music stands and pull out a collection of song books.

They both play guitar, but Harris has a mandolin by his side as well. Soon another guitarist, Dan Austin, adds his instrument to the mix. Then comes a banjo, another guitar, a fiddle, a vocalist (and her baby for good measure) and eventually a pianist. That’s just this past Monday. The week before, nine area musicians joined the circle.

It happens every week -— a pickup jam, from 10 a.m. to noon. Whoever shows up is welcome to play, or sing — all ages, skill levels and instruments.

The musicians have been gathering at the downtown coffee shop for about nine months, says Pat Carine, of Fairborn, whose bluegrass band, Mad River Railroad, recently played live on WYSO and is scheduled to perform at the next street fair Oct. 11. Carine set up the weekly sessions at the Emporium. “I came in and asked them if I could come in and play some music.”

He said the coffee shop staff and patrons have been welcoming, and the jam has developed a small group of followers.

“It’s a friendly atmosphere,” agreed Harris after this week’s session. “The people of Yellow Springs are really receptive.”

The jam isn’t advertised; knowledge about it has spread by word-of-mouth. Carine, who also teaches young musicians, said he invites his students.

“It gives beginning players a place where they can play with other people,” he said.

The repertoire ranges from classic country, to bluegrass, to folk, to 1950s pop tunes.

This week’s session moved from the Hank Snow oldie to Tom Paxton’s “Last Thing on My Mind,” to John Anderson’s “Once a Day,” originally recorded by Connie Smith. After about 20 minutes, the energy picked up as fingers began flying through a spirited “Katy Daley.”

“We worked into that one,” Harris said with a chuckle.

Most of Monday’s players had a guitar with them, but several switched out instruments over the course of the two hours: banjo, fiddle, mandolin. Pianist Mark Delozier, of Yellow Springs, came in about the halfway mark and sat down at the old upright. Listening to the other musicians, he played by ear. The piano isn’t a traditional bluegrass instrument, but the jam accommodates anyone who wants to play. Past sessions have included a double bass, a dobro and even a flute, Carine said. “We never know what kind of music we’re going to get.”

As they play, the Emporium continues business as usual. The breakfast crowd makes way for lunchgoers. There is conversation, laughter, the sounds of cups clinking against saucers, cutlery dinging against plates, chairs scraping against the wooden floor.

The musicians end their session with a heartfelt rendition of the Stanley Brothers’ “Angel Band.” As the vocal harmonies soar, everything else seems to drop away: “Oh come angel band; Come and around me stand; Bear me away on your snow white wings; To my immortal home.”

“Like most jams, it can be three people or 30. You never know. We just have fun,” Carine said.