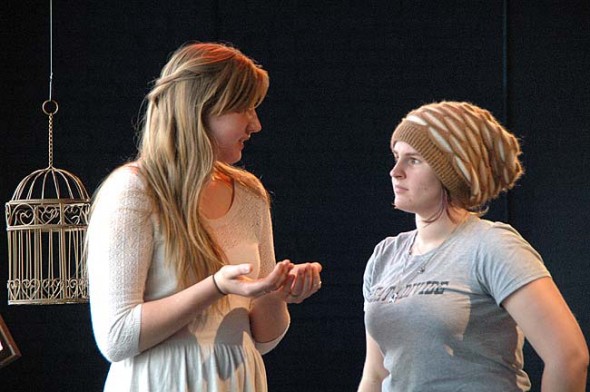 ‘Trifles’ will be the debut performance in Antioch College’s newly-renovated Foundry Theater. The one-time-only performance will commence at 7:30 p.m. in the experimental theater. The play, which was adapted for two actors, features Hannah Craig, left, and Parker Phelan. (Photo by Jenn Wheeler)

Two students in Geneva Gano’s “Introduction to Drama” literature class at Antioch College will be the first to perform in the recently renovated Foundry Theater this Thursday, Sept. 18. Hannah Craig, a first year, and Parker Phelan, a second year, will perform an adapted version of Susan Glaspell’s “Trifles,” which they have modified to work for a two-actor production.

The one-time-only performance will be held in the experimental theater in the Foundry Theater at 7:30 p.m. and is open to the public.

Much of the work on the renovation of the theater was done by Antioch alumni for the college’s alumni work projects over the past year, and the final touches were just put in place by alumni this fall. While there have already been events and classes held in the theater, this performance will be the first open performance by students in the space since the college closed in 2008.

“It’s scary to be the first student performance. We want to make a good first impression,” said Craig. “But it’s also really exciting,”

“Trifles” was written in Provincetown, Mass., in the summer of 1916 while Glaspell was working with the Provincetown Players, a performance group that produced plays written by numerous American authors, including Eugene O’Neill and other early modern playwrights. Glaspell, a Pulitzer prize-winning author, based the play on her experience as a journalist in 1900 reporting on the murder of John Hossack, who had allegedly been strangled in his sleep by his wife, Margaret Hossack.

According to Gano, assistant professor of literature at the college, the play can be understood as an early, progressive-era feminist work, both because the play is set during the women’s suffrage movement and because Glaspell was a part of a trend at the turn of the century, when women who had experience writing were able to enter the work force as journalists. The convergence of these situations offered Glaspell the chance to examine the role women played in rural and farm life in the midwest at the beginning of the century from her own perspective as a woman who had grown up in a similar town in Iowa.

The play could also, Gano said, be seen as a part of “the revolt from the village” movement in literature, a trend during the early 20th century that saw authors like Sherwood Anderson and Willa Cather turning away from the sentimental attitudes toward rural life in the Midwest that had been typical in American literature up to that point.

“These were authors who refused to romanticize or be nostalgic about farm life and instead took a realistic perspective on exposing the dark sides of rural life,” she said.

Although they are first- and second-year students, Craig and Phelan feel up to the challenge of putting on a two-person performance of such a serious play. They both have extensive experience acting and working with their community theaters back home, and they are thrilled to be able to put this experience to use at Antioch as a way to connect the in-class reading typically a part of literature classes with their own passions.

“We didn’t come into the class thinking that we’d be putting together the first play in that space by students,” said Craig. “It just sort of morphed into that.”

Craig and Phelan are both performance majors and are excited about being the first students to put on a show in the Foundry Theater since its renovation. Craig and Phelan worked with Gano, Gabrielle Civil, assistant professor of performance, and other theater staff to design a minimal set, which includes several props dangling from the ceiling, including a number of items connected to domestic life in the rural Midwest as well as two trapeze swings that suggest the interior of a birdcage. They also truncated and adapted the play, which would usually feature a cast of seven actors, to work for a cast of two, focusing on the conversations between the play’s two female characters about their friend who has been accused of murder. The performance will also make use of pre-recorded voices, and a booklet produced by the class will be distributed at the event.

“The directing has been collaborative between the three of us, with the students doing the primary stuff,” said Gano.

This is Jenn Wheeler’s last week at the News as an Antioch College co-op student.