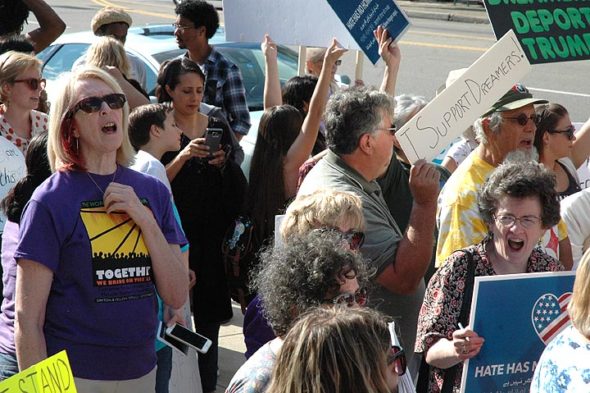 Activists are awake and watching

They’ve been dressing up in chicken suits each Monday and visiting downtown Dayton with signs suggesting that our U.S. Representative Mike Turner, whose regional office is there, might be “a chicken” for not meeting yet this year with local constituents in a town hall setting.

Turner, a Republican representing the 10th District, has been the subject of criticism by a variety of Democratic and progressive groups over the issue of his local accessibility.

But who are these faux-feathered folks clucking their displeasure?

They’re members of Greene County Indivisible: Awake and Watching, part of the nationwide Indivisible network that formed and spread across the county after the presidential inauguration of Donald Trump in January.

A loose affiliation of thousands of like-minded grass-roots groups, Indivisible’s stated objective is “to resist the Trump agenda.”

In an interview last month, she said her intention in organizing the regionally based group was to let elected officials, particularly at the state level, know of local feelings about various issues and legislative actions.

The outcome of the presidential election as well as the energy of the Women’s March on Jan. 21 galvanized her to mobilize and act so that lawmakers heard her voice and the voices of others like her, Alberter said.

She sent out emails to various friends and acquaintances and called the group Awake and Watching. “We didn’t do a lot of outreach in the beginning because we were trying to put some processes in place,” Alberter said.

Then she read an article in the New York Times about the Indivisible movement.

“I thought this is exactly what I was trying to do, on a larger scare,” she said.

“From there we created various ‘teams,’” she said. One team focused on state legislators who represent Greene County: Reps. Rick Perales and Bill Dean and Sen. Bob Hackett. Another team focused on the U.S. representation: Turner and U.S. Sens. Rob Portman and Sherrod Brown. They set up a Facebook group page and identified a person “who tweets.”

They also put together an email list, “because not everyone is active on Facebook,” Arberter said. And they send out a weekly call-to-action sheet that highlights current issues and officials whom recipients might contact. It also lists upcoming activities in which people might want to participate.

It’s important to Alberter, however, that the group not be known as a Yellow Springs effort.

“We intentionally wanted it to be countywide, and that we had representation from all of the communities,” she said.

Even more importantly, she hopes that a broader group offers connections and support for more progressive and liberal voters across the county who may feel isolated in their “red” communities.

“At the present time, we have people who are active from Bellbrook, Cedarville, Fairborn,” she noted.

Active member and Yellow Springs resident Katie Egart feels strongly that the group be recognized and identified as a countywide organization. “It’s not just Yellow Springs,” she said.

Some of the activities in which the group has taken part, in addition to the chicken initiative, have included rallies for various issues, such as health care reform, as well as a recent effort to collect bottled water to be sent to those affected by Hurricane Harvey. Another effort that took place during the recent 25-day U.S. House recess featured individuals going each recess day to Turner’s Dayton office in an attempt to meet with him. When he wasn’t available, they took a photograph of themselves with a sign indicating the day of their visit and the issue they had wished to discuss.

On Tuesday, Sept. 5, the group supported a rally that took place outside Turner’s Dayton office to protest the president’s move earlier in the day to rescind President Barack Obama’s DACA executive order. Short for Deferred Action for Childhood Arrivals, the order affects the legal immigration status of about 800,000 young people who came to the U.S. as children.

About 100 people were estimated to have participated in the action, including a large contingent from Yellow Springs.

Among those participating in the latest rally, as well as the 25 visits in 25 days project and the chicken effort, was Dorothy Smith.

Smith, who said this week that she has been involved with political activity her whole life — “peace, feminism, racial justice, the environmental movement” — felt something new after the presidential election.

“The election of Trump sent a shockwave through me like never before,” she wrote in an email. “The toxic mix of racial and ethnic fear-mongering, attacks on women, the sweeping aside of environmental protections, the dismantling of healthcare and the social safety net and the real threat of nuclear war made it important that I become more activated to first, stop this madness, and second, start to dream and build a world that will serve our communities more equitably.”

She said her membership in Indivisible “is one of the tools I use to get together with a wider community and try to hold my elected representatives accountable for the kind of world we want to build.”

For her part, Alberter said she is fairly new to political activism. She participated in a Washington, D.C., march against the Vietnam War, and she was “almost full time” in working on the Hillary Clinton presidential campaign.

She described herself before the election as having become complacent.

“Awake and watching,” she’s intent “on holding our representatives accountable, to let them know people are paying attention.”