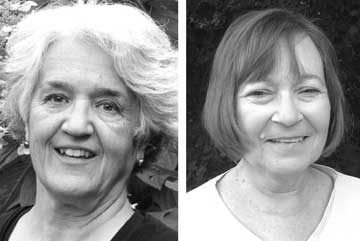 Aïda Merhemic, left, and Susan Stiles will be inducted into the Greene County Women’s Hall of Fame on Sat., Sept. 27.

Late this September two Yellow Springs women, Aïda Merhemic and Susan Stiles, will be inducted into the Greene County Women’s Hall of Fame to honor their many accomplishments and recognize the hard work they have done in support of the Yellow Springs and greater Greene County communities.

The Women’s Hall of Fame will hold a recognition luncheon for Merhemic, Stiles, and three other Greene County women on Saturday, Sept. 27 at the Walnut Grove Country Club in Beavercreek. Tickets for the recognition luncheon are available before Sept. 20 from Ann Byrd at the Greene County Women’s Hall of Fame for $15 each. She can be contacted at 937-429-1805.

Merhemic has lived in Yellow Springs since February of 1984, just over 30 years. She first came to town to finish her undergraduate degree at Antioch College through an adult completion program that offered her credit for work experience she accrued while attending Ohio State University. After completing her degree in dance, Merhemic became interested in movement therapy and wound up studying counseling. She and her husband, Bob Barcus, have run a counseling practice in town since 1986.

While she has lived in Yellow Springs, Merhemic has volunteered for a number of local organizations, several relating to local education. She served on the board of trustees of the Antioch School for seven years, from 1994 to 2001, where she first discovered her passion for education and the important role it can play in the lives of children and youth.

“The teachers there really sparked and awakened my interest in education,” she said.

She has served on the Yellow Springs Board of Education since 2006 and is currently president of the board. Throughout her tenure on school board, Yellow Springs has faced a variety of challenges, including a number of personnel changes and difficult budget decisions in the wake of state funding cuts. She said she’s particularly proud of the work she and the board did in selecting the current administration of the high school as well as their contribution to the transition toward project-based learning.
“I feel hopeful that we’ll see that it’s very beneficial to our students, and I hope to our teachers, too,” said Merhemic.

Merhemic said that after her involvement in the women’s movement during the 1970s she feels particularly honored to be a part of the Women’s Hall of Fame with other women in Greene County who have done such important work both during and since that time.
During the 38 years Stiles has lived in the area, she has been deeply involved with several organizations working to ensure the availability of affordable housing in Greene County. She worked for the Greene Metropolitan Housing Authority for well over 20 years, serving as director for 17 of those. The GMHA is a non-profit organization that works in Greene County to provide affordable, public housing and helps eligible low and moderate income residents pay their rent. While she worked for the GMHA, Stiles helped to increase rent subsidies for local families, increased the number of public housing options available, and established the Greene County Housing Coalition to help numerous local housing organizations collaborate more efficiently.

Stiles is also being honored for her work with the Family Violence Prevention Center of Greene County. She helped to found the organization in 1979 in Yellow Springs, where it first operated in an apartment and then moved to a small house.

“When I started the Family Violence Prevention Center, I would say that violence against women was somewhat accepted by our society,” said Stiles. “I did a lot of advocating and education and just really brought attention to the community that violence was unacceptable.”

She feels that work paid off, that people are much less tolerant of domestic violence and much more aware of the strong connections between violence in the home and violence in the streets.
The Family Violence Prevention Center is now located in Xenia and offers safe housing, counseling, and many other services for victims of domestic violence and their children, as well as violence prevention classes at local schools and other educational outreach programs in the Greene County area.

Stiles also serves as the president of the board of directors of Yellow Springs Home, Inc. She feels that her work with that organization currently is particularly important given the ways that Yellow Springs has changed over the past few decades.
“We need to preserve affordable housing in Yellow Springs,” she said.

Not only does Stiles still volunteer for Home, Inc. despite being retired, she is also a second-year master gardener and said she’s especially passionate about dogs. She has been training her English springer spaniel in tracking and rescue and they participate in agility competitions.

Every fall the Women’s Hall of Fame recognizes several women who either were born in Greene County or have lived here for over 10 years and have done significant work for their communities that has had countywide effects. Women may be nominated for the hall of fame for their outstanding professional careers, volunteer activities, and any other exceptional work that has has an impact on Greene County.