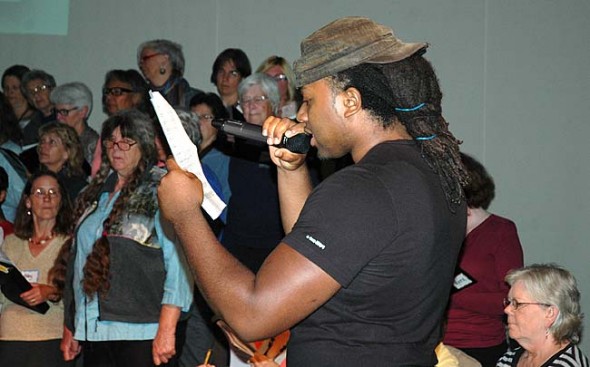 Issa Walker, of the Yellow Springs-based hip-hop group Village Fam, rehearses with the World House Choir, under the direction of Catherine Roma, on a song that will be performed as part of Friday night’s Pep Rally for Marriage Equality, hosted by the choir, at the Antioch Foundry Theater. The collaborative piece composed specially for the all-volunteer choir combines rap and four-part harmonies. Friday night’s multimedia event, scheduled to begin at 7:40 p.m., will include music, dance and a variety of visual elements. In addition to members of Village Fam, guest performers will include MUSE, Cincinnati’s Women’s Choir; and dancers Melissa Heston and Rodney Veal. Admission is free. (Photo by Carol Simmons)

Marriage equality is becoming a reality for a growing number of people in the United States. With the Supreme Court’s refusal this week to consider appeals from five states trying to deny marriage rights to same-sex couples, 30 states have enacted or are in the process of enacting equal protections for gay and lesbian unions.

Ohio is not one of them.

The legal differences in Ohio are cause for distress, dismay and even anger, says Catherine Roma, founder and artistic director of the locally based World House Choir. But the 80-some-voice all-volunteer group is working to meet the challenges of this time with hope, humor and love.

Toward that end, the choir is hosting a Pep Rally for Marriage Equality on Friday, Oct. 10, intentionally set on the eve of National Coming Out Day.

The multimedia event will feature musical performance, of course, as well as dance, speakers and a variety of visual elements. Joining in on the festivities will be the critically acclaimed MUSE, Cincinnati’s Women’s Choir, as well as members of Yellow Springs’ own hip-hop group Village Fam and dancers and choreographers Melissa Heston, of Yellow Springs, and Rodney Veal, of Dayton.

It is meant to be a fun and joyous event, Roma says. “We will celebrate our interconnectedness.”

Alto singer Janice Gairy, of Xenia, says the choir’s community building approach to social justice issues is part of the reason she joined last spring, not long after returning with her husband to their native Ohio to care for ailing parents. She believes marriage equality is an important justice issue. “I just feel as though everyone is entitled to be happy and marry anyone they want to marry. I feel as though, being a black woman, there should be no discrimination.”

The choir, she says, offers a source of healing, both personally since her mother’s recent death, and for our society. “It’s all connected.”

Another alto, Maggie Morrison, a longtime village resident in a family of color, also speaks of the choir in terms of personal and societal healing. The choir’s “wings of love and joy” have carried her through some difficult times this past year, she says. At the same time, it has given her “a way I can use my voice to make a difference in the world and make a difference in the things I believe in.”

A significant part of the joy for soprano Erica McKinney, who commutes to weekly choir practice from the Belmont neighborhood of Dayton, involves family. Childcare on site allows her to keep her 2-year-old son, Eric, close at hand while she fulfills her own childhood dream to sing in a choir with her grandmother, Donna Trammell. “I used to watch my grandmother sing with MUSE, and I said I want to do that.”

Other family sets are part of the choir as well — mothers and daughters, married couples, partners. The title of Friday’s pep rally is “Love Makes a Family,” and the evening will open with a slide show of pictures representing the families of choir and community members. Several speakers will share stories and information about how the inequality of Ohio’s marriage laws affects families.

One of the choir’s youngest members, 15-year-old Lyric McDonald, says she welcomes the focus on family, citing gender identity and sexual orientation diversity among loved ones. “My family basically speaks the marriage equality struggle.” She says being part of World House Choir’s efforts gives her “a sense of community” that she cherishes.

Hannah DeLamatre, of Yellow Springs, says World House Choir “offers a unified voice across generations at a time it needs to be seen and heard that this isn’t about just one section of people, one color of people, one class of people. This is what human beings need to be doing.”

What’s more, “when you bring song into a social movement, it fills the place with positivity, so that there is no longer room for anything else. It is transformative.”

Friday’s Pep Rally for Marriage Equality is scheduled to begin at 7:40 p.m. at Antioch College’s Foundry Theater, following activities at the college kicking off the new academic year there. Admission is free.