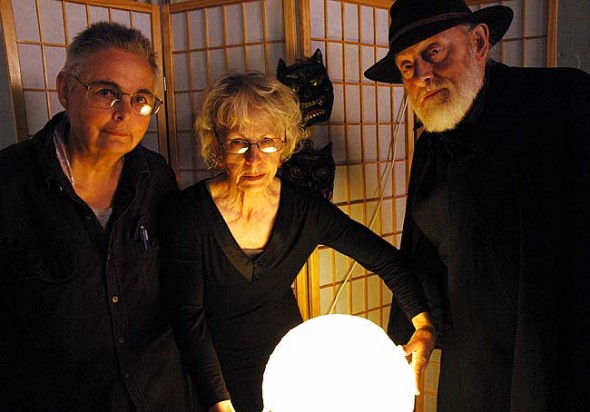 Harold and Jonatha Wright wrote and Sherraid Scott illustrated ‘Flesh Crawling Tales from Old Japan,’ published this month in time for Halloween. The authors will host a signing on Sunday, Oct. 19, 3–5 p.m. at the Arts Council Gallery on Corry Street, where Scott will also do a printmaking demonstration. (Photo by Lauren Heaton)

Wrights raise the haunts of Kyoto

“Mukashi mukashi,” goes the Japanese for “once upon a time,” in a river valley where the Miami Indians once settled, there lived two storytellers named Jonatha and Harold Wright. Normally the pair told happy stories and made children laugh. But once a year, near the time of the autumn equinox, they put on black clothes, and began to tell gruesome stories that drew people in, curdled their blood, and chilled them to the bone.

One fall, 2014, to be precise, they published these stories in a book called “Flesh Crawling Tales of Old Japan.” But they didn’t stop at mere words. They had an artist from their hollow called Sherraid Scott illustrate the gory details of the faceless woman who haunted the noodle stand and the monks who were eaten down to the bone by giant rats. And on Sunday, Oct. 19, at 3 p.m. they slithered down to the Yellow Springs Arts Council Gallery on Corry Street to scrawl their names on these books for any who dared to buy and read them. And for the little children, the artist unveiled her sharp blades and demonstrated how to carve these horrible scenes onto a block of wood to be printed into the ghoulish book.

The stories weren’t just any old yarns. They were collected from ancient mountains and temples in Japan, where historic events of war and political intrigue became lore. In the eighth century on the Modori-bashi bridge in Kyoto, for example, a son was said to have seen his father passing into the afterlife. In the intervening centuries, many others died in battle and execution on the bridge, and their ghosts were said to haunt the place ever after. The Imperial Palace in Kyoto was also the site of many fights between the Emperor’s modernist supporters and the samurai of the old world. The ghosts of those who died there are said to haunt the city as well.

The Wrights came by their storytelling as an occupational hazard. As a professor of Japanese at Antioch College in the 1990s, Harold Wright had established an exchange program with sister college Kyoto Seika University. Half the year their students came to Antioch to study English, and the other half of the year Antioch students went to Kyoto to study Japanese. On such visits, the Wrights would take their students on historic tours of Kyoto, where they discovered many ghost stories about different places in the city. The tours became an academic tradition, and after Wright retired in 2006, he and Jonatha published the first set of these stories in a collection called “Spine Tingling Tales of Old Japan,” printed by Lulu Press. “Flesh Crawling Tales” is the second volume of these stories translated into English by Wright, who has published many volumes of Japanese poetry translations, as well as co-authored several books with Jonatha, including a handbook on the art of storytelling.

As ghost stories go, Japanese stories don’t differ that much from American ones, except that instead of cornfields and suspenders, the context is rice paddies and kimonos. The story about the geta (shoe) ghost, for instance, concerns a spoiled child who grows tired of her geta and discards them for a new pair. To get revenge, the two wooden spikes on the soles of the geta become teeth and try to bite her every night until she agrees to start taking better care of her shoes.

The Japanese also have iconic ghosts, such as the faceless woman, the pig, and Tesso the rat priest who trolled the pits of hell to recruit demons for his revenge against the Buddhist monks on Mt. Hiei. And Hoichi the earless, too, is the blind priest whose ears were stripped from his head when, deep in meditation, he failed to hear the spirits of the dead Heike samurai calling to him.

Scott included in the book a woodblock print of evil-eyed Tesso and his cronies, as well as one of Hoichi, when he still had his ears. And her cover print depicts a beautiful woman on a moonlit night with an “oni” monster oozing out from the back of her head.

Those who attend Sunday’s signing and demonstration event are cautioned to polish their shoes, cover their ears and watch out for man-sized rodents.