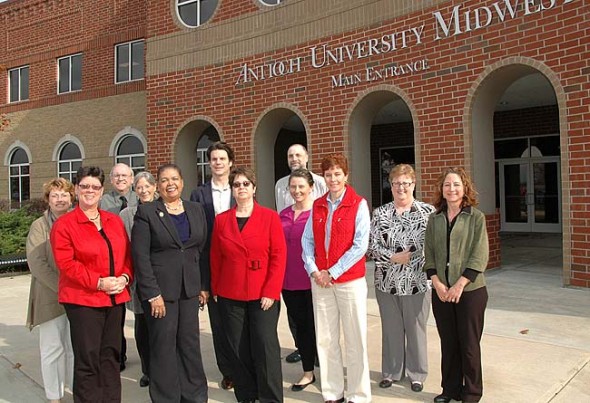 The hallways at Antioch University Midwest rumbled with the sounds of moving furniture, artwork and people this week as the 40 Antioch University administrators formerly located across the street moved into the Midwest building. The university will reach the end of its three-year lease at the former Creative Memories building this month and is making the move University Chancellor Felice Nudelman said it has intended to make since the new building opened in 2007 as the anchor of the town’s business park, the Center for Business and Education.

Prior to the move, the Midwest building already housed 47 administrative and faculty offices for its own undergraduate and graduate studies programs, Antioch Education Abroad, the university’s Ph.D. in Leadership and Change program, as well as a few offices for AU Connected, the university’s online program. But even with those programs under one roof, the 94,000-square-foot building still had a significant amount of vacant space. Built with what former Midwest (then McGregor) President Barbara Gelman-Danley said at the time was “room to grow,” the school has instead lost students since then, going from about 700 in 2007 to 350 last year. And the university still has about eight years until the original $12 million performance bond from the Ohio Higher Education Facilities Commission is paid.

So with ample space, the building absorbed AEA and the Ph.D. programs in 2011. But in an interview with the YS News that year, former University Chancellor Toni Murdock hinted that the university was considering relocating its headquarters to a more convenient location between its five campuses in Seattle, Santa Barbara, L.A., Keen, N.H. (New England), and Yellow Springs (Midwest). And with WYSO set to move into what was then university headquarters at the Sontag-Fels building on East Center College Street, the university signed a three-year lease for raw office space at the Creative Memories building.

Now, not only are university offices moving again, Midwest offices are shifting over to make room for them. Midwest offices, including that of President Karen Schuster Webb, are now located on the first floor in the western wing, next to AEA and the Ph.D. program. University offices, including the chancellor, general counsel, the CFO and the vice chancellor of academic affairs, are located upstairs in the eastern wing, near the university library and a small gym and shower room, which are open to both students and staff.

Even with the offices mostly filled, the building still has about 2,000 square feet of space that is yet unfinished. Nudelman said this week that the university will likely use that space to expand programs that Midwest is currently developing.

The space could also be used to incubate innovative education programs such as the geographic information systems laboratory started by a graduate student at AU New England with grant support from board member Bruce Bedford. Labs could be established at each campus to help students gain skills in digital mapping, spatial analysis, and remote sensing, an AUNE press release from 2013 indicated. And because the building was originally built as the anchor for the 30-acre business park, the university is also open to collaborating with a business-type incubator program as well.

“It’s a good idea to bring in more entrepreneurship to Yellow Springs, as long as it’s a good fit,” Nudelman said.

This year the university has also added about a dozen new positions to help boost enrollment at all campuses. A new vice-chancellor of institutional advancement will now oversee a director of advancement and a marketing manager at each of the campuses. In addition, Midwest will soon get a new director of enrollment management and a student recruiter.

Ultimately, the integration of Midwest with the university enables the two entities to share resources and facilitates collaboration not only here but throughout the university system, both Nudelman and Webb said. And according to Nudelman, the move to Midwest was not a money-saving effort and she declined to give the amount that AU will save in rent from the move.

“One of our new endeavors is to look at being one university with five locations and online, instead of being separate entities,” Webb said.

In a building that boasts a 247-seat auditorium, a multipurpose gathering space, 23 classrooms and breakout rooms with digital capacity and a parking lot with 302 spaces, sharing makes sense to everyone.

“We own this building — it just doesn’t make sense not to work together,” Nudelman said. “We’re all good being together.”