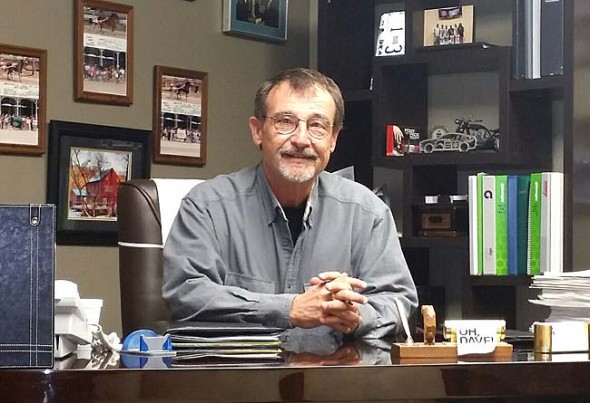 A Clifton Democrat running for state representative is out to fight “the powers that be” in the Ohio State House who are, he says, too responsive to powerful lobbies at the expense of the needs of local communities.

To Ogan, Perales is one of those powers — Republican lawmakers with majorities in the Ohio Senate and House — who have pushed through legislation that has defunded municipalities and townships, supported charter schools and frozen renewable energy standards.

“Between the rainy day fund and Jobs Ohio, there is a lot of money the state is controlling at the expense of local governments,” Ogan said.

In the 2012 election, Perales won the race with 65 percent of the vote, defeating Democratic contender Bill Connor, who received 35 percent of the district’s vote. Previously, Perales was a Greene County commissioner and the mayor of Beavercreek.

Ogan said this week that while he hopes to win, he knows his self-funded campaign faces an uphill battle because the district leans heavily Republican. After the latest round of redistricting in 2012, 97 of 99 Ohio house districts are safely either Republican or Democrat — District 73 is considered a “safe” Republican district, according to the Ohio League of Women Voters. Statewide, while 51 percent of votes cast were for Democratic Party candidates in 2012, 60 percent of seats went to Republicans.

As a result, Ogan hopes a strong showing in the election would “put pressure on the powers that be to help their chosen one to do more for the area,” he said. “Otherwise they don’t have a motivation to listen to their safe guy.”

Ogan, 64, has been in politics for decades but has never run for state office. He served as the Fayette County Democratic Party chairman, worked on a bipartisan commission to charter Washington Court House and is currently on the Clifton Planning Commission. He owns and operates the family’s Ford dealership, Carroll Halliday, which was founded in 1932. Ogan was born and raised in Washington Court House and moved to Clifton in 2010.

Ogan was a self-described “hippie hell-raiser” at Miami University, graduating in 1974. During that period he visited Yellow Springs often, demonstrated against the Vietnam War and explored radical political ideologies as a political science major studying political administration. After receiving a law degree from Salmon P. Chase School of Law at Northern Kentucky University and working in the private sector as an auto dealer, Ogan then started participating in party politics and elections.

Ogan was tapped to run for the Ohio House by the Ohio Democratic Party, which asked him to be a placeholder candidate until they could find someone else to run. When the party didn’t, Ogan agreed to self-finance his campaign — he is getting no financial help from the state Democratic Party. The Greene County Democratic Party, “a dedicated band of folks,” has given him some campaign support, but mostly he is trying to run a “very efficient campaign in terms of the per vote cost,” he said.

“I’m all about efficiency,” Ogan said, which he learned is critical in the private sector. “I describe myself as a conscientious capitalist,” he went on. “Governments are not good at allocating resources, but they do have a definite role, which gets to ‘Tax what you don’t want, incentivize what you do.’”

Ogan additionally believes Ohio House representatives are paid too much for their part-time job — $60,000 per year before benefits.

“Mr. Perales has served his community, but he’s been paid well to do it,” Ogan said. “I would do the job for a lot less.”

Ogan was reluctant to speak ill of his opponent or his votes over the last two years, however, since “Dimming someone else’s candle doesn’t make yours brighter.”

But Ogan did make one exception. He singled out Perales’ vote to pass Senate Bill 310, which froze state renewable energy standards for utilities for two years while they were re-assessed, as mistaken.

“The long term payoff of energy security, rate hike stability and environmental health make sense for future generations,” Ogan said of renewable energy. “I think the utilities should have to meet the standard and kicking the can down the road is short-term thinking.”