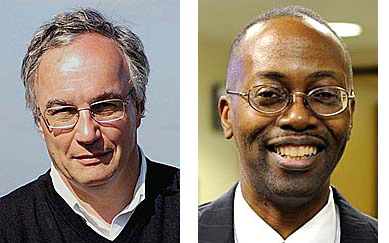 Keith Doubt and Kevin McGruder will read from original work this Saturday, Nov. 15, at 2 p.m. at Blue Jacket Books.

In the mid-1990s, Keith Doubt, then living and teaching in Missouri, became increasingly troubled by the war between Bosnians and Serbians. The New York Times was always a day or two late in the rural area where he lived, but regardless, he remembers being consumed by the paper’s coverage of the conflict.

“I got emotionally caught up in it,” he said in a recent interview.
A sociologist, Doubt especially wondered how to use the tools of his training to understand the extreme violence and societal upheaval of that war. He organized conferences, began studying the language and eventually traveled more than 25 times to the area, including a stint in 2000 as a Fulbright Scholar. Currently a professor of sociology at Wittenberg and a 15-year resident of Yellow Springs, Doubt published two books on the war, “Understanding Evil: Lessons from Bosnia” and “Sociology after Bosnia and Kosovo.”

However, in recent years Doubt has turned his attention away from understanding the horrors of the Bosnian conflict and toward something far more positive: how the Bosnian people have found a way to move on.
“I wanted to write about the resilience of the society,” he said.
Doubt will read from his new book, “Through the Window: Kinship and Elopement in Bosnia-Herzegovina,” this Saturday, Nov. 15, from 2 to 4 p.m. at Blue Jacket Books at 30 S. Detroit Street in Xenia. He will be sharing the stage with his Omar Circle neighbor, Kevin McGruder, assistant professor of history at Antioch College.

McGruder will read from his book “Witness: 200 Years of African-American Faith and Practice at the Abyssinian Baptist Church in Harlem,” which was written in honor of the church’s bicentennial. McGruder was one of four authors of the book, along with Genna McNeil, Houston Roberson and Quinton Dixie.

The book on the Abyssinian Church is also about the resiliance of a society, although in this case the society of African-Americans in Harlem, New York City. The historic strength of black churches can be linked to their importance as places to congregate for African Americans, when such places were limited.

“Black churches served not only as a religious space but as a community space, when people couldn’t gather in other places in the broader society,” McGruder said.

One of the oldest, if not the oldest, black churches in the country, the Abyssinian Baptist Church gained fame as the pastoral home of Rev. Adam Clayton Powell Jr., the longtime Congressman from Harlem. McGruder’s interest in the church began in the 1980s when, as a resident of Harlem, he was casting about for a church home, and especially sought one that took an active role in its neighborhood. At Abyssinian, he found a church deeply embedded in the community, with efforts to provide housing along with social services. He’s been a member since the late 1980s, and still sings in the church choir when he goes back to Harlem.

At Saturday’s reading McGruder will read from a historic letter discovered during research for the book. The letter is from the original 15 founders of the Abyssinian Church, (11 of whom were women) who wanted permission in 1807 to break away from the historic church, which was mainly white. The request to form their own church probably came from the founders’ frustration with the segregated religious practices of the time, which might have included having to sit in the back of the church during worship, McGruder said. However, the small group had to be mindful to not upset the church leaders with their request, so that they could benefit from the original church’s affiliations.

Still, the historic letter was a surprise to the authors.

“It shifted the way we talk about the founding period,” McGruder said.
Doubt will read from the section of his book that describes the Bosnian custom of elopement, which is chosen by about 20 percent of its citizens as their path to marriage. While the society is patriarchal, elopement is a way that women empower themselves by making their own decisions, Doubt discovered in his interviews with Bosnian women. And they most often receive help from other women in the process.

“Eloping takes some courage,” he said.

All in all, Doubt wants to shine a light on what he sees as the strengths of Bosnian society. The people are open, gracious, welcoming to strangers and also very funny, he said, especially delighting in irony.

Most people only know the society by the horrors inflicted within it, Doubt believes, and he’d like to change that.

“I’m trying to claim what’s special about Bosnia,” he said.

McGruder’s book, “Witness: 200 Years of African-American Faith and Practice at the Abyssinian Baptist Church in Harlem,” will be available soon at Sam & Eddie’s. “Through the Window, Kinship and Elopement in Bosnia-Herzegovina,” published by the Central European University Press, is available on Amazon.com, with a Kindle version available.