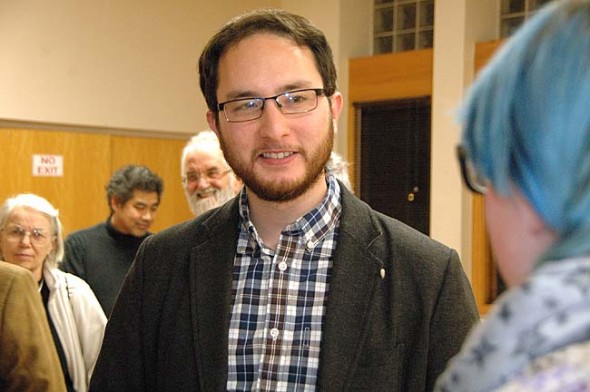 Village Council is scheduled to approve a contract with John Yung on Monday. (Photo by Lauren Heaton)

On Thursday about 25 people attended a meet and greet at the Bryan Center for the two finalists for the position of assistant Village manager. Though Village Manager Patti Bates could not confirm the decision by press time on Wednesday, Village Council’s agenda for Monday, Dec. 1, includes the approval of a contract for John Yung as assistant manager. Yung, the zoning administrator for the City of Bellevue, Ky., and Anthony Foster, director of the department of metropolitan development of Richmond, Ind., were the two finalists for the position.

The full-time position, advertised at a compensation between $55,000 and $70,000, has not been filled since Jo Scott resigned from the post in 2000 under then-Manager David Heckler.

John Yung, 31, has since 2006 been the zoning administrator for Bellevue, an historic town of 6,000 just east of Newport. He holds a master’s in community planning from University of Cincinnati and has also been a contributing editor on urban planning for UrbanCincy.com, an online magazine, since 2011.

In Bellevue, Yung works closely with the economic development director communicating with developers and fitting projects into the city’s form-based zoning code, one based on the aesthetic and function of collective public land use rather than the traditional “micromanagement and segregation of land uses,” according to the Form Based Codes Institute.

Recently Yung has worked to help retrofit a pre-existing, run-down shopping plaza into the new code by bringing back elements of the city’s historic character to the plaza to attract new development. The city had done the same thing with Main Street, and it was already attracting 50 percent more revenue than the plaza, Yung told the group of people gathered around him asking questions at the Bryan Center.

“The manager of the plaza is the same guy who built it in 1964, and we realized that by renovating it and then hiring a real estate agent to advertise it, we could be sitting on a boatload of development opportunities,” he said.

The project fit with his ideas of the kind of focus Yung believes small towns should take to “build a more fiscally sustainable city” in the face of local government funding cuts and an unstable boom/bust economy. He cited Strong Towns, an organization with a blog devoted to coaching small towns and cities for financial and cultural resiliency, as a group with good ideas to be applied in towns such as Bellevue and Yellow Springs. With the right design and investment, smaller spaces with diverse streetscapes can generate a lot more economic activity than a Walmart, he said.

“Yellow Springs already has that,” he said. “It’s about highlighting the natural assets of the community — its walkability, green spaces …”
Biking was a big topic of conversation, as Yung bikes to work daily from his home in Over-the-Rhine, a nationally recognized historic district in Cincinnati that he has participated in helping to rebuild after decades of urban blight. Those asking questions voiced interest in the bike share he belongs to, and in his ideas on how to make such a system more widely affordable. That conversation slipped into one about affordability in general, which Yung believes could be addressed at least in part by allowing, and more, encouraging, the building of tiny homes to provide an option for older people to downsize, reduce overall housing demand and reduce housing prices in general. His own neighborhood has grown so popular recently that affordability has become an obstacle there as well.

“The condos in Over-the-Rhine have gotten so expensive that I’m being priced out — and I helped create it!” Yung said.

Having grown up in Lebanon, if he got the job in Yellow Springs, Yung said he would certainly move to the area, where he has friends and would enjoy the diverse and bikable community.

Anthony Foster, 40, had a somewhat different experience in Richmond, Ind., a rural city of 36,000 and home to Earlham College and three other college campuses. Richmond has tried to create the kind of redevelopment that Yellow Springs has made by investing in the arts and creating an environment that will attract the “next generation of workers.” As the city’s grants administrator, Foster helped secure $10 million to $12 million in state funds to improve Richmond’s downtown streetscapes, parks systems and digital connectivity the city felt was necessary to accommodate an increasing number of telecommuters and home-based businesses.

Foster also managed the rewrite, with the use of a consultant, of Richmond’s zoning code, and worked closely with the city’s economic development department.

If he were offered the job in Yellow Springs, Foster, whose wife teaches public school in Richmond, said last week that he would likely commute the hour distance to work.

The assistant manager was needed to coordinate Yellow Springs’ planning and zoning structures and to provide staff support to Village Planning Commission and the Board of Zoning Appeals and to administer the Village zoning and regulatory codes. The Village has operated for over 15 years with just a manager, sometimes with a Village planner and/or a planning assistant and economic development director. Under former Village Manager Mark Cundiff, Village Council had approved the addition of an assistant manager for needed administrative support, but the Village was unable to fill the position before Cundiff left for a job in Sidney. Currently, the Village has just a Village manager and a part-time zoning administrator through Greene County.

Though the contract has not been finalized, Bates said last week that the job would begin as soon as the candidate is available.