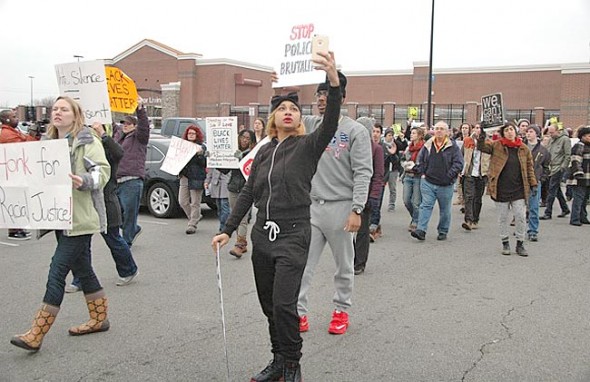 Several hundred people, including many villagers such as Jeanna Breza, at left, attended a protest at Walmart this afternoon to protest the August police shooting of John Crawford at the store. Two people were arrested, including Sandy King of Yellow Springs. (Photo by Diane Chiddister)

Read the article on the Walmart protest here.

About 200  people, including a large percentage from Yellow Springs, descended on the Beavercreek Walmart at 3 p.m. this afternoon in protest of the August police shooting of an unarmed young black man, John Crawford.

Sandy King of Yellow Springs and Elias Kelley were two of the four people arrested by police.

The group, which was diverse in age, race and gender, congregated in the store’s pet department, where Crawford had been shot and killed by police while holding an air rifle. The group’s intention was to stage a “die-in,” as has been held in many cities across the country to protest recent police shootings of  black males. However, Walmart leaders and police immediately told group members to leave. When the protestors did not leave, the store was evacuated until the only people inside were the protestors, who continued to refuse to leave. A small group did lie on the floor for the “die-in” for several minutes while others sang and chanted until they were told they’d be arrested if they didn’t leave. At that point, group leaders, including Bomani Moyenda of Yellow Springs, advised the protestors to exit the store.

About five police cars waited outside, and protestors were again told to leave and again refused.

Additional police arrived, from Xenia, Greene County Sheriff’s and Wright State University, until more than 20 police cars were in front of Walmart. At that point, protest leaders advised group members to disperse, and the event was over.

Award-winning filmmakers Steve Bognar and Julia Reichert have released a video of the event:

One Response to “VIDEO: Hundreds protest police shooting at Walmart”