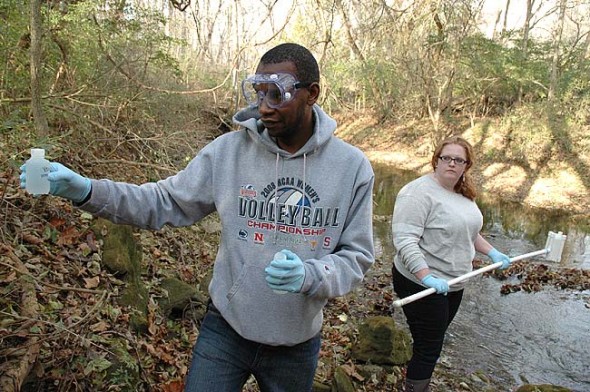 Last month, Wright State University students James Waweru, left, and Sarah Steele tested the water quality of Yellow Springs Creek near the Grinnell Road covered bridge. The Advanced Environmental Chemistry class tested 10 sites in and around Glen Helen Nature Preserve and found high levels of nitrates and E. coli in some springs and surface water and a private well. They will share their results at 3 p.m. Wednesday, Dec. 10, at the Vernet Ecological Center. (Photo by Megan Bachman)

High levels of nitrates and E. coli were found in several area springs, surface waters and a private well during a study of water quality in and around Glen Helen Nature Preserve this fall.
Students in Wright State University professor Audrey McGowin’s Advanced Environmental Chemistry course found that nitrate levels were at or well above federal drinking water limits of 10 parts-per-million in Birch Creek and in a private well, while two springs contained 100 and 300 colony-forming-units (per mL) of E. coli, a microorganism for which there is no safe amount.
Students will share the results of their research at a public presentation at 3 p.m., Wednesday, Dec. 10, in the Vernet Ecological Center at Glen Helen.

The presentation is for those interested in local water issues or concerned with preserving Glen Helen, according to McGowin, an environmental chemist who has done water testing with students in the nature preserve for 20 years and seriously for the last four years.
“My main interest is in protecting Glen Helen,” said McGowin, who lives in Fairborn.
This year students tested for E. coli, numerous trace metals and anions like nitrate and phosphate, among other parameters. The students, who are senior undergraduates or master’s
level students, follow U.S. Environmental Protection Agency methods and good scientific practices so that the data is defensible, McGowin said. A total of 10 sites in and around the Glen were tested this fall.

Overall, the tests showed that nitrate levels were higher in the south Glen, and especially high in a private well in the Jacoby Road area, McGowin said. Nitrate runs off of area farm fields from fertilizer and can also come from human and animal waste, McGowin said, while high levels can interfere with the blood’s ability to transport oxygen in the blood causing anoxia.
McGowin recommended that those who live in the Jacoby Road and Clifton Road area should get their wells tested. Especially concerning to McGowin is that nitrate levels remained high throughout the fall, when they should have declined. Students tested water in both September and November.

Meanwhile, high levels of E. coli were found in a spring along Grinnell Road known as the Dairy Spring (100 CFUs) and a spring in Glen Helen near Yellow Springs Creek called the Traveler’s Spring (300 CFUs). E. coli was not detected in the Yellow Spring, however.

E. coli is a microorganism that comes from human and animal feces and can cause diarrhea, abdominal cramping and vomiting, according to McGowin. Because no amount of E. coli in drinking water is considered safe, people should not drink from springs or streams in the Glen, swim in its waters or allow their pets in waterways, she said.

The class also reported to the local Ohio EPA authorities when they discovered that there was no discharge coming from a Morris Bean & Company effluent area, which the EPA later confirmed was due to the formation of a new sinkhole on the property, according to McGowin.

A poster will soon be available online with the full results from the local water quality tests which McGowin’s class conducted. A link will be available at ysnews.com when the results are available.