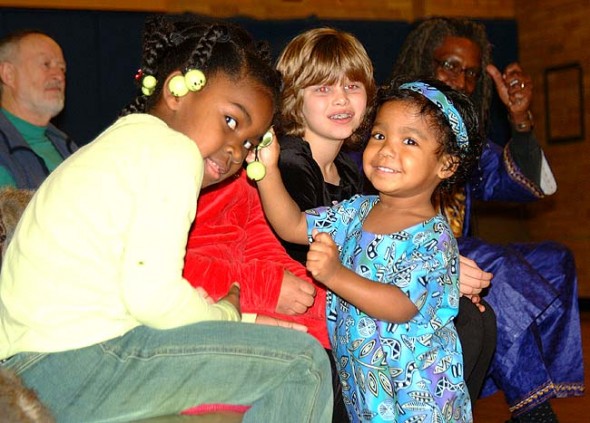 The annual village Kwanzaa celebration is being revived this year after a two-year hiatus. The event takes place Saturday, Dec. 27, from 4:30 to 7:30 at the Bryan Center. Shown above are Gordon Champman, left, Malaya Booth, bottom right, and John Booth, behind, at a past event. (Submitted photo)

Those concerned for the rights of African-Americans have been agitating this year in cities across the country, and local resident Basim Blunt is proud to be part of a Yellow Springs community that has helped bring attention to the regional issue. But he doesn’t want all the attention on African Americans to be about struggle and sadness, especially when there is so much good to share from the African and African-American traditions. That’s partly why he wanted to make sure that the Kwanzaa celebration that the African American Cross-Cultural Works has sponsored in the village for nearly 10 years continues.

“There’s a great African-American tradition that is celebratory,” he said. “So take a break from the protest line and come eat and have some fun.”

After a two-year pause, the annual village Kwanzaa celebration is back on Saturday, Dec. 27, 4:30–7:30 p.m., at the Bryan Center. The event is a potluck “harabe” feast like the one celebrated on New Year’s Day, according to the Kwanzaa tradition. Paper plates and cups will be provided, and participants are encouraged to bring the rest of the meal to share.

With local resident Bomani Moyenda as the master of ceremonies, the event will open according to Kwanzaa tradition, by asking the eldest in attendance for a blessing to begin. Long-time Kwanzaa coordinator Faith Patterson will be honored for her many years of service to the community, and then young people will be asked to light candles for the Nguzo Saba, or seven principles of Kwanzaa. A libation will be given for the African-Americans who died this year, including poet Maya Angelou and actress Ruby Dee, as well as members of the local community.

The event will also feature African drumming from the Booth Family Drummers; Darren Gilley and Jason McClean; poetry; and for children in attendance, simple arts and crafts and the animated film “Tell Me Who I Am” about the African-American ancestors who were kings of Egypt. Artists, dancers and musicians are all welcome to this family celebration of African-American culture.

Kwanzaa, or “first fruits” in Swahili, was created by African philosophy scholar Maulana Karenga in the 1960s as a harvest festival celebrated from ancient to modern times throughout the African continent. The goal was to “reinforce seven basic values of African culture which contribute to building and reinforcing family, community and culture among African American people as well as Africans throughout the world African community,” according to the official Kwanzaa website. These Seven Principles of Umoja (Unity), Kujichagulia (Self-Determination), Ujima (Collective Work and Responsibility), Ujamaa (Cooperative Economics), Nia (Purpose), Kuumba (Creativity) and Imani (Faith) are standards of excellence to be used to build moral community and develop positive and productive culture.

Raised Christian Baptist in New Jersey, Blunt has celebrated Kwanzaa with his family for about 20 years in the Columbus, Dayton and Yellow Springs communities. His family has always been conscious of honoring their African-American identity, and when they learned about Kwanzaa, it seemed a positive and personal addition to the commercial Christmas holiday.

John Booth has also been celebrating Kwanzaa for about 20 years, beginning in Minnesota where he worked as a behavioral counselor in the public schools, and more recently in Yellow Springs with his children. Each day they light a candle for a principle and discuss its meaning. And they do the libation with the unity cup to guard the uttered life of their ancestors, which is the life after the one on Earth and the one before the life of the unknown. Booth has learned to take the tradition seriously.

“At first it was seven days of partying,” he said jokingly. “Then I started learning the tradition, that it was the first African-American holiday before Martin Luther King Day, and it was all about making yourself and your community better, and I said, I can deal with that.”

Both the Blunts and the Booths do Christmas too, and Kwanzaa, celebrated Dec. 26–Jan. 1, has become an essential addition to the annual tradition. To mark it this year, the Booth Family Drummers will perform an arrangement of Ghanaian Afro-pop band Osibisa’s “Beautiful Seven,” as well as a tribute to James Brown and whatever else music director Malik, 9, selects for the day.

This year’s organizers would like to thank the 365 Project, Moyenda, Beth Bridgeman and others who have helped to keep “Faith’s Kwanzaa” alive.