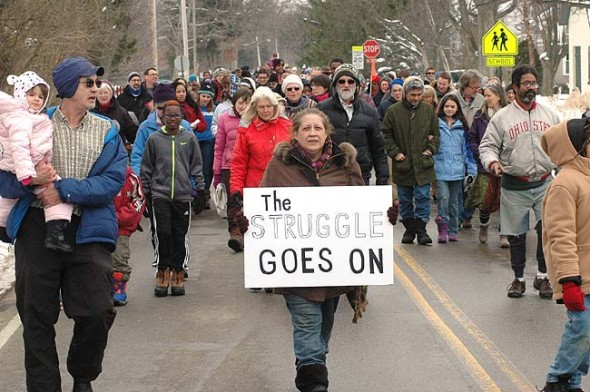 While many see Martin Luther King Jr. Day as a break from work or school, this year local organizers are challenging villagers to treat it as a day of learning and giving back.

“A Day On, Not a Day Off” is the theme organizers chose for this year’s Martin Luther King Jr. Day on Monday, Jan. 19. Local events to commemorate the slain civil rights leader’s birthday include a downtown march, music and lecture program, teach-in and service project.

This year’s activities, co-organized by Antioch College, Central Chapel and local residents, were designed to inspire and educate, especially in the wake of recent high-profile killings of unarmed black men by police officers, organizers said. According to organizer Nan Harshaw, the event can help counter the feeling of hopelessness from the “recent forfeiture of young black lives.”

“Of course [at the event] there is always the element of hope — that people will know that in the end we just need to love each other and love better,” Harshaw said. “I’m hopeful that 2015 will bring us all closer.”

Meanwhile, with many Antioch College students — and villagers — on the front lines of protests over the killing of a black man by police at a nearby Walmart, there is some momentum here already in pursuit of social justice, added Mila Cooper, the new director of the Coretta Scott King Center at Antioch.
“Antioch is an institution committed to social justice,” she said.

The annual MLK Day celebration begins with readings and reflections at 9:30 a.m. at the Coretta Scott King Center (Livermore Street at E. Center College Street.), where a light breakfast will be provided. The annual march leaves at 10:30 a.m. from Mills Lawn Elementary School, 200 S. Walnut St., and arrives at Central Chapel A.M.E. Church, 411 S. High St., for an 11 a.m. program.

Speaking at the Central Chapel program this year is the Rev. Joel King Jr. of Columbus, a first cousin of Dr. King. His theme is “His Dream, Our Commitment to Justice.” The program will also feature student essays, songs, and performances by the Booth family drummers and the World House Choir, and will be followed by a free soup lunch.

Afternoon events at Antioch start at 2 p.m. at 113 McGregor Hall with a teach-in on the theme “From Civil Rights to Social Justice” for those ages 13 and up. Separate activities for children ages 3 to 5, 6 to 9 and 10 to 12 will be offered concurrently in a nearby space. That event is to be followed by a closing reflection and refreshments.

Antioch students will also participate in a service project during the afternoon to bake and deliver cookies to homebound elderly in the village in a joint project with the Yellow Springs Senior Center.
Cooper said she looks forward to discussing strategies throughout the day on ways to create consistent local and national initiatives from one-time events like marches and protests.

“We have sit-ins, die-ins, black-outs that are bringing awareness to the issues, but whether they’re impactful in terms of changing our culture, I’m not sure,” Cooper said. “We have to be consistent and to figure out what strategies work for the issues.”

Antioch’s theme for reunion and commencement this June is centered on civil rights and social justice because it will be the 50th anniversary of Dr. King’s commencement speech at the college. Civil rights leader and Congressman John Lewis will give this year’s commencement address. Coincidentally, Lewis co-authored the “King Holiday and Service Act,” signed into law in 1994, transforming the federal holiday into a day of action in honor of Dr. King — the basis for the message “a day on, not a day off.”
Events at both Central Chapel and Antioch are aimed at youth this year, organizers emphasized. Harshaw said it is important to expose young people to such events by reinforcing their beliefs in what’s right.
Started by the late Willa Dallas and continued by African American Cross-Cultural Works and now Central Chapel, the local MLK Day march goes back 15 years at least, Harshaw added.

“It has a great reputation,” she said of the march and program. “Everyone goes home happy.”

On the theme of “a day on, not a day off,” the Corporation of National & Community Service website quotes Dr. King, who once said: “Life’s most persistent and urgent question is, ‘What are you doing for others?’”