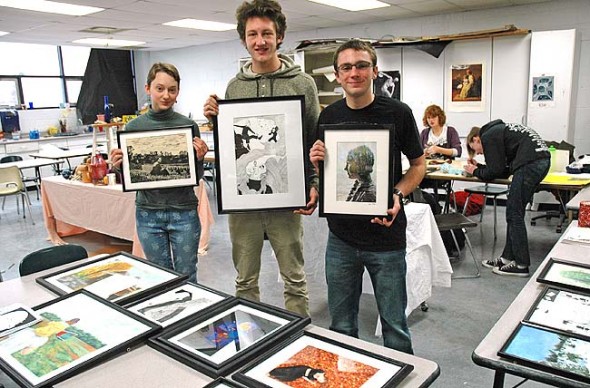 The Yellow Springs High School advanced art class will hold a student art show, Views of the Village, at the Village Artisan’s Gallery, 100 Corry St., during the month of January. An opening event will take place on Friday, Jan. 9, 6–8 p.m. Some of the artists include, from left, Nadia Mulhall, Tom Amrhein and Lake Miller. (Photo by Lauren Heaton)

Young YSHS artists to host their own show

When the seven artists in Elisabeth Simon’s advanced art class set out to create a public art exhibit at the beginning of the year, they had no idea that showing their work would be so much more difficult than creating it in the first place. Planning and budgeting the framing and finishing, auditioning the work and promoting the event was all part of the steep learning that went into the art class’s project as part of the project-based learning curriculum.

Simon felt the experience was eye-opening for aspiring artists, who don’t often think of the behind-the-scenes work that goes into not just making their work, but selling it. She also hopes the public display will raise the stakes for her students and motivate them to create not just good but excellent work.

“It was a good learning experience for them — as with most advanced students in school, it’s easy for them to produce art, so having a public gallery show helps them to create better work for themselves.”

Community members can see the results of those labors themselves at the opening event for the show, Views of the Village, on Friday, Jan. 9, 6–8 p.m. at the Village Artisans Gallery, 100 Corry Street.

One early aspect of the public show the artists grappled with was settling on a cohesive theme, starting with “places in the village.” Knowing that iconic downtown locales such as Oten Gallery, The Emporium, Ha Ha Pizza and the Village Cyclery were most marketable, the students made a tough but honest call about their own personal vision of Yellow Springs.

“Though the marketability of the more iconic places works, they weren’t passionate about them and it felt more forced,” Simon said. “They wanted their own unique perspective — selling the art was secondary.”

The students decided to stick with their own ideas of the village — places such as the Glen, the School Forest, the Davis Street triangle, and the Highlander Laundromat, to name a few of the subjects depicted in their art.

“Some of us have been here our whole life and wanted people to see this is what Yellow Springs is to me,” Lake Miller said.

Several of Miller’s photos, for example, include the profile of a girl superimposed over the Yellow Spring and the Pine Forest. Two of Mulhall’s linoleum prints depict spaces in the Glen, including one of the Horace Mann sculpture with bright red shoes. Sarah Jako created an oil pastel of the Hyde Road covered bridge; Simone Collins made a digital drawing of a girl on a stool drinking a hot coffee; Madeline Nielson painted oils of the Glen; and Maddie Allen drew the inside of Current Cuisine from the unusual perspective of someone on a tall ladder looking out toward the street.Tom Amrhein used pen and ink to draw several whimsical scenes of villagers swirling around with smoke, wind and music. In all, there are about 25 pieces in the show.

After creating their images, the student artists vetted the work with professional artists in the village and altered them based on the feedback. They made a group presentation of their work to the Village Artisans committee, whose members accepted their proposal for a January exhibit. The students then set to work matting, shopping for low-cost frames, planning and promoting the opening and creating promotional items, such as magnets and notecards, to sell and raise money to cover their costs and use any excess funds to purchase new art supplies for the school.

“As an artist, there’s so much more than just creating your work, you have to buy frames, create mats, prep for the gallery display, plan and promote the exhibition and budget for all those things,” Simon said, adding that most are things the students have never done.

The work will have a life beyond the upcoming Village Artisans show, as advanced placement students are required to create portfolios demonstrating progress during the year. Some of the students are seniors and can also use their art for application to programs beyond high school.

But that’s planning that artists always have to think about when creating work to sustain them. These young artists are creating a project-based learning experience with lessons they will draw on well into whatever work they end up doing.

“Every class thinks of PBL, and we thought one really cool idea would be to create our own art and exhibit it in Yellow Springs,” Miller said.

The community’s participation and feedback will help to determine whether their total body of creative and logistical work was a job well done.