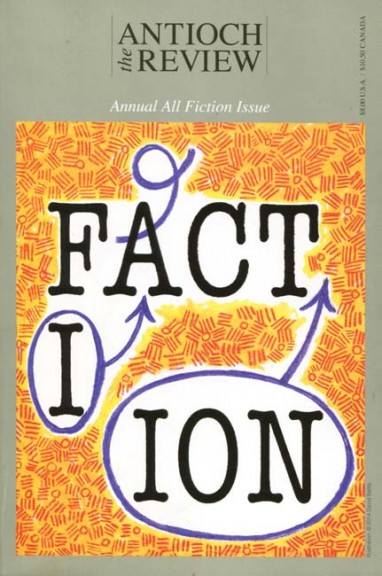 The Antioch Review was nominated for its fourth “Ellie” award from the American Society of Magazine Editors. Shown above is the cover of the 2014 summer issue, designed by David Battle.

When Bob Fogarty became editor of the Antioch Review in 1977, his goal in maintaining the college’s literary magazine was to keep surprising readers with fresh, lively work. And while this little magazine with a circulation of 3,500 can’t compete in size with the likes of The New Yorker, Harper’s and The Atlantic, it does hold ground in the quality of the work it publishes. Fogarty believes the Review’s strength comes from its openness to unvetted submissions, otherwise known as “the slush,” which is where the most uncanny, surprising work appears.

Critics must agree. This year the Antioch Review was nominated for its fourth “Ellie” award from the American Society of Magazine Editors, which, in association with the Columbia University Graduate School of Journalism, honors dozens of magazines each year in categories ranging from photography to fiction, essays and magazine of the year. The awards ceremony was hosted this week in New York City, and while the Review did not walk away with a National Magazine Award, being nominated multiple times as a finalist shows Fogarty that the publication is on the right course.

“It’s a little magazine and a literary magazine. The fact that a little publication can compete against big ones feels to me like David and Goliath,” Fogarty said in an interview last week. “The fact that they’ve chosen us is really quite amazing.”

The Review was nominated for Rick DeMarinis’ short story “Afternoon in Byzantium,” which appeared in the 2014 summer issue. The other nominees for fiction were The New Yorker for “The Emerald Light in the Air,” by Donald Antrim and for “Scheherazade,” by Haruki Murakami, The Paris Review for “Miss Adele Amidst the Corsets,” by Zadie Smith, and Virginia Quarterly Review for “Serve-and-Volley, Near Vichy,” by Greg Jackson.

On Tuesday morning, the Huffington Post reported that the New Yorker had won this year’s fiction award for “Emerald Light,” which ran in the Feb. 3, 2014 issue.

While the New Yorker’s circulation is over 1 million readers, the Paris Review and the Virginia Quarterly, with 16,000 and 3,000, respectively, are more comparable to the Antioch Review. And according to Fogarty, DeMarinis stands out as a stylist of short thrillers hinged on deep character development without the dryness of predictability. “We’ve been publishing DeMarinis’ work since 1986 and most of the stories he writes — they’re mystery stories with something deeper,” Fogarty said. “In this one, a man dies at the bottom of a swimming pool, and he’s very conscious of this. His character is fleshed out over the course of the story, and it doesn’t matter what happens to him because it’s irrelevant to his sense of reverie. That’s what makes it true to life.”

That’s the quality of work that draws the eye of Fogarty, who, except for an advisory board of notable authors such as T. Coraghessan Boyle, Gordon Lish and Sylvia Nassar, along with Antioch College alumni writers, is the final judge of prose submissions. Poetry editor Judith Hall, who resides in California, chooses the magazine’s 16 pages of poetry each quarter, and Muriel Keyes is the magazine’s business manager. Per tradition, the Review has always used a bevy of volunteer readers from the Dayton area who write reviews for Fogarty. His only stipulation for the job is that the readers love to read. While some magazines take only solicited work, the Review is one that accepts unsolicited submissions, including high quality work from literary agents, which Fogarty believes is very important to maintaining the review’s freshness.

“What you want to get is many different kinds of eyes on something so you don’t fall into the trap of being kind of monochromatic and just publish this or that kind of story,” he said.

The Antioch Review receives about 4,000 manuscripts a year and publishes less than 1 percent of them. And to those who ask what the magazine is looking for, Fogarty’s standard response is, “‘I’m looking for your best work.’ My credo is it’s open to all comers. The best writing in America is published in small magazines.”

That open approach means a lot more reading than Fogarty and certainly the volunteer readers get paid for. But for Fogarty, that’s off point.

“There’s no end to the reading — the manuscript file is endless. I never get to a point at which I don’t have manuscripts to read, and it becomes difficult to manage the volume,” he said. “We’ve talked about stopping reading the slush, but I’m loathe to do that. There should be venues that are open to anyone — that’s one of the important facets of the literary magazines, and we should maintain that.”

The Review resides in the Antioch College library and receives a subsidy from the college, whose faculty started the magazine in 1941 as an alternative to the Facist/Communist movement, according to Fogarty. The magazine has since taken a more literary turn and generated a $700,000 endowment that helped sustain it during the college’s closure from 2008 to 2011. And though the magazine, published by Jane Baker and designed by David Battle, is committed to print for the long haul, the digital subscriptions sold through the JStor online not-for-profit magazine store, have increased international readership. According to JStor figures, the Review sold 109,000 downloads in 2012 alone. That means that the magazine is more widely read than its print circulation would indicate — a sign that it is possible to expand the Review’s readership.

Next year the magazine is trying something new by publishing a special issue and co-sponsoring a conference with the Bard Graduate Center on the future of museums, including institutions such as the Met, the Louvre, and the Prado, as well as the 35,000 small museums across the U.S.

Fogarty has been at the Review for 38 years but is, as he said, “still ambulatory” and shows little sign of tiring of his job. And as long as the magazine continues to be able to run with the more heavily endowed competition, it will stick with its proven method of judging submissions.

“I don’t look at credentials. It’s not the cover letter and the associations — that doesn’t mean anything,” he said. “It’s really the work itself. It’s the qualitative question.”