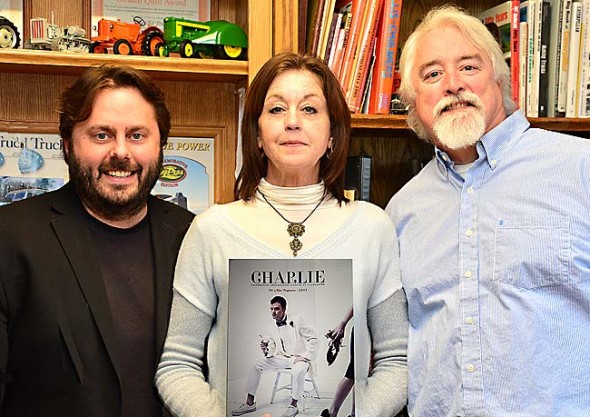 Local magazine publisher and communications company Ertel Publishing recently purchased CHARLIE, a regional magazine that covers the arts and culture of Charleston, S.C. From left are Ertel’s owners Ben Smith, Vicki Ertel and Patrick Ertel with a copy of the magazine. (Submitted photo)

A local publisher has purchased a Charleston, S.C. magazine focused on that region’s arts and culture.

Ertel’s owners said in a recent interview that the acquisition is part of a larger growth strategy for the 26-year-old local niche magazine publisher looking to expand into regional publications and other media communications. Details of the acquisition were not disclosed.

Started by Patrick Ertel in his basement in 1988 to publish Antique Power, a magazine for tractor collectors, Ertel Publishing currently puts out two of its own magazines and publishes three others. In addition, the company writes, edits, and acquires images for educational textbooks and recently launched High Street Communications, a marketing and advertising division.

“We started with solely print magazine publishing and the new media [with High Street Communications] has given us the opportunity to expand,” Ertel said. “It has come to fruition now with buying CHARLIE, which uses every form of media.”

Ertel Publishing is co-owned by Ertel, his wife Vicki Ertel, the company’s chief financial officer, and Chief Operating Officer Ben Smith. It has 11 full-time employees at its office at 506 S. High St. with two more employees (including Smith) now working out of Charleston.

According to a press release, plans for the CHARLIE brand include reviving its print magazine, a free glossy magazine with a circulation of 10,000, and restarting CHARLIE-organized local events. CHARLIE founder and sole employee, Caroline Nuttall, will stay on as publisher. She founded the brand six years ago.

Vicki Ertel said Ertel Publishing found in CHARLIE a strong brand in one of America’s fastest growing cities, adding that the two companies had similar values. She said Ertel has been looking to break into the regional publishing market for some time and said there is an opportunity to grow readership both within, and outside, the Charleston region.

“This is an up-and-coming genre for magazines,” Ertel said of regional publications. “People love where they live and people move from where they love and want to stay connected,” she said, citing the national readership of New England regional magazine Yankee.

Patrick Ertel said that the company is primed for growth with High Street Communications now based in two different cities and that Ertel Publishing may look to acquire other regional publications. However, the recent moves are not wholly dissimilar to the company’s past, he added.

“Our core business has stayed the same,” Ertel said. “People like holding a paper magazine in their hands, feeling it, and putting it down when they want.”

Ertel Publishing’s decision to stick with print has paid off, added Smith, who joined the company in 2010. While other publishers forayed into digital printing, the ompany maintained its commitment to print, and with a loyal subscriber base has weathered the explosion of digital media, he said.

In addition, Ertel puts on an annual vintage truck show at Young’s Jersey Dairy and sells merchandise to go along with its two magazines — Antique Power and Vintage Truck — which are sent to subscribers and sold at newsstands.

Patrick Ertel, an aerospace engineer, founded Ertel Publishing after attending a vintage tractor show and seeing that its enthusiasts didn’t have a place to connect and exchange information. He founded Antique Power and began writing, editing and publishing the issues in his Davis Street basement before moving the company to an old photography studio of Axel Bahnsen’s on Glen Street. Ertel purchased the former YSI machine shop on High Street in 2001 and remodeled it for the growing company’s offices.

Ertel still edits and writes one article for each issue of Antique Power, which boasts a circulation of 51,000 according to its website. Vintage Truck, started in 1992, has 35,000 subscribers. Ertel Publishing also publishes Ohio Valley History, Lawn & Garden Tractor and The Hart-Parr Oliver Collector.