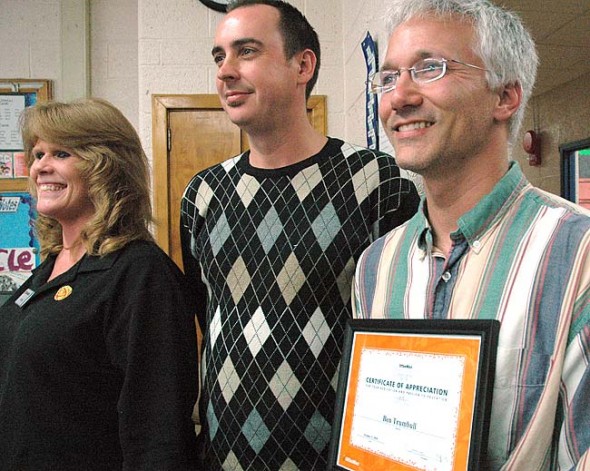 Longtime Mills Lawn teacher Ben Trumbull was suspended on Friday after being charged by Franklin County authorities with pandering sexually oriented matter involving a minor. Trumbull was arraigned on Saturday in Franklin County Municipal Court, where he pled not guilty to the felony charge.

Trumbull, 48, was arrested at his home in Columbus on Friday but posted bail after Saturday’s hearing and was released from Franklin County Jail on a bond set at $35,085. According to court records, a preliminary hearing has been scheduled for Feb. 23.

The charge was filed by the Franklin County Internet Crimes Against Children Task Force, whose agents were alerted by the statewide Internet crimes monitoring program in December that Trumbull was suspected of downloading and viewing “questionable” content off the Internet on his home computer. The task force began its investigation at that time, and last week executed a municipal search warrant of his home. Task force agents informed the district of the arrest on Friday and confiscated Trumbull’s work computer as well.

The agency could not say how long they suspected the offense had been going on, but the content involves pre-pubescent children, the task force representative said. The task force does not pursue pornography involving 15-, 16-, and 17-year- old minors who could be confused with an adult. The agency could not identify the minors involved in the material Trumbull possessed but had no reason to believe that he knew them personally, the agent said.

The municipal case against Trumbull is expected to be dismissed so that the task force can gather additional evidence and present a complete case to either the Franklin County Common Pleas Court or the U.S. Attorney’s office sometime within the next few weeks to six months, the task force agent said. Given ample evidence, Trumbull could then be indicted into either common pleas or the federal court system.

According to the Ohio Revised Code, “pandering sexually oriented matter involving a minor” can be creating, distributing, receiving or possessing material that shows a minor participating or engaging in sexual activity. The offense is a felony of either second degree (distribution of material) or third degree (receipt of material).

Trumbull was suspended from school without pay on Friday, pending the outcome of court proceedings. According to a letter Yellow Springs Schools sent to parents on Friday, he was instructed not to have contact with students or staff or enter school property. Trumbull’s attorney did not return calls this week.

In an interview this week, Yellow Springs School Superintendent Mario Basora said the school was working with its students, families and staff to deal with the news about Trumbull, who has taught at Mills Lawn for 20 years. On Friday evening, Mills Lawn Principal Matt Housh, Counselor John Gudgel and Basora personally called the families of every student in Trumbull’s fourth-grade class to inform parents and offer support in talking to their children. The school also offered counseling support for students at both Mills Lawn and McKinney/YSHS and scheduled a meeting Tuesday morning for fourth-grade parents with the same administrative team plus school board member Aïda Merhemic, who is a licensed counselor.

“This event has been heartbreaking for everyone in the community, especially students, parents, teachers and staff … and we are trying our best to reserve any kind of judgement and work through this together,” Basora said on Monday. “We’re taking all precautions to ensure the safety of our students while the investigation is going on … it’s important to note that we made phone calls to every parent in the classroom and we’ll have more conversations with parents this week.”
According to parent Melissa Heston, the schools have been very supportive of the students’ mental health needs in dealing with the loss of a long-time teacher.

“My concern is that the kids be supported in this transition — it’s almost like a death because they might not see him again. They spent 35 to 40 hours a week with him and all of a sudden he just disappears? The impact to me of that is substantial,” she said. “We all need compassion for Mr. Trumbull, his partner, his family and kids, and compassion for the kids who were with him day to day.”

Trumbull was not at school on Friday, and when fourth-grade students returned to school on Tuesday, substitute teacher Jennifer Clark was standing in for him. Clark is a licensed substitute teacher and a parent in the district who works regularly with Yellow Springs schools. According to Basora, Clark could potentially remain in that classroom for the rest of the school year because if the district hires a permanent replacement, they are likely to do it during the regular summer cycle to find the highest quality candidate.

“We feel lucky we have Ms. Clark ready to do the work, potentially all year,” Basora said.
The Yellow Springs school district has not yet decided how to handle Trumbull’s contract and Basora is inclined to “see how the investigation turns out and let police do their job” before deciding how to move forward.

“I don’t want to incriminate someone who’s innocent — I feel that’s important — I want to make sure we’re giving due process and staying within the law,” he said.

According to Ohio Department of Education spokesperson John Charlton, if Trumbull is convicted of a sexually oriented felony, his teaching license would be automatically revoked. If there is no conviction, the state would open its own investigation based on its unique standards of proof, whereby Trumbull’s license could still be in jeopardy, Charlton said.

In his 20 years with the district, Trumbull has had solid evaluations and positive feedback in his personnel file, Basora said. In 2010 he was nominated for and received a national Office Max award for exceptional teaching. And he has been described by his colleagues as personable and humorous, an amazing teacher, an innovator, a go-getter; and one MLS teacher said that he “will go to terrific lengths to find creative and engaging ways to help each student learn.”

Due to both the nature of the suspected offense and the length of time Trumbull has served in the district, the school wants parents to be able to decide what to tell their children and how to disclose it. The school took measures to inform just parents on Friday, and will continue to offer group and individual counseling as needed for students at both the elementary and high schools. Basora encourages families to speak up about their needs and recommends communication resources such as the National School Psychologist Association under “School Safety and Crisis Resources” or the PBS Parents website on “Talking with Kids About News.”

“You’ll have kids for the last 17 to 18 years who had Mr. Trumbull who absolutely loved him who will be hurting now and for some time,” he said. “Parents have to use their best judgement, and we recommend they seek support from counselors and therapists to figure out the best way to talk to their children about this.”