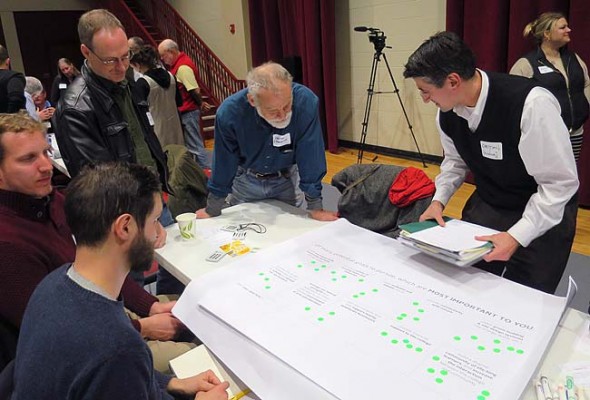 About 200 villagers took part in last Sunday’s Antioch College Village opening charrette event at the South Gym. Shown above are, clockwise from bottom left, Alex Melamed, Andrew Kline, Kevin Mulhall, Keith Kresge and a facilitator are shown engaged in an exercise to establish priorities for the project, which seeks to build homes on the college campus. The wrap-up event takes place March 5, at 6 p.m. in the South Gym. (Photo by Amy Magnus)

These were only a few of the many ideas, both big and small, that emerged Sunday evening at the Antioch College Village Charrette. Organizers of the Antioch College Village, a proposed project to create about 160 homes on campus, had invited the community to join in this design activity, and the community responded: about 200 people attended the three-hour event on a cold and snowy night. A talk by Oberlin professor David Orr was canceled due to bad weather.

“We live in an interesting time. The dream of what a home looks like is being redefined,” said design consultant Victor Dover of the firm Dover Kohl of Coral Gables, Fla., in opening remarks. The firm has hosted about 200 such design events, according to Dover.

In introduction, Wiggins, the former head of the U.S. Green Building Council, emphasized the importance of environmental sustainability to the project. The Antioch College Village aims to use the Living Community Challenge as its framework, which calls for buildings not just “less bad” than traditional construction, but ones that “actually contribute to the health and vitality of natural systems,”  including net positive energy creation, he said.

The Sunday event featured small groups engaging with each other to identify priorities for the project, as well as locate potential sites for the homes. According to consultant Dover, the activity was “in the spirit of a barn-raising, neighbors getting together to help each other out.” Later, spokespersons for each table reported on their “three big ideas” to the whole group.

On Monday, one participant, Toni Dosik, said she came away very impressed with the event, and with the Antioch College Board of Trustees for “choosing to spend what it must have cost to bring in such a professional team — it was a high caliber of consultants.”

Dosik was also impressed with the inclusiveness and transparency of the process, and disappointed only that the group lacked racial diversity.

Also impressed, Jane Baker said of the consultants running the event, “They figured out how to get the community involved, and to get feedback efficiently. It was very exciting, and something Yellow Springers are obviously enthusiastic about.”

For Amy Magnus, the introductory remarks from the consultants helped to provide a framework for the participants to consider a wealth of ideas without arguing.

“It worked well in our group,” Magnus said. “We were given good guidance.”

Magnus was also impressed that organizers offered a variety of methods to identify preferences, including drawing, writing and an oral report from each table. “They had a good way of capturing people’s input,” she said.

The five-day event continued Monday through Thursday, with a design studio in the South Gym open to the public.

On Tuesday, consultant Wiggins reported that “things are going fabulously” at the event. Along with the enthusiastic participation on Sunday, many villagers have been stopping in to the weekday design studio, along with attending special meetings around the topics of housing, schools and business, among others, Wiggins said. “Participation is outstanding,” he said.

The designers are working “late into the night” to capture ideas and at this point, “there’s clearly a pattern of development emerging,” he said.

Villagers are encouraged to attend the charrette’s final session on Thursday, March 5, at 6 p.m. to  hear from consultants about their work in progress.

Following the charrette, the designers will further refine their designs before doing a financial analysis of the project. Those will be presented to the Antioch College Board of Trustees in spring or early summer, “for their approval, and hopefully, we’ll move forward,” Wiggins said.

The idea for the Antioch College Village emerged several years ago during a visit to renowned architect and Antioch alum Robert Davis, the creator of the planned community Seaside, Fla., according to Antioch College President Mark Roosevelt in his opening remarks Sunday evening. Davis urged Roosevelt to find ways to incorporate adults into the college community because, according to Davis, “integrating adults into your campus is the next big thing in American higher education.”

The concept resonated with Roosevelt, who initially saw the project as targeted toward “next chapter people,” those in their mid-50s to their 80s who “want to belong, want to be active, want to be part of something that matters,” he said. Many of that demographic came of age in the 60s and 70s, a time of great idealism and, “we’ve been pretty disappointed,” Roosevelt said. “Many would like to spend their later years together, reaffirming those values.”

When Roosevelt has asked “next chapter” alums and others if they find such a concept appealing, the response has been overwhelmingly favorable, he said. And to the organizers’ surprise, a feasibility study indicated that the Antioch College Village attracts not only Baby Boomers, but those of diverse age groups, so that the original market has broadened.

Little of the Antioch College Village is “set in stone” at this point, according to Roosevelt, but one thing is clear. The project has to be income-producing in a way that benefits students at the college, which has a far smaller endowment than most liberal arts colleges.

“We need to think creatively about other sources of revenue,” he said.

So it makes sense to consider the assets of Antioch College, including Glen Helen, WYSO Public Radio and a close relationship with the village, as attributes that might also meet the needs of “next chapter” individuals, along with the financial needs of students, Roosevelt said.

“Our vision is to bring together people interested in finding new and better ways of living together and on the planet,” he said. “And to help support students.”

The News will have a story next week on the March 5 Charrette wrap-up session.