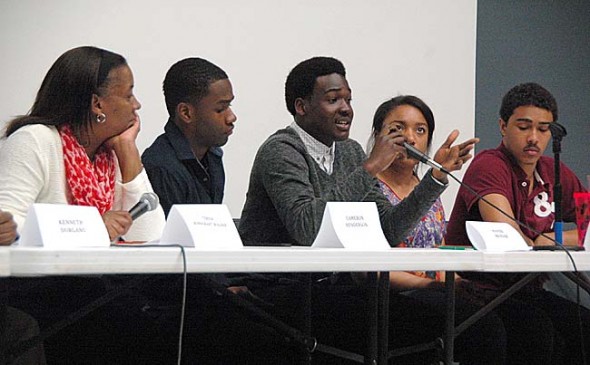 A 365 Project discussion with current and former local high school students took place last spring. The group is sponsoring another one on Saturday, March 21. (archive photo)

After being postponed last month due to weather, the “Mixed Race Discussion and Other Stuff” event has been rescheduled for Saturday, March 21, from 1 to 4 p.m. at Mills Lawn School. Organized by the 365 Project, the discussion will be broken into groups of about 10 people that will each focus on three topics, including, 1) Talking with your children about police violence that is perpetuated towards people of color 2) How as parents/caregivers can we deal with identity issues in bi-racial and multi-cultural families? 3) How can we promote self-esteem for African-American children and the historical importance of African-Americans in America? A large group dialogue will follow. All are welcome, and youth are strongly encouraged to attend.

The 365 group initiated the event after some local parents began asking the schools about how they should talk to their children about issues of race and discrimination. The question arose in the context of national unrest over police shootings of African Americans over the past eight months. As the chairperson of the 365 Project, a group that facilitates discussions about race issues in the village, John Gudgel, also the Mills Lawn school counselor, noted that it had been several months since the village had a “courageous conversation” about race and wanted to sponsor one for both adults and youth.

For more information, contact John Gudgel at jwgudge@sbcglobal.net or Joan Chappelle at jmchappe@earthlink.net.