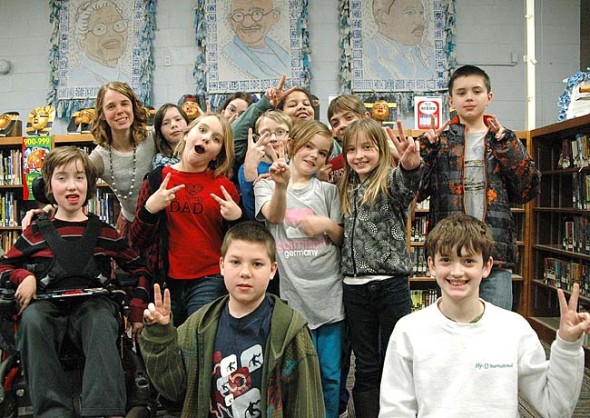 What began as an anti-bullying campaign at Mills Lawn Elementary School has evolved into a school-wide focus on empathy, inclusion and conflict resolution.

In its third year, Project Peace is teaching students to mediate their own conflicts through respectful communication and other strategies.

School guidance counselor John Gudgel has already seen the impact — fewer students need his help to mediate their conflicts, he said this week.

“We have 350 kids here, so there will be conflicts,” Gudgel said. “But students are now have the skillset of how to resolve conflict. There certainly has been a change — it seems there are less conflicts.”

Villagers are also invited to share their stories of peacemaking and acts of kindness with students by submitting them to projectpeacemillslawnschool@gmail.com.

While previous years of Project Peace have focused on role playing difficult situations and learning from examples, this year students are learning how to be proactive in everyday interactions, Gudgel said. Added Allison Paul, the media club facilitator who is leading a peacemaking media project: “It’s really about promoting the positive attitudes and attributes that support the school’s culture.”

This year students in Paul’s media club will create stop-motion animations, posters and skits depicting various scenarios of peacemaking at the school. In addition, teachers throughout the school are set to create their own project-based learning assignments on peace.

For example, 10-year-old Sophie Bottelier and 11-year-old Camryn Strolger are working on a skit to help younger students understand peacemaking and to use the strategy of “killing them with kindness” by responding to a mean comment with a compliment. Bottelier explained peacemaking in her own words:

“I think peacemaking means that everyone is together and cooperating and listening to one another and not just arguing,” she said. “It’s about enjoying each other, not fighting.”

Ty Housh and Aiden Adamson, who are both 10, are creating a whiteboard animation for their project. Housh said peace is about more than just speaking up when bullying or fighting arises.

“Peace means no fighting, no war, everyone is treated the same way and no one is excluded,” he said.

Earlier in the school year, visiting artist Ara Beal did an improv project with students as part of Project Peace. Gudgel also presented each classroom in the school with a Peace Wheel that covers peacemaking strategies from ignoring to asking for an apology. Gudgel then set up a Peace Place in each classroom so students could have a designated space, with its own ground rules, to work out an issue with another student with or without the help of a teacher.

After three years, Gudgel is seeing the impact of Project Peace.

“The tone and climate of the school has changed,” Gudgel said. “We are empowering them to deal with conflict. Whether they keep it as a skill for life, I don’t know.”