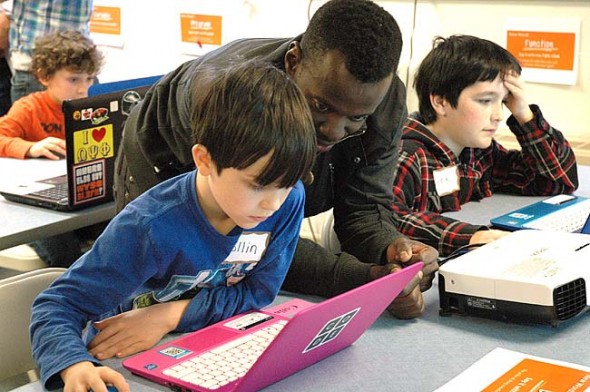 Local computer whiz Ishema Umuhoza loves to play soccer and got seriously into bicycling to improve his overall fitness on the field. His competitiveness reared its head on the road recently when he learned through Strava, a social fitness app, that his speed on the route between Yellow Springs and Xenia was way slower than the hundreds of other cyclists who make that trip and log their times with the online cycling community. So Umuhoza got busy. He engineered a computer program that tracks personal fitness data at his cycling studio that pushed him to improve his spot on the Xenia route to 20th.

In a recent interview, Umuhoza said that computer programming is a skill more people should have because it’s embedded in everything we do today, from our personal recreational and working lives to the world stage. But how does one learn those skills when they aren’t taught in local schools or clubs?

Thanks to local residents Basim and Toylyn Blunt, who started the Yellow Springs Code Academy this spring, there is finally a place in the Miami Valley region for youth to learn the basics of computer programming. The classes are based on the Code.org curriculum founded by two digital entrepreneurs who advocate for more computer science in public schools. Their “hour of code” website launched on Dec. 9, 2013 and became the number one YouTube video that day. The organization, supported by tech giants such as Bill Gates of Microsoft and Mark Zuckerberg of Facebook, offers free coding instruction for various levels.

YS Code Academy drew local youth of all ages to an open house earlier this month at its home in the Kettering Science building on East South College Street.

Elementary-aged Collin Calfee and Zan Holtgrave appeared right at home sliding in front of the laptops and Kano computers stationed around the room. After a brief introduction on the coolness of coding, they were off, deftly dragging their mice to create block patterns the computer could read. Using some simple math and a lot of logic, within an hour, one, two and then several of the 7, 8 and 9-year olds had successfully completed their first hour of code.

“Ding ding ding ding!” sang Blunt, who studied theater and is a WYSO radio host. “I think we have our first coders!”

A round of fist bumps for all.

The aim of the coding group is not to create the next generation of Google engineers, Toylyn said, although her daughter Kate Caldwall works for Microsoft. The point is to expose students, especially girls and minorities, to computer science and help them see it as an accessible field rather than an intimidating one.

“It’s not important that everyone become a coder. The point is to open the door so they know about it — because to not know it is dangerous,” she said, referring to the negative tendency to be a digital consumer rather than a digital creator.

The academy’s five other board members are also committed to the same task of giving kids more control over their digital tools. Local resident Joe Althaus, an engineer at Real Art Design Group in Dayton, writes code to create tools that help people in their jobs and daily lives. Having grown up on a farm in Troy, he coded a program he calls Smart Barn, which allows farmers to use a mobile device to monitor data such as barn temperature, feed levels and water pressure from a remote location at an affordable cost. The tool uses the cell phone network and is especially valuable to those who don’t have access to the Internet.

Althaus’s story is a good example of how to use a coding background for something productive.

“I was thinking how could I give back to my family and background, and this tool essentially protects a farmer’s agricultural assets,” he said.

Of course, becoming a coder can take years of work. But it grew out of pure curiosity for Umuhoza, a board member of YS Code Academy. He was exposed to simple computing at a private elementary school in Rwanda in the early 1990s. During that country’s civil war, he alone was sent to Dayton’s House of People, where someone had donated a computer.

“No one knew what to do with it or how to use it or even plug it in,” Umuhoza said.

Somewhat interested in figuring it out and also keen to avoid having to speak what would be his fourth language, Umuhoza sat in front of the screen every day for months until he stumbled on “??” as a command for options, and then “win” as the option to start Windows. He stayed with computers from that day forward, eventually becoming the network designer at Servlet.

Umuhoza doesn’t love computers, he said. But he loves to solve puzzles and uses computers to help him do just that at work. He doesn’t love coding either, but he sometimes gets so fixated on using code to solve a problem, that he can spend weeks on a code, stopping only to eat and shower, until he gets it right. And he hopes that students at the Academy will see the value in mastering these powerful tools to help them solve the problems they’re interested in as well.

The Code Academy classes are geared for youth ages 4–13, and each is limited to just a handful of students for highly individualized attention. Options include an introductory class, Code Ninja, for early readers; Code Warrior, for developing interactive games and stories; Code Builder follows Code Warrior with more complex functions; and The Kano Krew, using a coding kit based on the Linux operating system used at the International Space Station (Kano can be programmed to output real code in Javascript and Python.) Classes cost $100 for each four-week session, and those interested are encouraged to call the Blunts at 937-554-3883.

The Yellow Springs Code Academy Resource Board, self described as “a small group of cool nerds,” also includes local residents and computer engineers Jake Monat and Cyprian Sajabi. The academy will be open to members on Saturdays, starting May 9, from 1 to 4 p.m. at the Kettering building at 150 E. South College St., entering from the rear parking lot. Advance registration is required via the website, yscode.org.