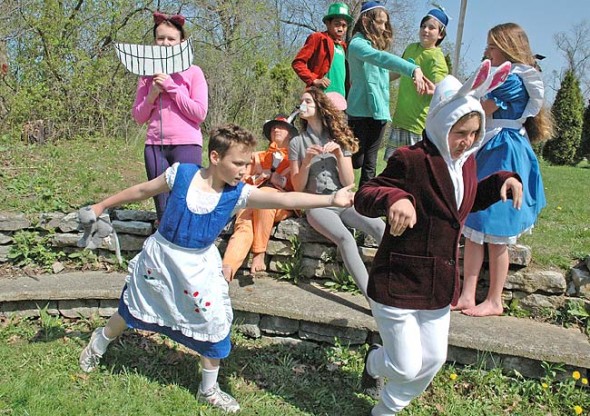 A children’s book that started as an improvised story to entertain a 10-year old girl on a row boat named Alice is being staged by children of the Antioch School.

On the 150th anniversary of the publication of “Alice’s Adventures in Wonderland” under the pseudonym Lewis Carrol, Antioch School students will fall through the looking glass into a world they say is ridiculous, coo-coo, strange, creepy and confusing.

“Alice in Wonderland” will be performed at 7 p.m. Friday, May 1, and Saturday, May 2, at the Clifton Opera House, 5 S. Clay St. in Clifton. Admission is free, while donations help offset the costs of production.
Officially, the play is directed by older group assistant teacher Sally Dennis and co-directed by older group teacher Chris Powell, but for students who largely self-direct their own learning, they are the actors, directors, tech crew, marketers and more.

Read the April 30 issue of the News for the full story.