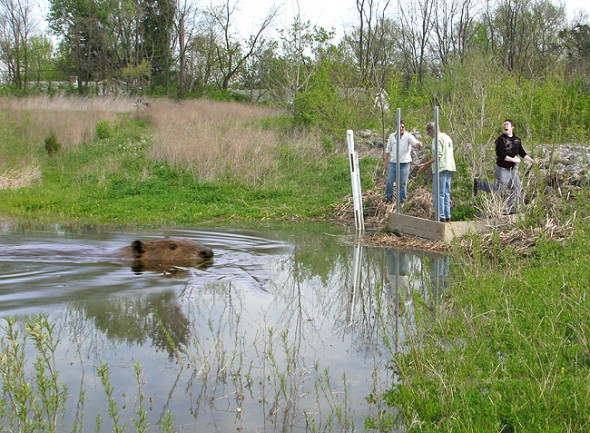 What started out as an ecologist’s dream ended up a nightmare mired in mud, myth and misery.

Rainer Wasserman is a 38-year old ecologist at The Ohio State University of Ohio, whose work used to focus on wetland restoration and ecosystems.

“When I first heard it, I didn’t believe it,” he said, shaking his head. He was referring to the first confirmed sighting of the Castorimorpha megaloenochae, a giant aquatic relative of the beaver, whose destructive power is equalled only by its orneriness. “I never saw one; neither did anyone else I’ve worked with over the years. Until recently, that is.”

The almost mythical creature came to the forefront recently when a 3-acre detention basin along King Street flooded in 2014. Great piles of debris blocked a culvert that allows for the basin to properly drain. And though beavers were fingered as obvious culprits, no one, in the basin’s ten year history, had ever actually seen the animals in the act of building the dams.

As scientists, citizens and neighborhood residents stood at the water’s edge Wednesday morning, debating the benefits of continued dam removal versus allowing the fledgling wetland to take hold, an elderly gentleman crashed through the reeds and mud. Identifying himself only as “C.J.”, he shouted fitfully, “You have no idea what  you’re dealing with here! No idea! No…,” and collapsed.

“It was then that the water stirred,” Wasserman recounts. “I thought it was the wind, but there’s a wake the size a boat would make, only there’s no boat. I shouted to the old man to get up, as the wake was headed towards him. Then that I saw it.”

As Wasserman and two others stood near a “beaver deceiver,” a device meant to let beavers build dams while still allowing drainage, the elderly man slowly sank into the water. Moments later, Wasserman recalls, muddy red billows spread like dirty clouds up to the water’s surface. “The other guys didn’t even notice; they were still arguing. But that monster stuck its gigantic head out of the water, so silently, and was headed straight towards us.”

Resident Al Whet witnessed the entire event from the northern edge of the basin, and was able to capture the beast on camera before he himself fled. “I used to be a big proponent of the wetland here,” he said. “People complained that there’d be mosquitos, or that the frogs would keep them up at night; that was trivial stuff.” But he says he’s changed his mind, if this is what wetlands mean. “Bring on the cement trucks, I mean, this thing has got to go! I saw it kill.”

Wasserman is of a similar opinion, though it didn’t come easily. “I spent my entire academic life studying and stumping for wetland habitat creation and restoration. I ignored the rumors that float around the fringes of ecology departments. Now that I know, I can’t in good conscience continue. My peers and I just barely escaped with our lives.”

Village police have cordoned off the area, and are beginning to fill in the missing pieces of ten year’s worth of missing dog, cat and occasional child reports. “We’re troubled by the situation, as everybody is,” says Village Police Chief Heller Highwater. “There’s going to be some reevaluation by the department of what we call the ‘crazy file.’ “

Highwater says there are provisional plans to call in the Army Corps of Engineers to drain the basin. “We might even send one of our own village crew to train with them, for just these kinds of situations,” Highwater said.