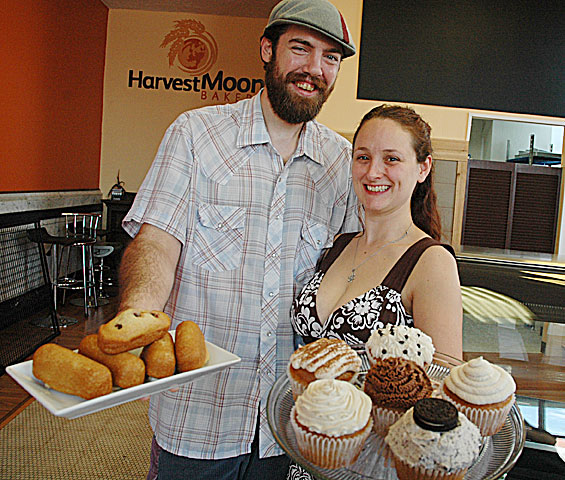 The idea of a vegan dessert is, to some, a contradiction in terms. Without milk, butter and eggs, can it qualify as a deliciously decadent meal-ending indulgence? More to the point, can it taste good?

But just one bite of the vegan treats concocted by Yellow Springs couple Chris and Andrea Hutson — a lemon drop cookie, cream-filled twinky or cinnamon roll — will turn any skeptic into a believer, they say. At their new all-vegan Harvest Moon Bakery, opening this month in downtown Xenia, the Hutsons are betting their dairy-free cakes, cupcakes, muffins, cookies, scones, biscotti and donuts will convert the masses.

“I’ve had people call me a bold-faced liar to my face,” Chris Hutson said. “They just don’t believe me that it’s vegan. It’s just too moist, too good.”

Harvest Moon Bakery opens at Main Street and Detroit Street in Xenia, the former site of the Oasis Café, on Friday, Aug. 23, with a grand opening and ribbon-cutting to take place on Sept. 6 at 5 p.m. coinciding with downtown Xenia’s last First Friday of the summer.

Some baked goodies on their constantly evolving menu will include the couple’s signature “twinkys” which, they say, have far better and healthier ingredients than the Hostess version, and come with vanilla, chocolate, raspberry or other fillings. Other goodies: tiramasu, cheesecake, lemon lavender cake, carrot ginger cake with fresh ginger and candied ginger garnish, blueberry cinnamon muffins, strawberry banana muffins, cookies and cream cupcakes, oatmeal cream pies, apple oat bars and more. They’ll also offer gluten-free desserts and can take special orders for desserts containing eggs and dairy. They plan to serve coffee, tea and other beverages by the grand opening.

Since 2008, the Hutsons have operated Harvest Moon Creations as a commercial bakery selling wholesale baked goods to area restaurants like the Sunrise Café, the Butter Café in Dayton and Healthy Alternative in Beavercreek. Licensed through the Ohio Department of Agriculture and run out of their Xenia Avenue apartment in Yellow Springs, Harvest Moon rose to become the sole exclusively-vegan bakery in the Miami Valley, they said.

As their business grew, the Hutsons were running out of space, so they started looking in the area for a commercial kitchen. Though they would have preferred to stay in Yellow Springs, the Xenia property caught their attention at a location — and price — that was too good to pass up. Only when they saw the space did they decide to open up a retail shop too.

Since December 2012, the Hutsons have been busy fixing up the old building, which dates back to 1841. Having passed a Greene County health inspection last week, they’re finally ready to start baking.

It’s the culmination of a long-held dream for the couple, who met at Sullivan Culinary School in Louisville. For both Chris and Andrea, baking was an early love — their baking style, a marriage of traditional family recipes with modern techniques.

A Cleveland native, Chris remembers pulling up a stool to the counter as a five-year-old to help his mother roll out cookies or decorate wedding cakes. And not surprisingly, in culinary school he originally majored in pastry arts. More recently Chris has worked at fine dining restaurants and in the kitchen of the Sunrise Café.

Andrea is a server at Sunrise and previously ran the kitchen at the Community Children’s Center, where she worked for five years. At the Children’s Center, Andrea was known for her healthy snacks and for confiscating unhealthy snack items like juice boxes and fruit roll-ups from students’ lunches. She said she’s come far from her southern Kentucky upbringing, which was heavy on lard and meat, to become a vegetarian and begin cooking healthy food.

“I became aware of how food makes me feel because you are what you eat,” Andrea Hutson said. Andrea then converted Chris, a self-described “meat and potatoes” guy, to the joys of vegetables and healthy, conscious eating.

Andrea also convinced her husband that they should go completely vegan, a move which tripled the company’s sales. Chris saw the demand for dairy-free at Street Fair, where Harvest Moon would quickly sell out of its vegan options to the dismay of later customers.
So what’s their secret to creating good-tasting vegan desserts?

“Something that people don’t realize is that sugar is vegan and everyone loves sugar,” Andrea joked. It also takes a lot of trial and error, Chris Hutson added. Though some things are easy to replace — Earth Balance Spread or non-hydrogenated palm oil shortening for butter and soy milk for cow’s milk —eggs are the most difficult to replace, since they are often a binder for baked goods. So what is the couple’s secret? “We put a lot of love in our product,” Chris said.

Though their vegan desserts are as delicious as traditional ones, they are far healthier, he added.

“Cutting out butter, milk, eggs, we provide almost a cholesterol-free product with a lot less saturated fat,” he said. “If you stacked up our twinky to a regular twinkie, I think people would be shocked at the garbage they are putting in their body.” But their items are no health food.

“No dessert is really good for you,” Chris said. “Deserts are decadent. It’s an indulgence.”

The name Harvest Moon implies a seasonal, ever-changing menu. Fall will bring pumpkin and carrot cakes, apple cider donuts and apple butter made in the style of Chris’ grandmother. Come winter there will be a lot of chocolate and potentially the return of Yellow Springs Brewery twinky.

The Hutsons said they couldn’t have opened their bakery without the support of their family, friends and the communities of Yellow Springs and Xenia. Startup funds came from their own savings and family members. The Hutsons raised $540 through a crowd-funding website to buy the lumber and paint needed to make over the interior of the space, which is no longer plastered with palm trees but tastefully decorated in a pumpkin cream. They’re renting much of the equipment from the former Oasis Cafe, which closed in 2009. Most of the display cases and other furnishings were repurposed or donated. Greene County Career Center students chipped in volunteer labor. “There’s been a lot of the support from folks who know us, know our product and want to see us succeed,” Chris said, joking, “We have a list of people that will have to have some sort of credit line for free food.”