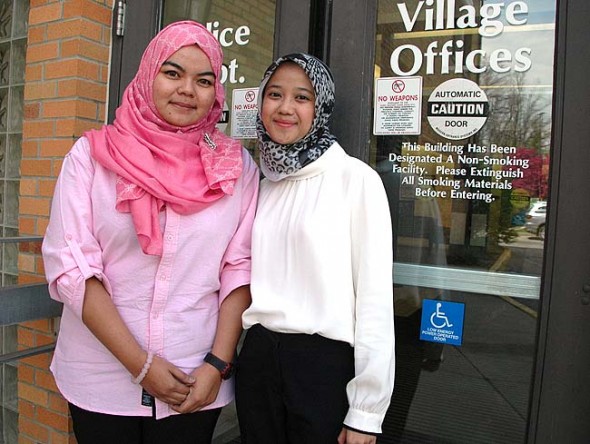 Nadia Jalawi, left, of Malaysia, and Ratih Rahmadanti of Indonesia are young professionals visiting Yellow Springs for a month as part of a cultural and professional exchange sponsored by the U.S. State Department and the International City/County Management Association. While here, they will be helping Village government find ways to engage citizens with social media. (Photo by Diane Chiddister)

Ratih Rahmadanti of Indonesia is keen on learning about civic engagement in a municipal government. In her country, citizens engage with municipal government on social media, but there is no mechanism for them to express themselves at public meetings, nor do citizens sit on public commissions or boards.

“We’re a democracy but we still have a way to go to engage citizens,” she said this week.

Nadia Jalawi of Malaysia is interested in how a municipality can include renewables in its energy portfolio, and hopes to take what she learns back to her country.

In their first trip to the United States, both young women have seen some surprises. For instance, both had been taught that Asians are much warmer and friendlier than Americans, who have the reputation of being individualistic and therefore not especially welcoming.

And they’ve been amazed by American backyards, where they have already been entertained by villagers in the few days since they arrived in Yellow Springs. City dwellers both, the women aren’t used to seeing so much green.

“Our houses are close together. It’s a luxury to have a backyard,” Rahmadanti said.

She and Jalawi are staying in Yellow Springs for almost a month, as part of a cultural and professional exchange program made possible by a partnership between the International City/County Management Association, or ICMA, and the U.S. State Department. The program, launched by the Obama administration, promotes information exchange and mutual understanding between this country and those of Southeast Asia. And as part of the program, Village Assistant Manager John Yung will be traveling to Malaysia at the end of July.

“We are honored to be selected to take part in the ICMA International Fellows exchange program. I look forward to working with both of our young professional interns over the next month and am confident that they will have an enriching and meaningful visit to our beautiful village,” Yung said in a press release.

Jalawi, an engineer, is the assistant director of engineering for the Municipal Council of Seberang Perai in Pulau Pinang, Malaysia, and Rahmandanti is a data analysit in the governance global practices department of the World Bank in Jakarta, Indonesia. While in Yellow Springs, the  women will be looking at ways the Village government can use social media as a way to increase citizen participation, including a possible Facebook page, as well as ways to more broadly engage citizens on online media.

Social media could be especially useful in allowing citizens greater opportunity to alert Village staff to problems or concerns in the village, according to Yung. While villagers now can make calls or come in person to Village offices, those offices aren’t open 24/7, as is Facebook. And Village staff could use social media as a way to keep residents informed of construction projects or other municipal government projects that might affect local lives, according to Council member Brian Housh.

And the women’s visit is especially timely because the Village will this month launch a new Website, which is designed to be more user friendly than the current site, according to Housh.

Housh has signed on as an unofficial host to the women, who are staying in a local home. Before moving to Yellow Springs several years ago, Housh lived for 12 years in Thailand, and while there he traveled to both Indonesia and Malaysia. He grew to appreciate the warmth and hospitality of Southeast Asian cultures, and has since felt that Yellow Springs culture has similar qualities.

“I’ve often felt my easy transition to Yellow Springs is due to the similarities of the cultures, the friendliness, openness and relaxed style,” he said recently.

On Saturday evening, after the women’s first day in Yellow Springs, Housh cooked for them and several other Village staff. He made an Asian style fish dish, he said, and also introduced Rahmadanti and Jalawi to popular American dishes, including pizza and deviled eggs.

As well as helping to create social media and a social media policy for Yellow Springs, the women have a busy schedule. They plan to attend all Village commission and board meetings, tour Antioch College and Antioch University, visit local schools, attend several local churches, and socialize at art gallery openings and several parties. And they’ll be visiting the statehouse in Columbus for a look at state government as well.

The exchange came about after Village Manager Patti Bates came across the program in her connection with the ICMA, Yung said. The cost of the exchange for the Village is about $8,170, with the bulk in-kind labor from Village staff, along with a portion of housing and meals. For its part, the ICMA provides funding for airfare and per diem costs.

It was an honor for the Village to be chosen to take part, according to Yung, who said most of the other program participants are far larger municipalities.

“It’s a great opportunity to build connections with those of other cultures, to learn what they do and share what we do,” he said.