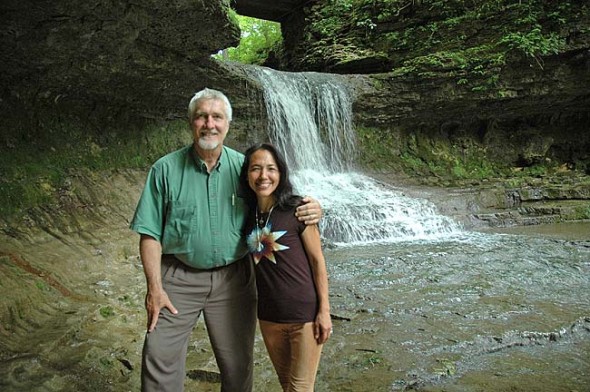 Yellow Springs resident Irene Bedard and Dayton resident Tom Bensman are working with the Miami Valley Council for Native Americans to host the first annual Five Rivers Chautauqua: Mending the Sacred Hoop June 19–28 at various sites in Dayton. For the full schedule of chautauqua events go to daytonpax.com/
fiveriverschautauqua and click on the blue bar. (Photo by Lauren Heaton)

A sacred invitation to unity

Irene Bedard has a broad indigenous heritage with the Inupiaq, Yup’ik, Cree and French Canadian people. But she didn’t connect her background to working for social change when she moved to New York City to start a stage career in the 1980s.

“I was just a girl from Alaska,” she said in a recent interview.

After some success as an actress playing Native American roles in films such as Disney’s “Pocahontas” and “Smoke Signals,” she was going to meet Chief Friend of the Wyandotte Nation when an acquaintance asked her to please apologize for what the Americans did to the Wyandotte people. Following the Indian Removal Act of 1830, the Wyandotte who had settled in the Ohio River Valley were relocated, like so many others, first to Kansas and then to a 20,000-acre corner in northeast Oklahoma.

“I really didn’t know until I met Chief Friend and then I went, ‘Of course this happened here too!’” she said of the estimated 100 million indigenous people of North America who were slaughtered and forcibly removed from land they occupied for thousands of years before the Europeans staked their claim on the New World.

“It was the longest, hardest genocide in the world, and the historical trauma to the earth and the people needs to be healed in order to move forward.”

This month, at the 25th anniversary of Fort Ancient’s celebration of Ohio’s indigenous tribes, Bedard, a Yellow Springs resident, and the Miami Valley Council for Native Americans will host a first annual Five Rivers Chautauqua: Mending the Sacred Hoop to celebrate a “coming home” of the indigenous peoples of Ohio and of all places. The chautauqua, an Eastern Woodlands term for “dialogue” or “meeting of the minds,” is an opportunity for people of every heritage to come together as one, Bedard said, and heal both the spiritual and environmental wounds that have occurred along the road to modernization.

“No one has ever welcomed back the people who were forcibly removed from their land — they’ve never been welcomed home,” Bedard said. “This is unprecendented, and indigenous people are at the forefront of climate change as the holders of ancient knowledge of Mother Earth, where we all came from.”

The Five Rivers Chautauqua events take place June 20–28 at various locations in the Miami Valley, including sacred sites at Fort Ancient, Sunwatch Indian Village, The Dayton RTA Cultural Center and one evening, June 22, at Antioch University Midwest. Ceremonies open with a peace pine planting and continue with both spiritual events, such as the World Peace and Prayer Day ceremony on the Solstice, and civic events, such as the “Bridges Across the Racial Divide” film screening, elder stories and dialogue about race relations, to take place at the Antioch Midwest auditorium.

Yellow Springs resident Raymond Ruka will make a presentation about the Waitaha of New Zealand along with Lakota Elder Cecil Cross. Native Hawaiian Wendy Peters of Dayton will talk about her research on the “indigenous soul wound.” Guy Jones of the Lakota Nation and director of the Miami Valley Council for Native Americans will speak, and Chief Arvol Looking Horse will open World Peace and Prayer Day by telecon from his home in Oregon. Bedard will also screen several of the Native American films and documentaries she has worked on through her film company, Sleeping Lady Films, including “Bridgewalkers,” “Ron and Laura Take Back America,” and “An Unlikely Friendship.”

According to Tom Bensman of the Native American council, there are approximately 1,800 Native Americans in the Miami Valley representing the Wyandotte, Miami, Delaware, Potawatomi, Iroquois, Shawnee, Ottawa and other tribes. Jones has long had a vision for an indigenous studies program for Native Americans in the area, which recently led to discussions with others, including his cousin Chief Looking Horse and Yellow Springs resident Randy Allen, to get something started. Within days of that group’s brainstorm this spring, Bedard had said a prayer of her own, and through a common connection to Allen, they all came together to begin planning the chautauqua.

The Dayton area has always been a place for trading and peace talks at the intersection of the five rivers, the Great Miami, Mad and Stillwater rivers and the Wolf and Twin creeks, Bensman said. So the location of the chautauqua makes sense, as well as the timing at a period when people are more aware of the injustices that the industrial society has committed, but have yet to repair the damage. Even a witnessing of the stories of the past could allow some healing, he said.

“There’s this whole element of just speaking the truth — maybe if you just say we are here,” people will give support where there is need, he said.

Efforts toward reparations have occurred on a private or small scale, including the return of property to native tribes in Maine and Indianapolis and some truth and reconciliation in Canada, Bedard said. But nothing official has ever been approved. And it’s not just the Native Americans who are hurting, she said. There are 400 million indigenous people around the world with very similar experiences of colonization and forced cultural assimilation. But we all came from some kind of tribe, she said, with its own language and culture. It has only been since the industrial revolution began a hyper focus on science, dissection and “covering the earth with pavement,” that we’ve become so separate from one another.

“We’ve gone through analysis,” Bensman said. “It’s time to get back to synthesis.”

The Five Rivers event is inviting special guests from South Dakota — a group of Oglala Lakota youth from the Pine Ridge Reservation. Because of the devastating statistics on alcoholism and suicide at Pine Ridge, Bedard hopes to expose the youth to the positive aspects of their indigenous culture and seed some hope to take back with them. Though space is reserved for a small group in Yellow Springs, Bedard hopes local residents will volunteer as backup hosts in case more youth than expected arrive next week.

If Black Elk, the Lakota elder whose philosophy and vision was recorded by an American writer in the 1932 transcription, “Black Elk Speaks,” foresaw the fall of the Native American way of life, he also predicted a healing and reunion at some point in the future. Bedard quoted a piece of wisdom common to many Native American people that what we do today will affect those seven generations ahead of us. It has been nearly that long since the Battle at Wounded Knee near Pine Ridge in 1890 marked the end of the western frontier. It is time to mend that sacred hoop of humanity that was broken so long ago, Bensman said.

“To mend the sacred hoop is to acknowledge that we are all equal when we stand together in a circle as one,” he said.

“To me ‘mending the sacred hoop’ is about restoring right relationships between human beings, as well as between humans and the rest of our natural and sacred world. In a culture where divisions separate those of different race, religion, gender and socio-economoic status from one another, we all need to come together to sit in a circle where each unique individual is honored as sacred equals,” he wrote in an email this week. “At the level of the heart all beings have the desire to express and receive love. Let that energy be the healing force that mends this sacred hoop of life for all those who have gone before us, for those who are here now, and for the seven generations to come.”

For more information and the full schedule of chautauqua events, go to http://www.fiveriverschautauqua.org/. To volunteer to host a small youth group, email sleepingladyfilms@gmail.com.