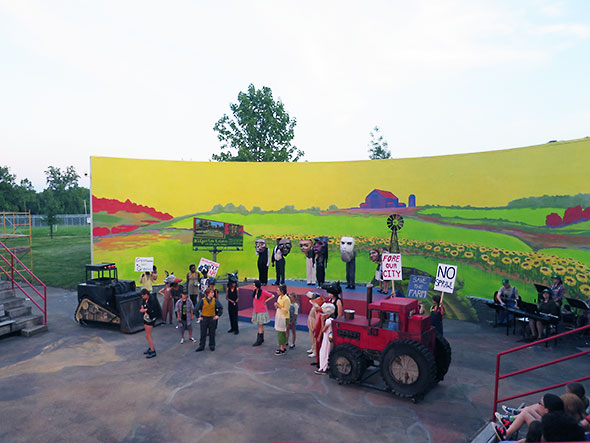 Thursday night, the Yellow Springs Kids Playhouse production of The Farm opened under clear skies and the weight of high expectation. A musical colorfully cast with 35 precocious kids costumed in reconstructed recyclables is—according to one of YSKP’s tongue twisters—“a thing that’s simply hard to say and harder still to do”. 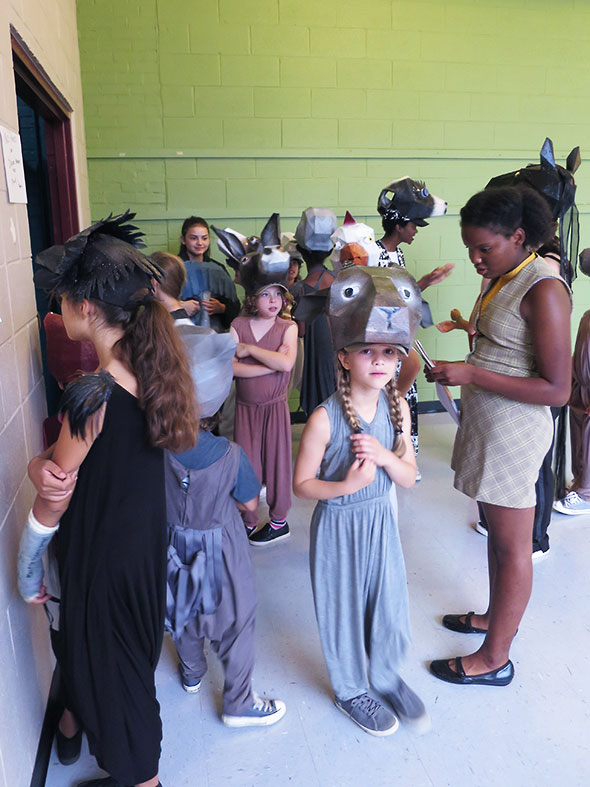 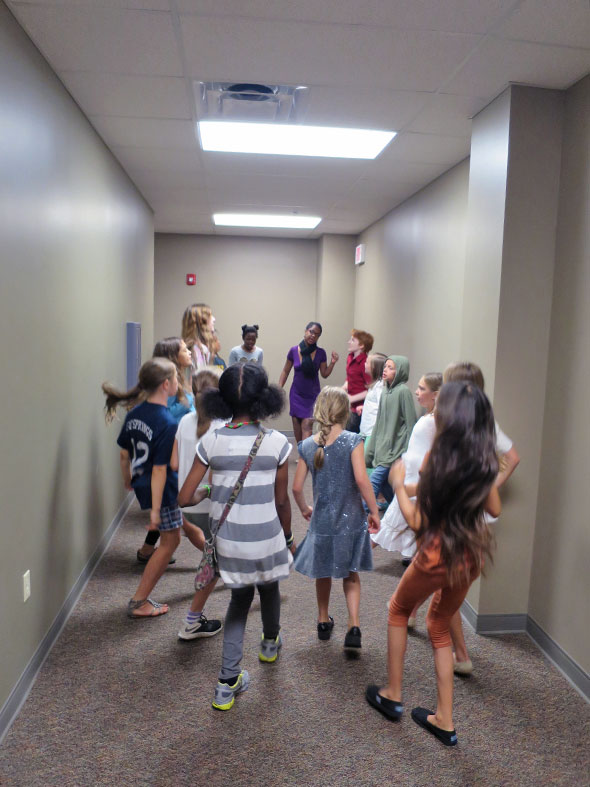 In preparation of eight performances—four this weekend and another four next weekend starting Thursday, Friday, Saturday, and Sunday 7:30pm—the production has been building at a fine cadence “a ratata ratata ratata tat” first in rehearsal at Antioch Midwest University and then full length production within the theatre spaces of Antioch College. 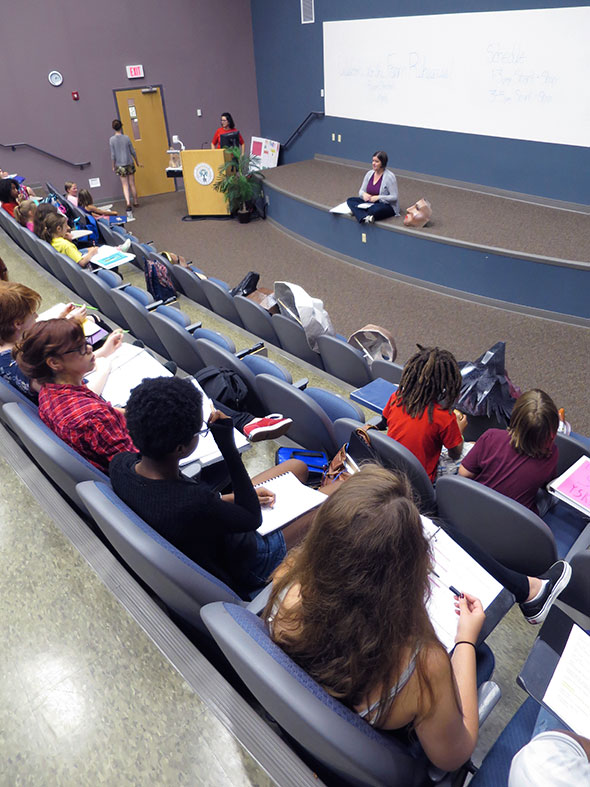 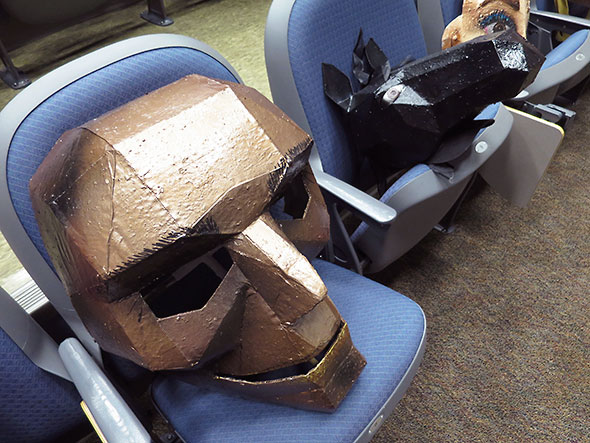 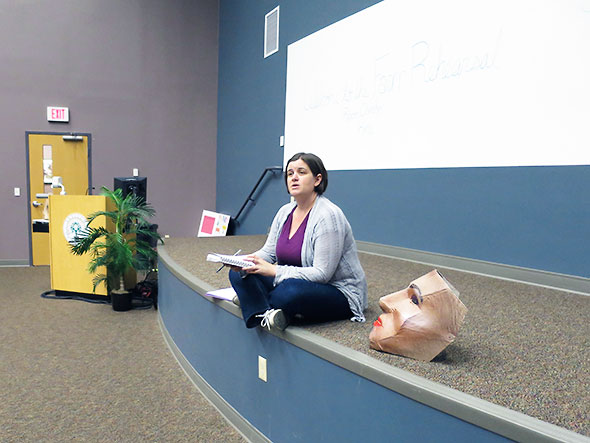 The play tells the tale of an organic farm just outside of the fictional town of Hilgerton Ohio. The animals in residence have their fur and feathers in a terrible ruffle after town squirrels send word of a plot set in motion by greedy land developers. Pinstriped and polka dotted poachers envision big city sprawl overtop the small green-belted town. Aware that the proposed land development means exile for all, the farm animals and wildlife—normally at odds with each other—join forces to save their home. Their characters, based on George Owell’s Animal Farm, are a more enlightened flock of souls than the ones Orwell reared. Pigs are notably absent. The play marches forward to its final confrontation of bulldozer versus tractor on impetus of animal lore and loyalty. 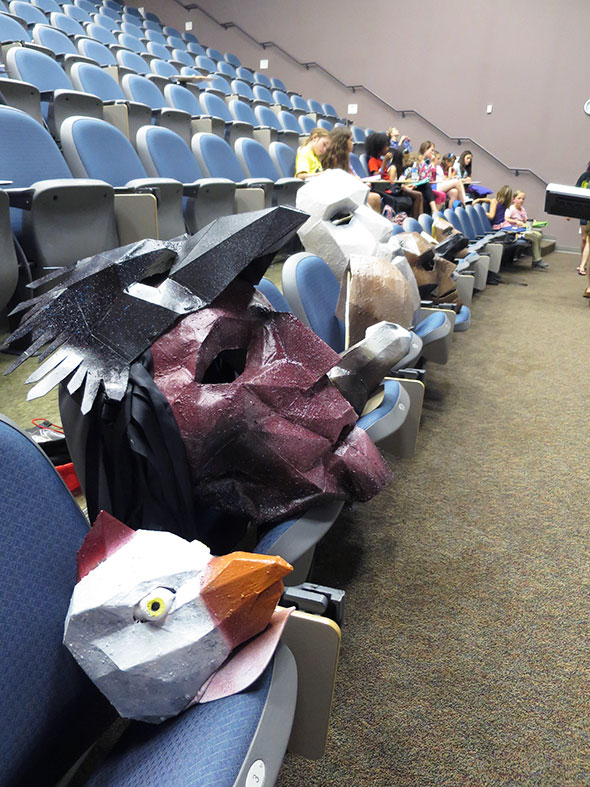 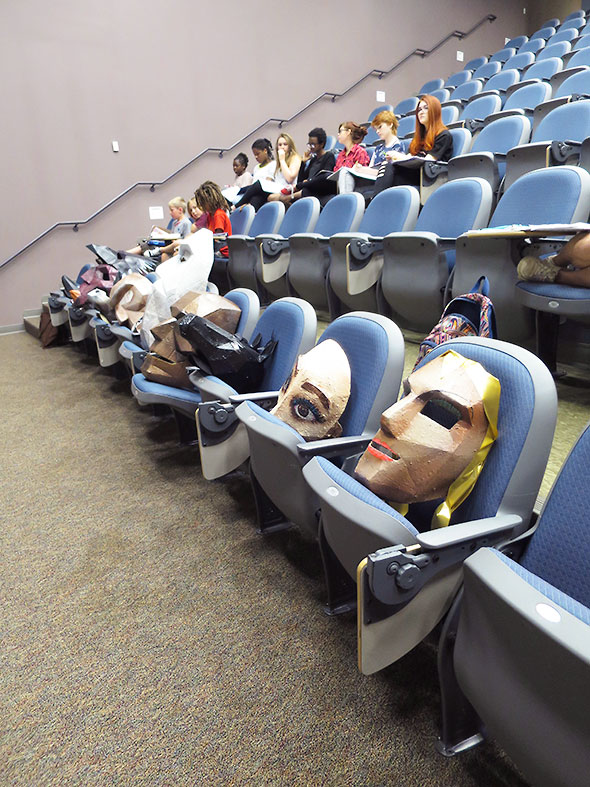 The Farm, a two act play written by Joan Sand, has a growning season’s share of drama. Conflict abounds in the fields: feed versus forage, profit versus purpose, young versus old, and most significantly the inner struggle of a man who must resolve his love/hate relationship with the land. 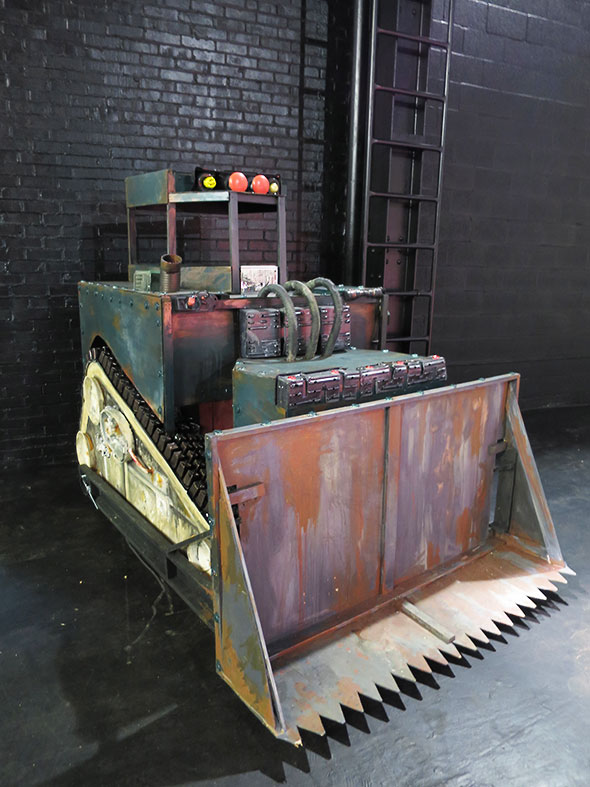 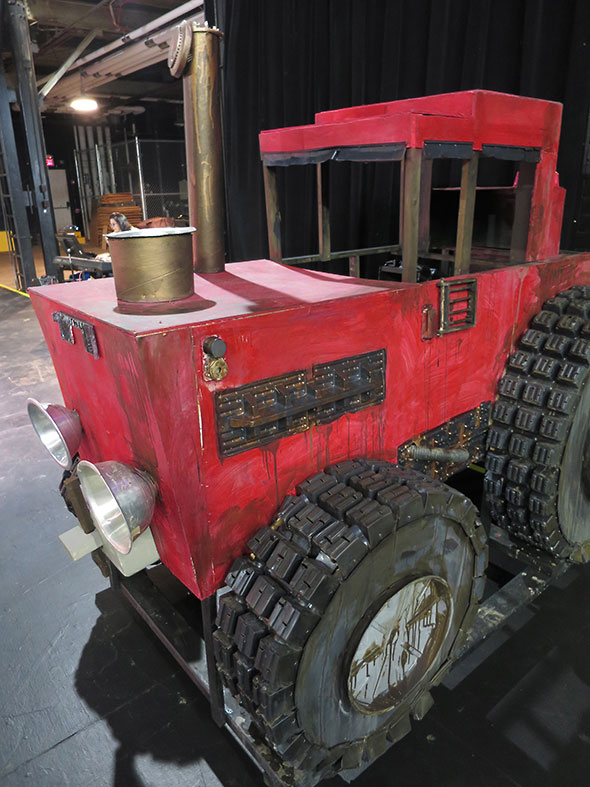 The play’s human drama draws from the story of the Whitehall Farm auction. The Whitehall Farm is currently the headquarters of the Tecumseh Land Trust, a local nonprofit organizing conservation of farmland, water ways, and other natural areas. The property was in private hands when, in the winter of 1999, its heirs put the farm’s 940 acres on the auction block. Little more than a month separated the auction from its public announcement. In that time, the Tecumseh Land Trust led the community effort to raise money for a conservation easement. The plan was for the land trust to go to the auction prepared to team with bidders who would put the easement on the land and protect it from development. In six weeks, local residents, governments, and businesses chipped in $1.2 million toward the easement. I lived in town when this dramatic event unfolded and joined the cause to “Save The Farm”. The day of the auction arrived, and I stood with other demonstrators by six foot letters reading NO SPRAWL on an embankment outside the auction hall waiting for news of the farm’s fate. When news came, we greeted it with most welcome relief. Local residents Dave and Sharen Neuhardt had come prepared to buy a few acres surrounding their home but saw from the way the land was parceled for auction that they’d have to buy the whole property to achieve that end. They shook hands with the land trust agreeing to put the conservation easement on the land. They also shook hands with Lamar Spracklen, local grain and cattle farmer and conservation activist, who agreed to buy the 300+ acres he was bidding on after the easement went on it. The Neuhardts then bid on the entire whole farm and, as the auction hammer fell in favor of their offer, committed to the preservation its green space for future generations. 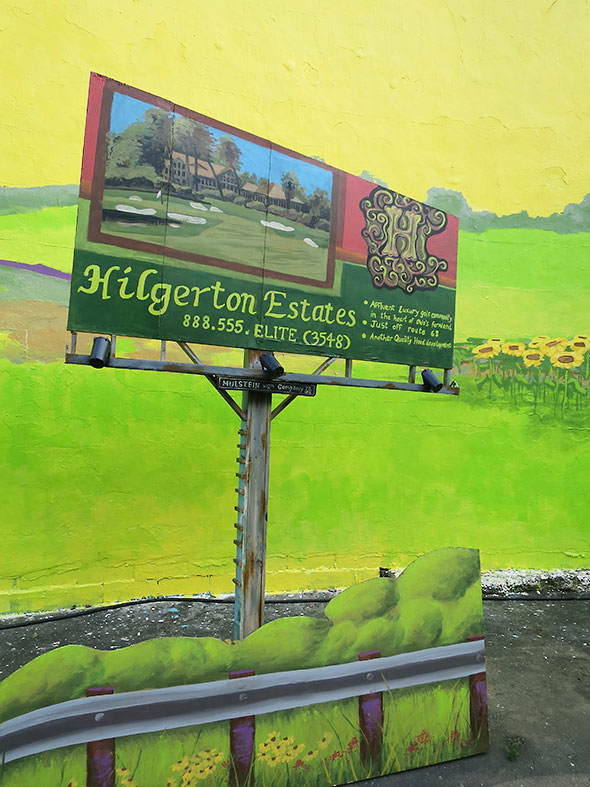 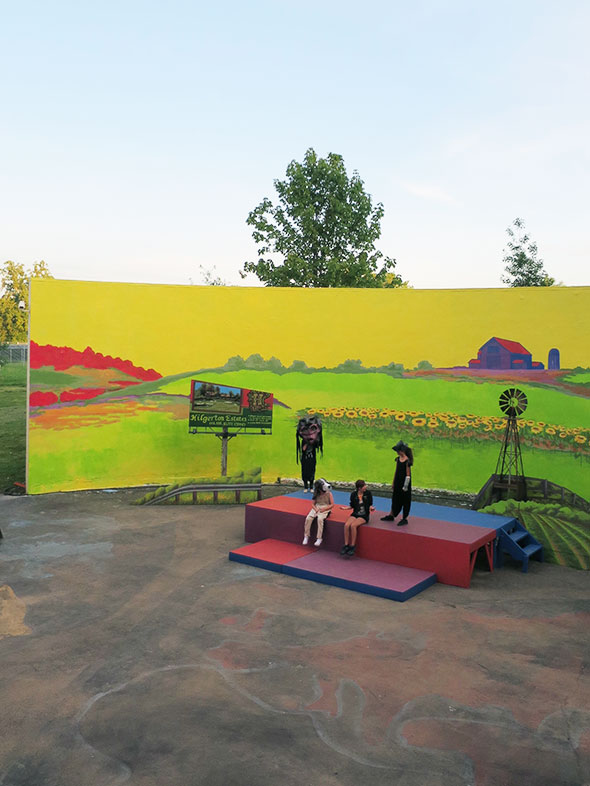 My daughter auditioned for the play in May and joined the cast as one of its youngest members. In the first act, she plays a young goat unsettled at the strange going ons along her other barnyard friends. In the second act, she switches roles and plays an eager patron of the local farmers market and a protester of the threatened development…someone who resembled my thirty year old self but dressed in overalls.

Beal directs a strong cast and crew. The sets pieces are simple but well
thought out. The bulldozer and tractor are made from recycled materials…seed starter trays, aluminum shades, trash can lids, and assorted plastic appliance cases. One tears askew while the other combs the fibers of the land. The assembled costumes are most extraordinary. Materials reflect character. The birds’ flowing drapes and feathers lift and float as crow, goose, hen wing about the stage. The developers and politicians wear slick fabrics brocaded in busy patterns. Continuing the theme of Recycle-Reuse, Ayn Wood and Matt Brown have fashioned an extensive eclectic set of masks and headpieces. Almost every character has one, and the evocative collection are united in texture and theme. Charmingly, they range a fierce spectrum of character from odd soul to endearing silliness. 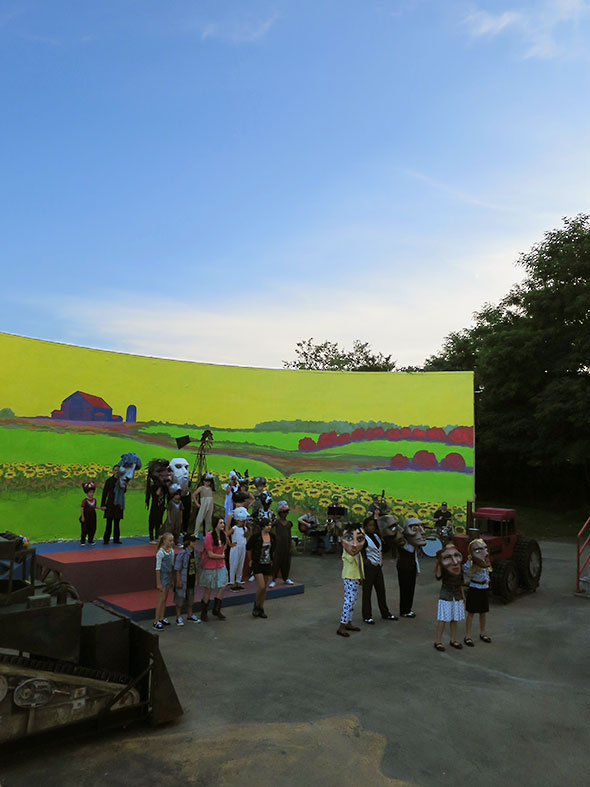 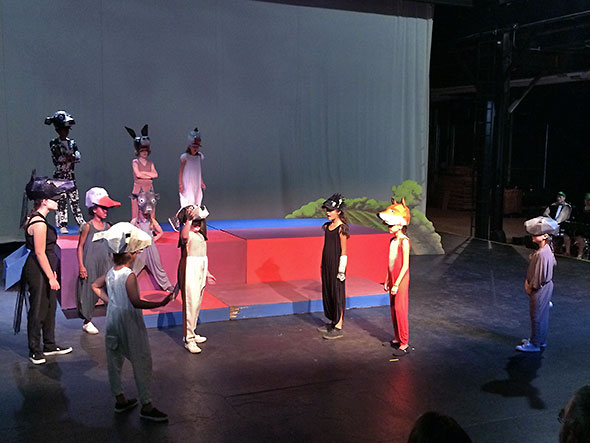 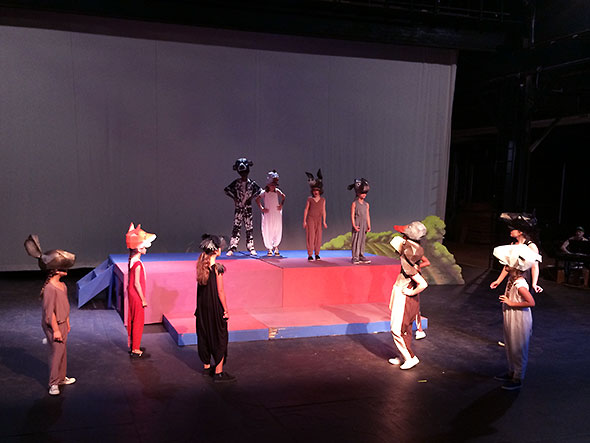 The production met with conflict itself on stormy Friday. Performances take place the Antioch College amphitheater—dressed once again in a stunning panoramic mural by Pierre Nagley and Travis Tarbox—except in case of bad weather when the show will go on inside of the Foundry Theater. Though Thursday night was clear, actors arrived on call to the clap of thunder and the fall of a halting rain. Director Beal had a moment’s doubt bringing the production inside but in the next moment told her cast and crew, “You’ve got this.” Indeed they did. The night’s performance was remarkably tight and natural as the actors took the Foundry Theater stage and made The Farm their own. 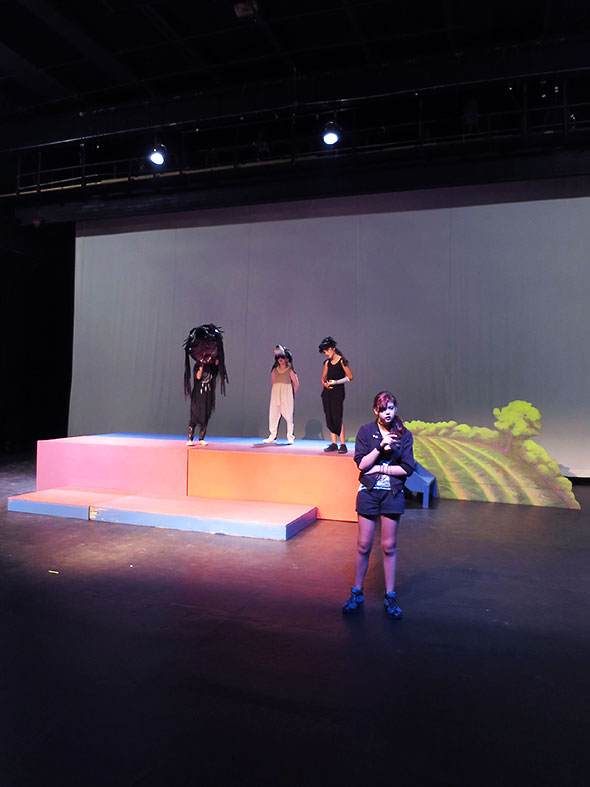 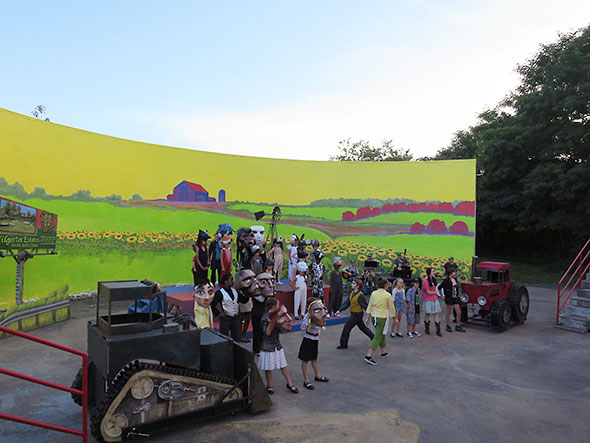 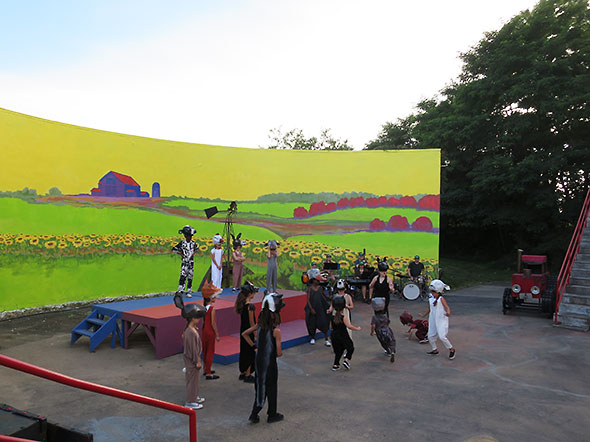 Donations collected during the second act of The Farm benefit the Tecumseh Land Trust. You can donate to YSKP at the box office and by partaking of the concession stands at intermission. Hold off on dinner before you arrive for the show as Sunrise Cafe is offering chicken dinner and a bean plate in addition to slices of pie. Also available at the main concession stand, Three Leee Cupcakery has lovely cupcakes decorated with sunflowers.

If you’d like to take away a memento from The Farm, YSKP t-shirts and water bottles are for sale along with Rural King baseball caps in blue, red, and pink. The members of farm band, lead by Musical Director Barbara Leeds, already have their Rural King caps in John Deer green. 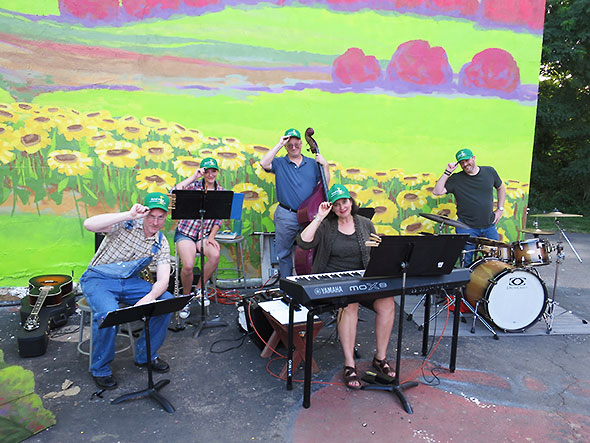 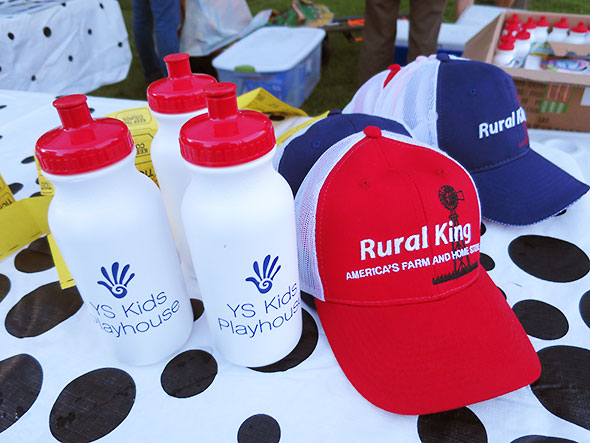 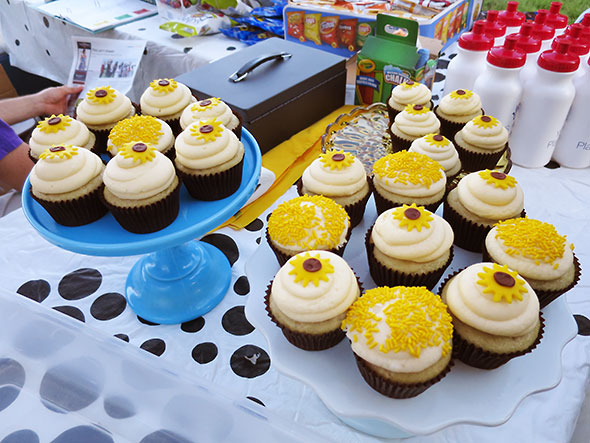 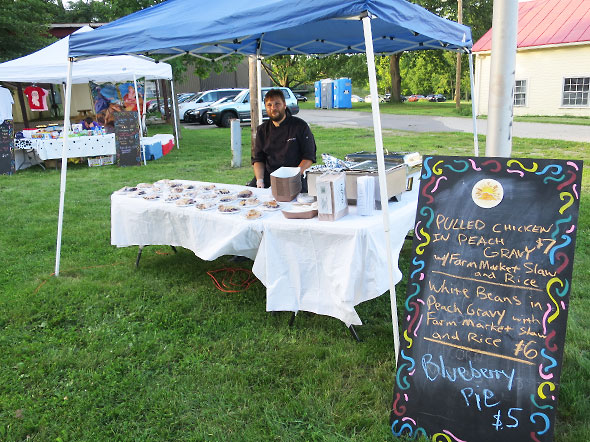 Just behind the south wall mural of the amphitheater, fields that once were a golf course are being transformed to an urban organic farm. That juxtaposition is a special irony not lost on the play’s author and production crew. The play acknowledges the many conflicting opinions on what constitutes natural use of the land and admits to the compromises that we make. The birds and bulldogs that live in the green space of Antioch College have been joining the green-billed farm band in their evening serenade. The native voices joined with the voices of our children hint of the true beauty when harmony is achieved.