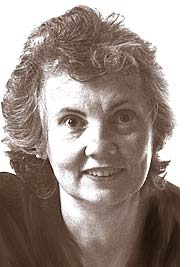 Deborah Ann Dineen died peacefully at her home in Port St. John, Fla., on June 14, 2015, at the age of 67, due to complications from uterine cancer.

Deborah was born on Oct. 16, 1947, in Troy, Ohio. She would excel academically at Wayne High School and go on to dance professionally with the Dayton Ballet Company, and then eventually to teach with the DBC for several years while graduating from Wright State University.

After moving to Yellow Springs, she would eventually open the Yellow Springs Dance Studio, her own dance studio in her home on West Limestone Street that she would teach out of for many years, as well as teaching dance classes at Antioch College.

While in Yellow Springs, Deborah also worked at the First Presbyterian Church during the Rev. Douglas Wilson’s tenure there.

Deborah left Yellow Springs in 1990 to move to Florida with her mother, Ruth Dineen.

After her mother died in 2005, Deborah moved to the peaceful hills of northern Georgia where she enjoyed her retirement, and was in the process of moving back to Florida these last months when she was diagnosed with cancer.

A lifelong student and a teacher throughout her days, she loved to learn and share her knowledge of dance, movement, yoga, kinesiology, muscle therapy, anatomy and physiology, RFT and biofeedback, among many others.

Deborah is survived by her son, Robert Kramer, of Port St. John; and granddaughter, Hannah Rose Kramer, of Palm Bay, Fla. She was preceded in death by her parents, James Bernard Dineen and Ruth Charlotte Dineen of Dayton, Ohio.

In lieu of flowers, to honor her memory, she would just want you all to be nicer and kinder to each other.

One Response to “Deborah Ann Dineen”