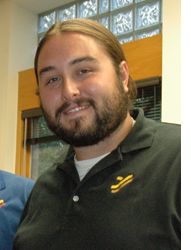 The Village hired Brad Ault as the new superintendent of water and wastewater treatment, Village Manager Patti Bates announced at the Council meeting on Monday, July 20.

Ault, who lives in Xenia, is certified with a Water Treatment I operator’s license and a wastewater treatment II operator’s license through the Ohio Environmental Protection Agency. (The Yellow Springs plants are rated level II in wastewater and I in water, based on size.) He anticipates that his biggest project will be the construction of the Village’s new water plant, slated to begin construction later next year, near the current plant.

“Richard and I were both involved during whole water plant tours, meetings and design process, and we’ll continue to the final stage of construction,” Ault said this week. “I was here throughout construction of the wastewater plant, so I kind of know what to expect.”

Ault replaces Bates, who resigned last month after nine years with the Village to supervise the water plant for the City of Xenia. The Village intends to hire a third plant operator in the coming months.