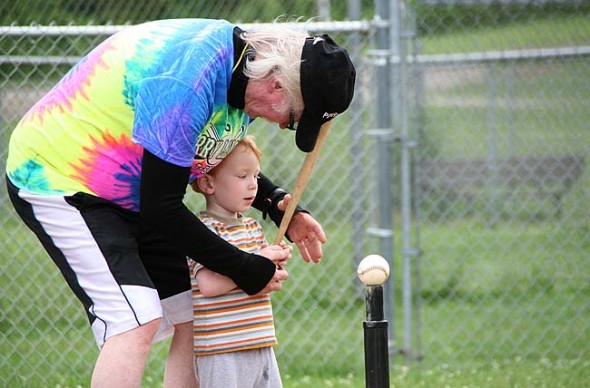 The Perry League T-ball gang has two weeks left of play this summer — this Friday, July 31 at 6:30 p.m. and Friday, Aug. 7, the annual grande finale event, both at Gaunt Park. Shown here at a recent game are Coach Jimmy and Corbin Hyatt. (Photo by Suzanne Szempruch)

The little and big miracles of T-ball

They’re all little miracles. Sometimes big miracles. If you step back and squint your eyes at them, you’ll see. Like John Christian Davis. He’s 5 and simply cannot get enough of the ground balls hit or thrown into the infield. He dashes left, grabs a ball off the ground, never seeming to take his eyes off the field. He’s ever-ready to grab a second ball — he does; he’s got two balls now — and immediately, his eyes shining like light house beacons, he prances, hopping and skipping after a third ball. His energy is so high, his enthusiasm so complete. If you stand close enough, you could warm your hands on the heat and electricity coming off this remarkable boy.

Maggie Bullock, 4, is back with her devoted, super T-ball parent-volunteer coaches, Ben at first gathering every child in, and Elyssa managing the bench, making sure each child gets his or her turns at bat.

“I missed you the last two weeks,” I say to Maggie. She tells me they were “in a beach house.” Yes? “There was an ocean,” she says, her deep dark brown eyes looking past me as she recalls the scene in her head, “a pool, and …” She pauses, worrying this third thing. Then she has it: “And a hot pool.”

How nice, I say, wondering why they would have a heated pool in July at the Outer Banks? “Hot tub,” she clarifies, editing herself.

Sebastian Valdez-Malishenko, 3, is back for his second week with his grandfather, Tucker Malishenko, his mom Myra — who is 22 weeks pregnant, looking radiant and beautiful — and his dad Angel. Sebby, as they call him sometimes, is another of those 3-year-old, perpetual-motion-machine dynamos. He is quick and precise with his bat, fast as a spring rabbit racing around the bases, and like a one-man vacuum cleaner on the field chasing down 67 balls, bringing them all to his lovely family lounging on the edge of the infield, in the left field grass.

It is his first night for two-year-old Riley Sandey. A lefty, he throws the ball with an uncanny confidence. His mom and dad, Lindsay and Brendan, are with him in the field and at bat. “A total player!” mom Char Tom says when Riley hits the ball off the tee, immediately chasing it into the infield. He picks it up himself and then bounds exuberantly, joyfully, over to Coach Ben at first base.

“What’s your name?” I ask the attractive and graceful fellow who has just come to the plate. “Thomas,” he says. “Thomas ‘Innee,’ Thomas ‘Innee.’ You can call me Tommy.”

The next time Thomas is at bat, our on-deck coach, Zac Craig, who is working with his incandescent curly-haired, “almost”-3-year-old son Eliot, brings Thomas up to me and says, “This is T-Dog!”

I turn to the players in the field announcing Thomas: “This is T-Dog! He’s good.”

Myles, 8, and Zoe Siemer, 7, are back, bright, hilarious, a pair of delightfully mischievous and gifted spirits. Sophia Anderson, 7, is back, too, with her two interesting little brothers, Pierce, 4, and Ronan, 4. And there is the wonderful Obedijah Artis, an unstoppable 2-year-old, on the diamond again. He runs-runs-runs, he dashes, dodges, runs, runs, runs; he darts, jumps, hits, catches, and runs-runs-runs; he dashes, darts, and dodges some more. I tell his mom Leah McCullagh that she has won the weekly Outstanding Mother of the T-ball award because she stays with that non-stop maniacal engine of a 2-year-old. Stays with him. Catching him. Guiding him. Grabbing him. Turning him. Stopping him. Diverting him. Protecting him. Loving him.

And that’s our Perry League, Yellow Springs’s T-ball program for all the community’s children ages 2–9 regardless of race, color, or creed, sexual orientation, ethnicity, spiritual inclination, ability or disability. We’re at Gaunt Park every Friday night from 6:30–8 p.m. Children can begin to play at any time and there’s no requirement to play every week. Come when you like, come when you can. We’ll be out there for the next two Friday nights, this week, July 31, and next week, Aug. 7, which will be our final potluck-picnic, trophy-to-every-kid-who-shows-up night. So, why don’t you join us? Sign-up to bring something to our final night picnic. And enjoy, as the Christopher Morley poem about childhood says,

The greatest poem ever known
Is one all poets have outgrown:
The poetry, innate, untold
Of being only four years old.