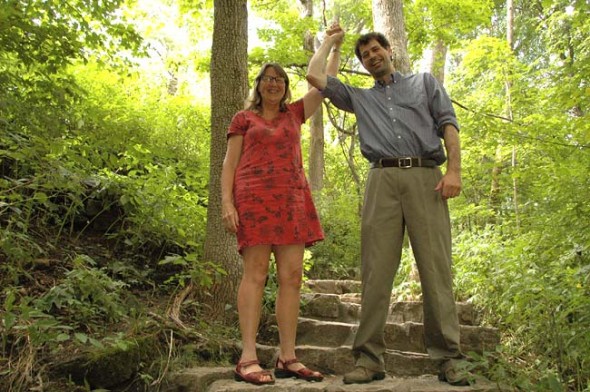 After a nine-year effort, Glen Helen is now officially preserved as forever a green space. A collaboration of federal, state and local agencies assisted in the process of raising funds to purchase conservation easements for the Glen. Shown above are leaders Krista Magaw, executive director of Tecumseh Land Trust, and Glen Director Nick Boutis. (Photo by Matt Minde)

A nine-year effort to protect Glen Helen finally came to a successful conclusion last week, with the Glen now preserved as a wild place into perpetuity.

“There is no greater treasure here than Glen Helen,” Tecumseh Land Trust Executive Director Krista Magaw said in a press release. “It is the ecological and spiritual anchor for our Miami Valley. It’s an honor to do our part to protect it, for today and for our future generations.”

The outcome is especially satisfyng because it was a collaborative effort between a variety of federal, state, regional and local entities that joined together to preserve the Glen, according to Magaw.

“Thanks to everyone for sticking with the process,” she said. “This is a great outcome and something to celebrate.”

A celebration will take place in October, at the Hugh Taylor Birch house in the Glen, on Oct. 25, at a time to be announced.

Altogether, the effort to preserve all 973 acres of the Glen, which took place in several stages, cost a little over $3 million, according to Glen Helen Director Nick Boutis this week.

The funding included $940,650 from the the Clean Ohio Fund; $567,500 from the federal Farm and Ranch Lands Protection Program; $100,000 from the Village of Yellow Springs; $1.2 million from the Ohio EPA’s Water Restoration Resource Sponsorship Program and $200,000 from the Upper River Fund of the Dayton Foundation.

The commitment of Antioch College to the preservation effort was also critical to its success, according to Boutis this week.

“The college didn’t have to make preserving the Glen a priority in its reinvention, but it did,” Boutis said, also thanking the Morgan Family Foundation and Antioch University for their contributions.

“Ultimately, this moved forward because everyone loves the Glen,” Boutis said.

Glen Helen was established in 1929 when college alum Hugh Taylor Birch donated the land to the college in memory of his daughter, Helen Birch Bartlett. At the time College President Arthur Morgan and Birch were concerned about conserving the Glen as green space, according to Boutis, and the deed from Birch included the restriction that the nature preserve be protected.

But the restrictions had no “teeth” according to attorney and TLT board member Dave Neuhardt in 2004, after looking over the historic papers. And indeed the Glen has faced significant threats since it was established, including a state plan in the 1950s to locate a highway through the preserve, which Village and Glen officials managed to beat back.

“That would have destroyed not only the Glen but the fabric of Yellow Springs,” Boutis said.

After Neuhardt’s assessment in 2004 that the Glen was vulnerable, TLT Director Magaw made it her mission to protect the nature preserve, according to TLT member Bob Barcus.

Magaw’s first attempt to preserve the Glen was a 2006 grant request to the Ohio EPA, which just missed being funded. But soon after Boutis, having arrived as the Glen’s new director, also took a major interest in the project. Together, the two in 2008 resubmitted a grant proposal, which was funded in 2009.

But the situation became more complex with the closing of the college in 2008 — officially, the Glen was owned by Antioch University. At a series of meetings of Glen stakeholders, convened by Magaw, it was determined that the best path to conserving the Glen was purchasing the land from the university, placing a conservation easement on it and gifting it to a newly created nonprofit to operate. The nonprofit Trust for Public Land was brought in to assist, according to a TLT document.

The situation changed again with the successful purchase of the college and Glen by an alumni group. The college board held onto the Glen, but also wished to place a conservation easement on the nature preserve to ensure its protection.

The first success of the conservation effort took place in 2013, when areas around the land’s creeks and the Little Miami River were protected by an easement funded by the Ohio EPA grant, along with funds from the Upper River Fund at the Dayton Foundation. The process continued when the Trust for Public Land acquired $1 million from the Clean Ohio Open Space fund to protect remaining areas.

Tecumseh Land Trust succeeded in obtaining about $567,000 from the federal Farm and Ranch Protection Program for areas around the Riding Centre, School Forest and the pine forest. And the final phase of protection, which includes the Outdoor Education and Raptor Centers, was funded by the Clean Ohio Open Space fund.

The protection of the Glen was a long time coming partly due to many delays and staff changes, according to Magaw.

“The many changes in key players at the government agencies certainly slowed the process,” she stated.

In the end, the almost $3 million proceeds from the Glen easements went into two endowments at the Dayton Foundation, which will benefit Glen operations. Tecumseh Land Trust received $50,000 for its stewardship efforts and to fund its job of maintaining the easements each year.

And while final papers were signed several weeks ago, the process didn’t conclude until last Friday, Aug. 7, when the easements and other official documents were delivered and recorded at the office of the Greene County Recorder.

While the process was long, complicated and often frustrating, the end result of preserving Glen Helen is definitely worth it, Magaw and Boutis agree. And those who made small contributions, such as membership in TLT, also played a significant part in protecting the Glen.

“Member contributions allowed TLT to hire staff and made it possible for staff and volunteers to complete this huge project over nearly nine years,” Magaw said. “Thanks to our members and our community for your investment in saving the place we love.”