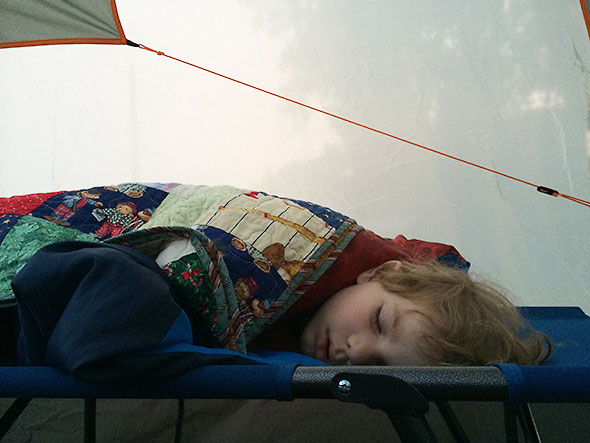 How long I have waited…to affirm this one simple truth. For years, decades in fact, the art and discipline of pitching a tent, building a fire, and settling under a cloud of stars dimmed as a practiced science, a shining bright passion requited only in memory.

My father took us camping. Every summer vacation, Tom would drive us about the waterways of New York State: Erie and Ontario, Buttermilk Falls, Walkins Glen, Thousand Islands, the Finger Lakes, the Susquehanna and the Mohawk. He’d secure mess tents and trailers, pop up campers and boats, and off we’d go into the woods. I remember his trusty propane Coleman Lantern with its webbed mantle that would hiss and undulate when lit. We’d build bonfires starting from rolled up sheets of newspaper and break into a package of Keebler fudge stripe cookies to sandwich our marshmallows for s’mores. 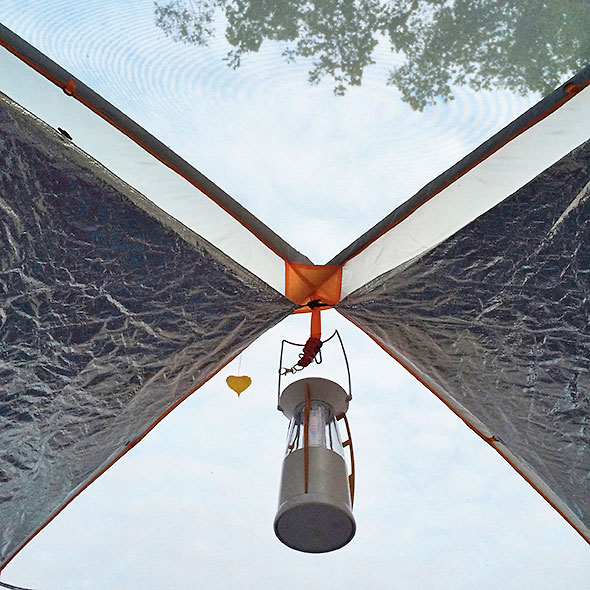 Through these early adventures, I learned a love for the feathery touch of tent netting, the bright tink of metal rods as they tumbled from their storage sleeves, the hot pop of campfire kindling as it catches fire. The thought of camping evokes the appealing odor of pine and the playful dance of blue flame with indigo, red, and orange. Longing for the outdoors early and often, I joined the Campfire Girls as a Blue Bird then switched to Girl Scouts as a Junior so I could maximize time spent in a tent. A favorite week from my college years was the week of survival training that I got from the Air Force. I was so pleased—jumping-up-and-down excited—with my lessons in fire starting, dead reckoning, and the curing of beef jerky that my Colonel put his hand firmly on my shoulder and sternly told me to curb my enthusiasm. When I was stationed in Los Angeles, I was taken in by a group of long-time Sierra Club members, and together we hiked and overnighted through the national parks of Southern California. 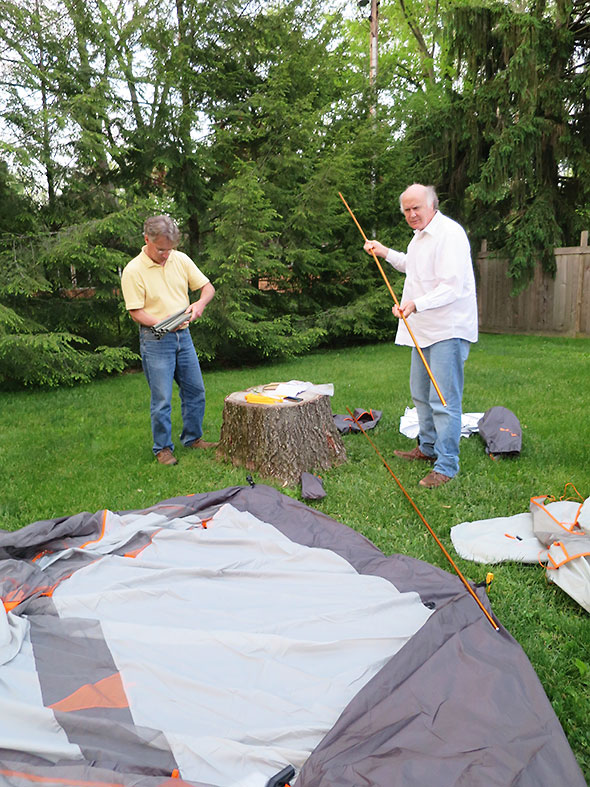 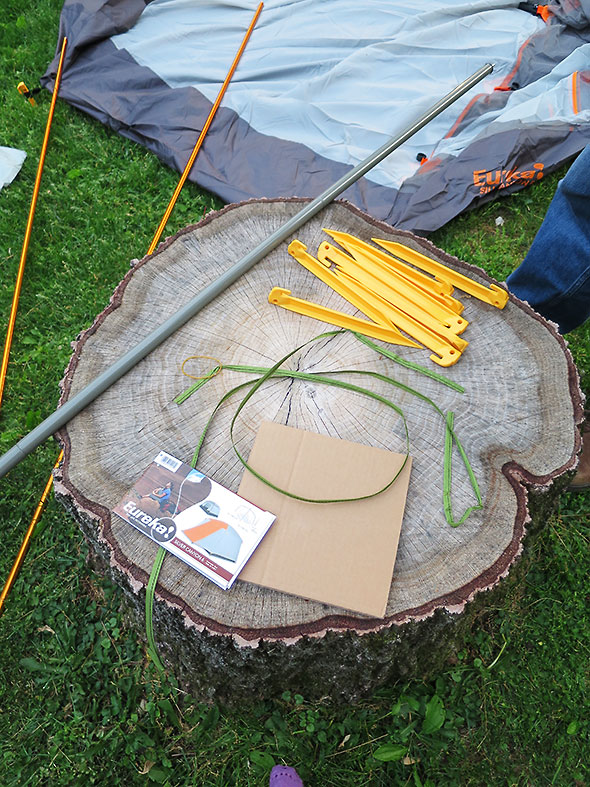 When I moved to Ohio, I developed an interest in bike packing but never fell in with a group like my Sierra Club buddies. I’m not one to camp alone. Camping trips, therefore, became rare events, and rarer still when I met Jeremy. I have a lot to respect and very little to complain about in the handsome young physicist/guitar player who would eventually become my husband but, alas, he was no camper. He suffered from hay fever. Spending a considerable amount of time outside in the summer months was just not going to happen in his company. After we got married, he humored me a couple of times pitching my pup tent the backyard of our Virginia rental. He’d even join me for a few hours before crying “Uncle!” and slipping back inside to civilization, comforter, and air conditioned ease. I quickly surmised that I would have to wait until children—and for the little ones to come of scouting age—before I could reestablish my outdoorsiness and venture off to explore our side of the mountain. 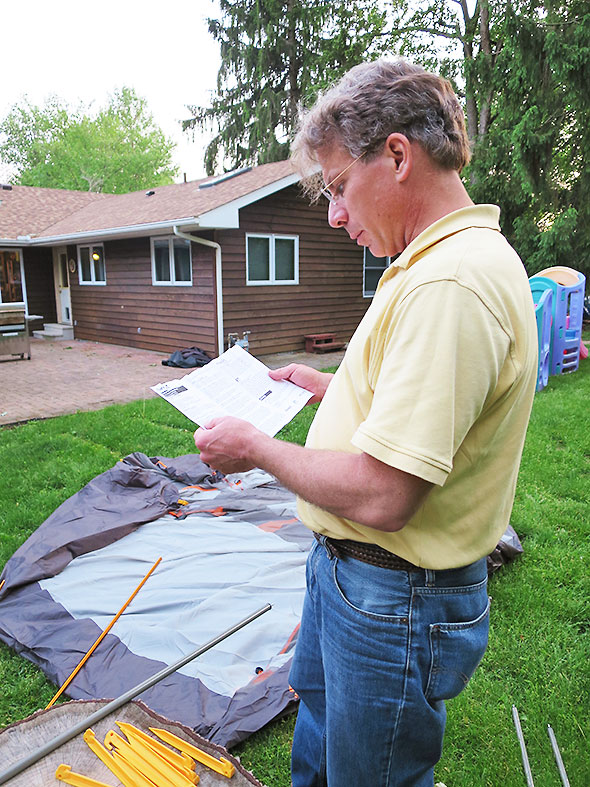 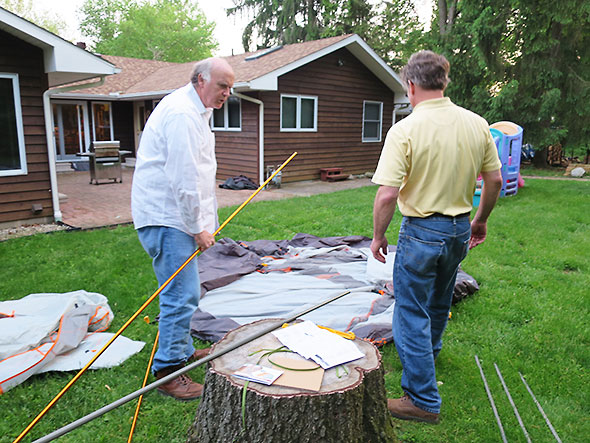 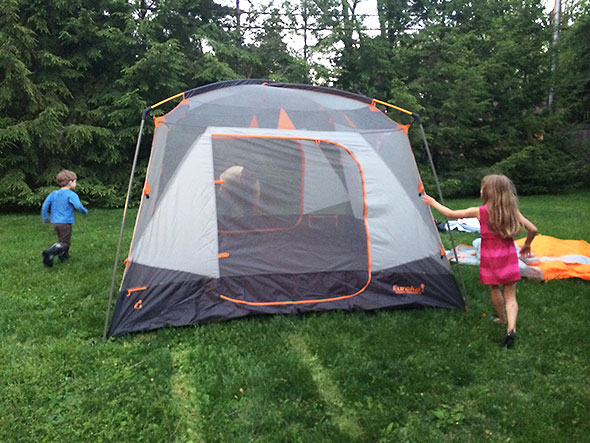 This summer, that moment quite suddenly arrived. My daughter came of camping age. She announced that we most certainly were going to Tar Hollow Camporee as a family and that she expected us to tent camp. Her father did not argue with her. After years of tweaking formulas, his allergy medications have checked his hay fever and he seemed ready and willing—not merely docile—in approving the plan. Pressing the advantage, I drove the family to REI to take advantage of my lifetime membership with the outdoor outfitter. Hearing that the weather forecast called for rain, we selected four cots and a six person tent to keep us high and dry for the duration of the weekend. 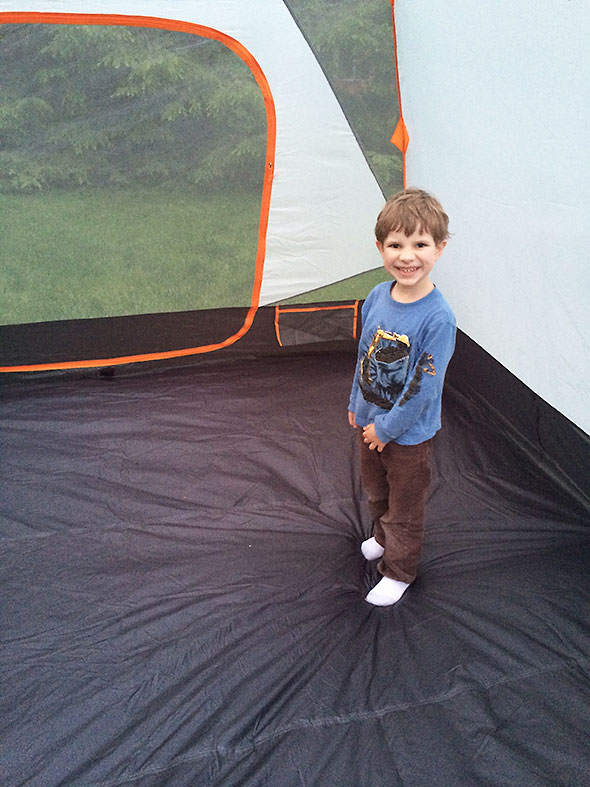 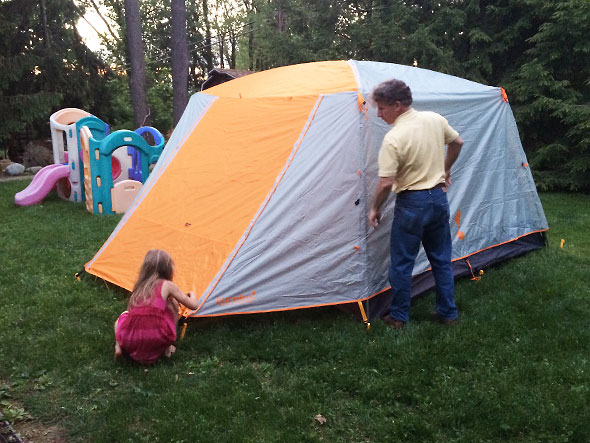 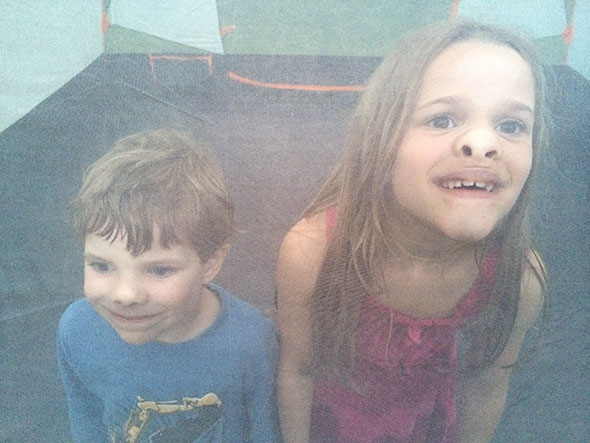 When we got home, Jeremy and the children took out the tent and, with our friend Alan, stood it up in the waning hours of the evening. The base tent has a mesh covered top so that, in fair weather, it looks up to the sky. A rain fly covers the tent in a full second layer. Looking at the full assembly, we felt prepared for a soaker. 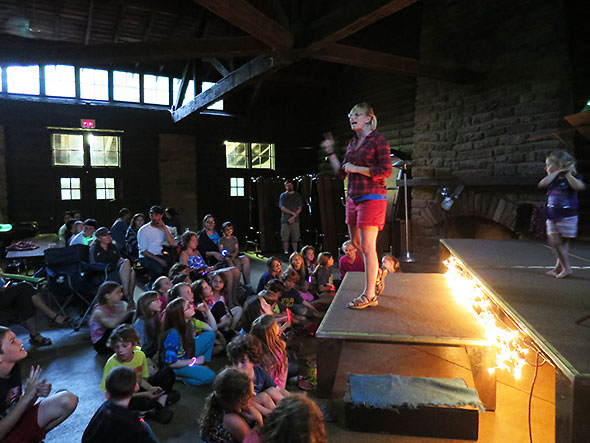 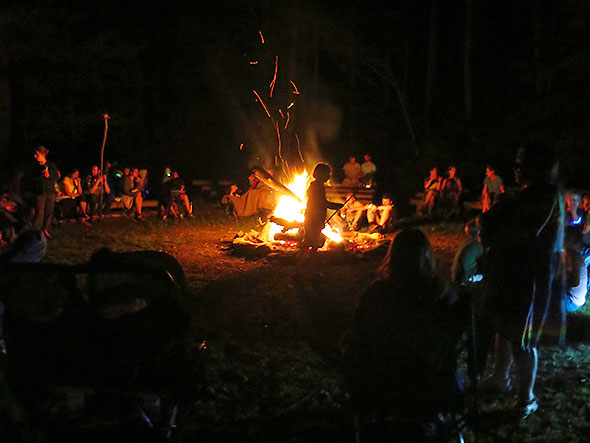 Intermittent rain did fall over the weekend with the camporee but, since we were prepared and no lightening storms materialized, we had a fine time in the Hollow with our friends. We found our names listed among the tent people and for me felt like a “Welcome home, kid”. As we packed up our gear that weekend, I lamented over whether the tent would make its way out of its storage bag until the next year’s visit to Tar Hollow. I’m happy to report however that we’ve used the tent three more times since that first outing. 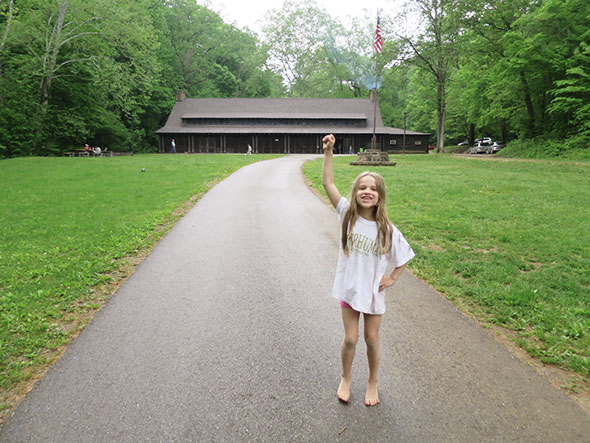 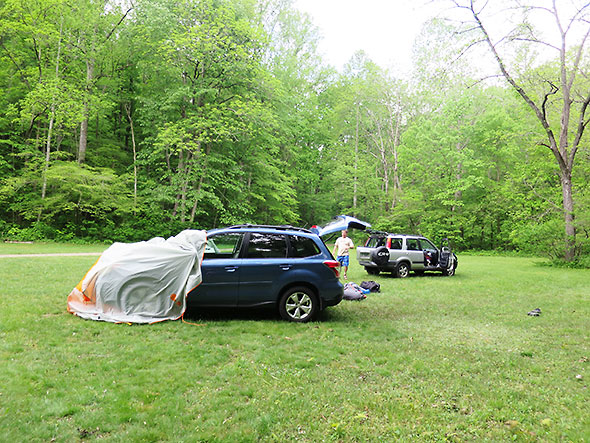 Our fourth outing was just last weekend on the shores of Lake Erie. We visited Sara’s Campground on the recommendations of a Yellow Springs family. Located at the border of Presque Isle State Park, the campground has several closely quartered camp sites on a beach of Lake Erie. The water is the best part of the location and the bed of the beach is strewn with flat rocks, the size and shape of an open palm and perfect for skipping across the water that gently laps at the beach. 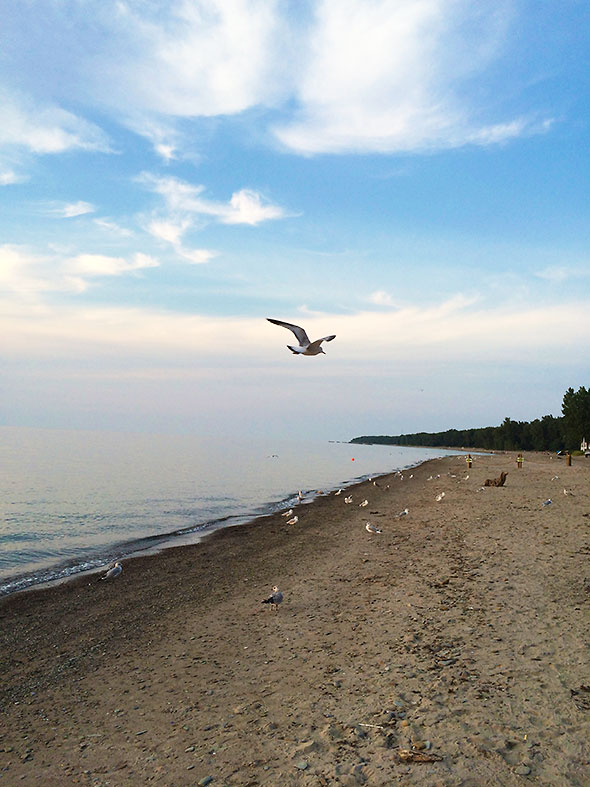 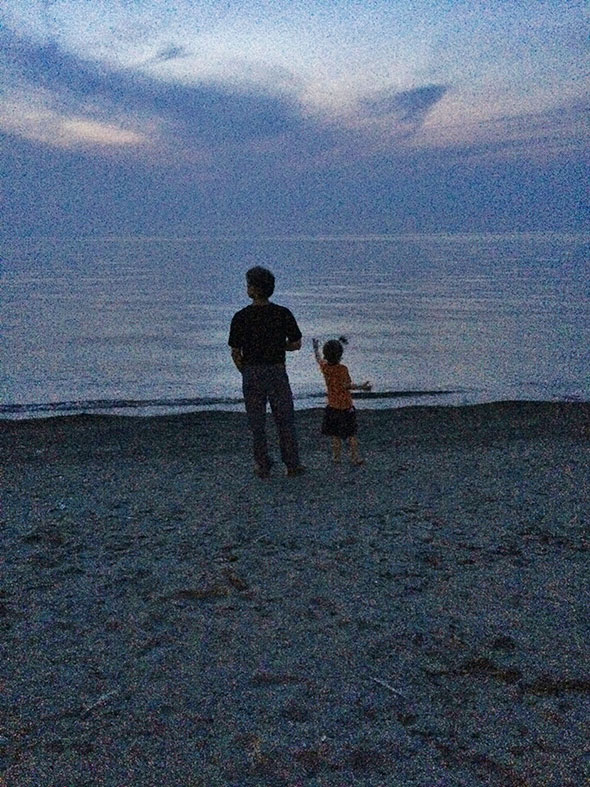 We set up our tent and bought a load of firewood and a bag of marshmallows to make the most of our evening at the water’s edge. After skipping stones with our son and the collection of children gathered impromptly at the beach, I built our fire in the round metal rings that the campground provides. Fire starting succeeds on three elements: Combustable Surface Area, Ventilation, and Intense Heat. Uncongested respiration and multiple pockets of fuel-fed heat keeps fire alive. We stacked the fire ring on top of a bed of flat stones making sure that there were air gaps. The wood was precut in various sizes and included a firestick that would catch like a match and remain lit for several minutes. At first, I felt the survival expert getting the fire going in less than five minutes with the firestick teepees by smaller bits of wood. Unfortunately, ten minutes after strike, the fire suddenly sounded a great crack like a firework and blew itself out. We had burned through the smaller wood pieces, but the larger wood did not catch flame, only smoke and sizzling steam. We came to the conclusion that the wood was still damp from rain earlier in the week, so we spent several minutes trying to shave off splinters from the rough cut wood for a pile of kindling. 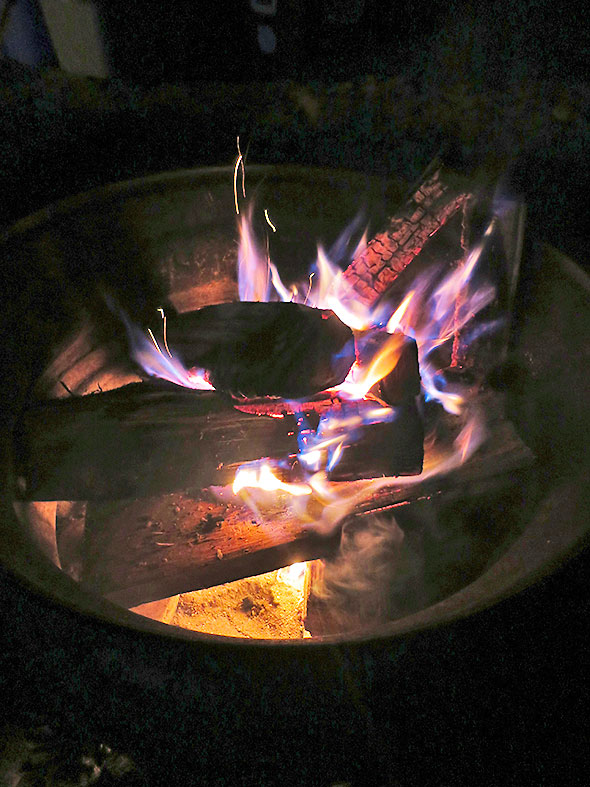 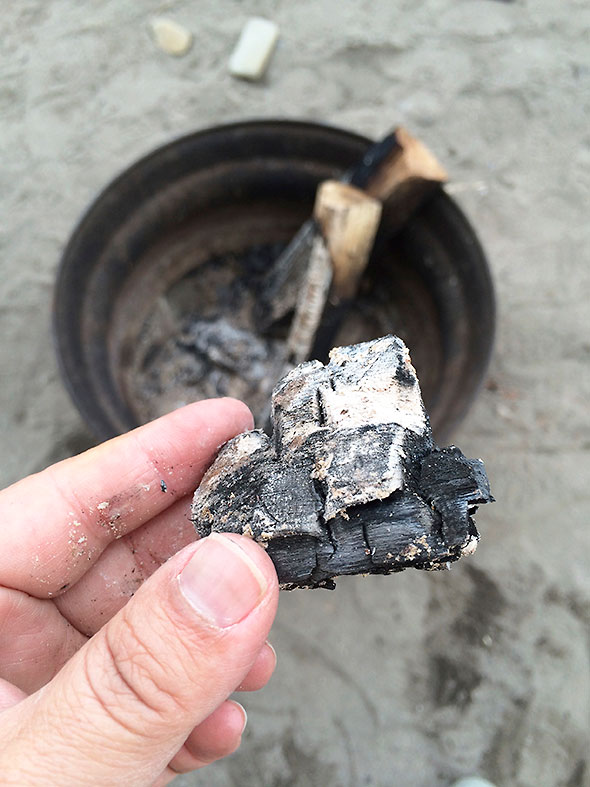 A neighbor handed us a stack of dry wooden blocks and wished us luck. I struggled to contain a hot enough flame that would sustain long enough to be built up. My husband tsked tsked over me saying I should use a teepee arrangement of kindling instead of the lean-to design that my survival training instructors taught me in 1987. I wished aloud for a stock of tried and true kindling: dry pine needles or a vaseline soaked cotton ball. Jeremy scavenged up four quarters and bought the Friday paper of the Erie Times from the camp store’s newspaper rack so we could sustain a hot source over a sufficient amount of surface area. We fed the fire with incendiary editorials and sports team commentary, and soon we were eating marshmallows toasted over a roaring fire. 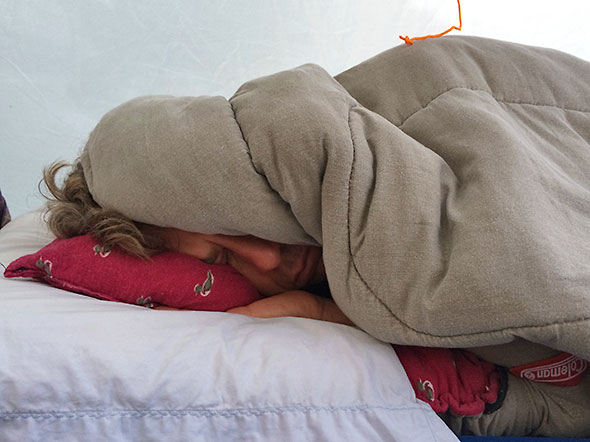 We went to bed that night under a clear sky. No rain threatened so we left off the tent’s rain fly. I awoke at dawn to the sound of light snoring and popped outside to reassert my fire-starting skills. The morning was damp and the sand dark with moisture. A fire would be a pleasant thing to wake up to but I had three wet logs, a collection of damp paper, and a depleted set of matches to get the fire going. Setting the damp paper on fire only produced a cloud of white smoke and a curl of red flame around the newsprint edges. I cleared out the fire circle and searched its base for warm coals. I found a couple of pieces of wood not quite spent from the night before. One piece was sizable: 6 x 5 x 1 inches in dimensions. Along its longest dimension, the piece was warm charcoal-black coal on one end, unspent wood on the other. This find lit like a match; it burned long and hot enough to light dry sections of the Saturday paper that I pulled from the camp store’s newspaper rack. I formed our three damp logs at first in a teepee until they caught fire and then set them down into a stable lean-to. 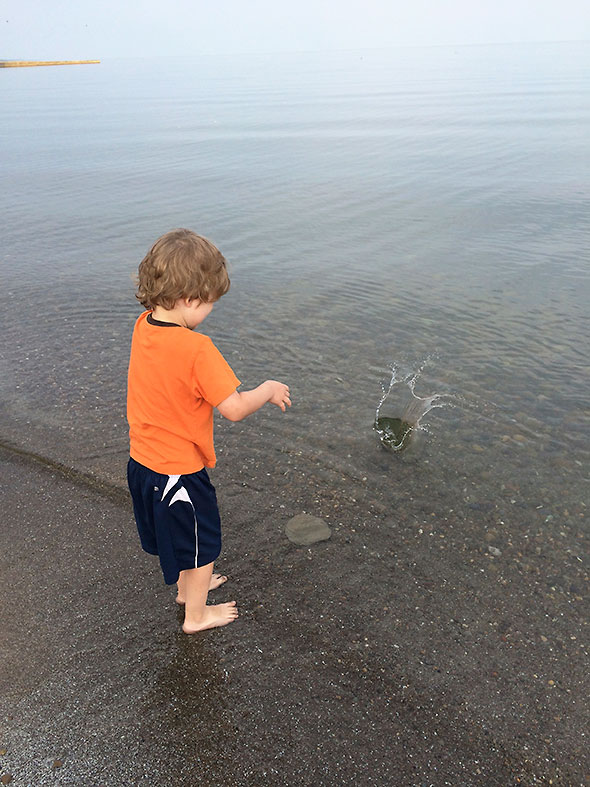 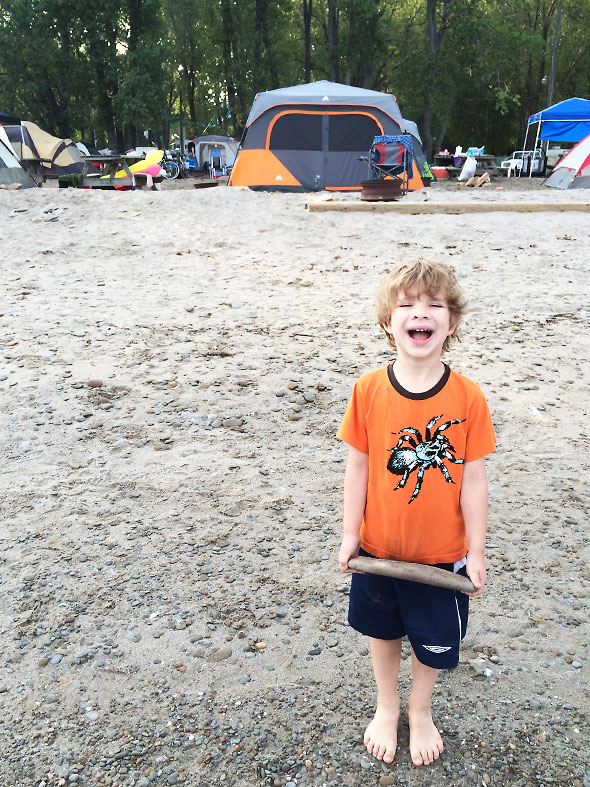 Our morning fire burned down one of the three logs as we broke camp. It snapped off like a light as we folded our camp chairs, the last of our gear. We stuck around at Sara’s Campground long enough to play in the water, building moats and skipping stones with the other visiting kids. As we took leave, I passed off the two partially singed logs to our helpful neighbors along with our great thanks. Then, we made way to our next campsite, pitching the tent for Saturday night, this time on the grassy lawn of my mother’s backyard. 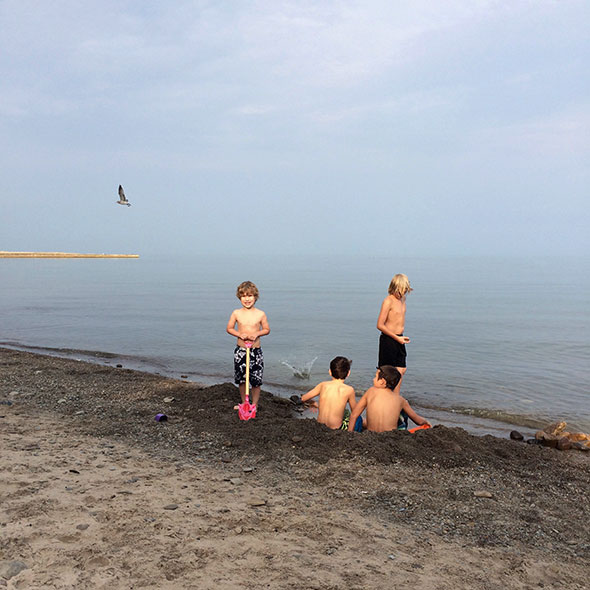 As we drove home on Sunday, my husband declared the camping trip as a resounding success. And, I reassessed my husband—on this, the 12th anniversary of our marriage—and his uncanny worthiness as mate.