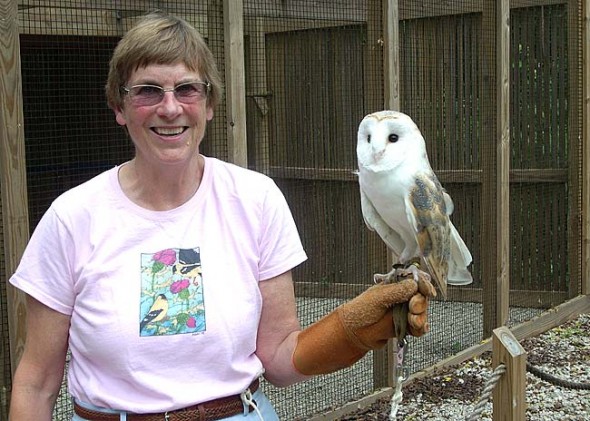 Betty Ross with one of the Raptor Center’s permanent residents, a barn owl named Louie. Barn owls are not native to Ohio, but moved in after the forests were cleared for farming. After nearly 30 years as the Raptor Center’s director, Ross retired last month. (Photo by Audrey Hackett)

A conservative estimate of the number of birds Betty Ross has handled in her nearly 30 years at the Raptor Center might be 4,500. From the tiny saw-whet owl to the powerfully built bald eagle, generations of raptors — birds of prey — have passed through her capable and compassionate hands.

Ross, known as Bet to many in Yellow Springs (the single brisk syllable suits her), began at the Raptor Center in 1986 as a naturalist intern. Most interns are college-aged, but Ross was older — she’d already had two careers, she said in a recent interview, as an elementary school teacher and a sales and marketing specialist. She and her former husband moved to Yellow Springs in the 1980s. Seeking recertification as a teacher, Ross came into contact with Glen Helen’s Outdoor Education Center. “I thought, ‘I’ll just have to become the oldest intern,’” she recalled, laughing.

Villager Joan Horn was the OEC’s director then. She and Ross have remained close friends. “I really appreciated the life experience Bet brought,” said Horn. At the same time, she added, “Bet seems so thoroughly at home with people considerably younger than she.”

Ross’s internship grew into a half-time position, which quickly became a full-time directorship of a modest rehabilitation and education center that was still on the fringes of Glen Helen’s mission. “She took this small thing happening on the side and made it into a big cornerstone of the Glen,” said Rebecca Jaramillo, who just last month took over from Ross as the Raptor Center’s new director.

“The idea of retirement is very traumatic to me,” she said. “This hasn’t been a job — it’s been a life.” Now 70, she’d like to involve herself in other community organizations and do a bit more traveling “before I’m old and tired,” she laughed. But she plans to keep a hand — a skilled and steady one — in the Raptor Center’s work. Jaramillo welcomes Ross’s continued involvement. “Bet is just so knowledgeable,” she said. “I know we’ll be collaborating for a long time.”

Ross has seen enormous changes over the past three decades. Some species, like the bald eagle, have come back from near-extinction in Ohio. “When I started, there were less than 10 nesting pairs in the whole state,” said Ross. “Now there are over 200 nesting pairs.” There’s been a rising tide of public interest in and concern for the welfare of raptors, she noted. “In many ways, we have such a positive story to tell.”

Peregrine falcons, which can now be found nesting on high buildings in downtown Dayton and Columbus, are also thriving. But grassland species, like the beautiful white barn owl once common across Ohio, are under threat. “Their habitat is disappearing,” explained Ross.

Education and public outreach have been a large part of her work. She takes birds on the road (or did before a recent state ban on bird exhibits) to visit schools, senior centers, libraries and other sites.

“I don’t have to do much to get people’s attention,” she said. “I just pull out a bird and I’ve got it!” School classes and other groups also come to the Raptor Center to see the birds and learn about their habitats, adaptations and individual stories.

The raptors used in educational programs are the Center’s “permanent residents,” explained Ross. They’re healthy, but too disabled to live on their own in the wild. These residents, all of whom have names, live for years, even decades, at the Center. They represent the array of raptor species found in Ohio, said Ross. Some, like the Arctic-dwelling rough-legged hawk, ordinarily live here for just a few months in winter; others, like the screech owl heard around the neighborhoods of Yellow Springs, are full-time Buckeyes.

“I see them as ambassadors for all living things,” said Ross. “Yes, they’re beautiful birds, but they represent all wildlife.” Ross and her “ambassadors” carry a message of conservation and respect. “And success,” she said. “It’s so important for people to know there are things we can do — that kids’ efforts and all our efforts matter.”

There was a time, said Ross, when rehabilitation was viewed skeptically in the wildlife community.

“The feeling was, our work should be about populations, not individuals.” But that’s changed. “I see what we do as helpful to the individual birds, of course, but also helpful to educating people about them. Every act of rehabilitation is a chance to educate someone,” she said.

That education has made a powerful difference, said Glen Helen’s director, Nick Boutis. He cited three ways in which the Raptor Center, under Ross’s leadership, has benefited wildlife and the Glen.

“The public view on wildlife has shifted, the health of wildlife populations has shifted and the Glen has made connections with people we otherwise would never know,” he said. “We have a national reputation for wildlife rehabilitation, and that owes a lot to Bet.”

In addition to leading thousands of programs over the years, Ross helped found the Ohio Wildlife Rehabilitators Association, a group she headed for 20 years. Though she’s one of the most visible faces of raptor rehabilitation in the state, much of her work happens behind the scenes.

“Her most amazing accomplishments are not necessarily the ones that are witnessed by anyone,” said Boutis. “When it’s minus-10 degrees and 10 inches of snow, she’s there, even if she has to chip ice away from the doors to care for the birds.”

A call for help can come at any time, said Ross. “I don’t get a lot of 2 a.m. calls, but I do get some.” Everyone from park rangers to ordinary citizens might contact Ross to say, “I found a bird.” Sometimes the birds are genuinely in need of medical attention; other times, “a well-meaning person has actually kidnapped a bird” that is just stunned, not hurt.

The Raptor Center sees a lot of young birds, nestlings and fledglings, and “has developed a specialty in this,” said Ross. In a typical year, anywhere from 150 to 200 raptors will be brought to the Center for care. Ross, who is not a veterinarian, works with an avian vet who volunteers his services, Mike Brown of Centerville, to provide treatment.

The work of rehabilitation is physically demanding and emotionally intense, said former assistant Molly Finch, who worked alongside Ross in various capacities for three years. “Working with Bet is a life-changing experience,” she said. Only Ross and her assistant, drawn from the intern ranks, handle the birds that come in for rehabilitation, “to minimize the trauma to the birds,” said Ross.

“Bet is astoundingly capable and strong and amazing,” said Finch. One time when Finch was away from the Center (“I only left twice the whole year,” she said), a bald eagle was brought in. Ross was alone and had to handle the bird herself. “It would be hard for a burly dude to do that!” laughed Finch. “Bet did it.”

About half of the birds that come to the Center recover and are released. “We do this work so the birds will leave,” said Ross. The periodic releases are public events; Ross recites a poem as she and staff send the rehabilitated birds to take their chances in the wild. Other birds die from their injuries, and still others, despite receiving treatment, fail to heal.

“When a bird is really suffering, when we’ve given it lots of chances and it’s just not getting better over time, we have to consider euthanasia,” said Ross. “It’s hard. I’ve shed many a tear.”

Though Ross is leaving full-time duties at the Raptor Center, she plans to stay in Yellow Springs. “I’ve lived here longer than I have anywhere else,” she said. For most of her time as director, she’s made her home in a little cabin in the Glen, near Grinnell Mill. “I moved there temporarily in 1988,” she said. She’ll be vacating those rustic quarters for a more domesticated space in the village — coming in from the wild, as it were.

For many years, she’s also had a house in Cape May, N.J., where she goes twice a year, in fall and spring, to watch the bird migrations. But her heart, and perhaps the living presence of the thousands of birds she’s actually touched, lies here.

“Not many people could do what Bet does,” said Finch, her former intern. “The weight of all those lives — that’s a big deal.”