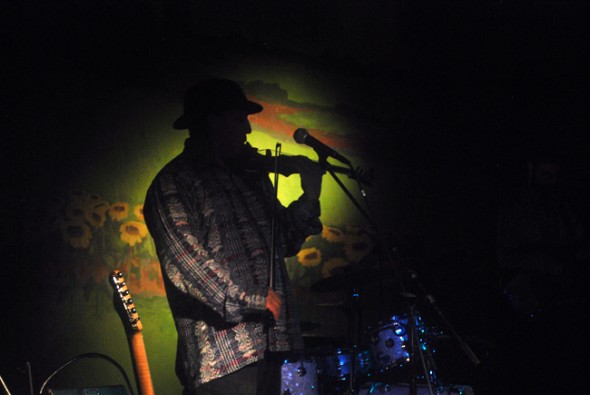 Lionel Young plays at The Yellow Springs Amphitheater. (All photos by Aaron Zaremsky)

The crowd began to thin and the rain drove more away, but still the Blues Fest pressed onward with heart and vigor. The groups that were able to perform gave their all, and fans that stuck it out to the end were treated to terrific music and great food, courtesy of the AACW.

AACW, or, The African American Cross-Cultural Works, is an organization that honors and celebrates cultural diversity and heritage in the village of Yellow Springs. In addition to the annual Blues Fest, the organization also hosts an annual Kwanzaa celebration. This year, the AACW organized the annual Blues Fest event, which involved a number of events around town and at the Antioch Amphitheater.

AACW is headed by longtime resident Faith Patterson, and her family is a big influence on the festival, with her son and grandson usually procuring a slot in the musical lineup. This year, unfortunately, due to a sudden rainy spell and a dwindling crowd, The Nerak Roth Patterson Band made the decision not to perform.

Residents and out of town fans were treated to some special events and workshops before the main festival Saturday night. The Northern Kentucky Brotherhood Singers sang Gospel at the First Presbyterian Church and there was a screening of the Nigerian film “Amazing Grace” at the Antioch Amphitheater with the director, Jeta Amata. The day of, on Saturday, numerous blues “workshops” scattered around town gave fans a “teaser trailer” of what was to come that night.

At the time of the festival’s main event, an ominous sky and sparse crowd seemed to seal the event’s fate from the beginning. The Northern Kentucky Brotherhood did their set, and suddenly the sky opened up and everything began to get very very wet. Nerak Roth Patterson decided his group could not perform and they packed up. An uncertain hour passed, and decisions about what to do floated around. Finally, a clear break in the weather gave the Lionel Young Band the opportunity to close the event. The end result was a somewhat scattered and shrunken, but still functional Blues Fest, with the quality of music not diminished by the few setbacks.

The AACW Blues Fest has always been a staple of Yellow Spring’s cultural palette. The event has drawn some huge names in the past such as Erykah Badu, and local legend Dave Chappelle decided to flex his celebrity muscles and MCed in 2006. This year seemed to be a lull in the usual enthusiastic and healthy turnout the event gets each year. Hopefully it will not be a permanent cessation of the festival.

The Blues runs deep in the blood of America. Anyone with the most rudimentary knowledge of music history can trace the influences of almost any major rock star to a handful of poor, day-laboring African-American blues musicians from the deep south. These men had nothing, yet their musical legacy has carried on and left a definite mark in the musical culture of today. It is for this reason that the AACW Blues Fest is important and should continue its legacy in the village of Yellow Springs.