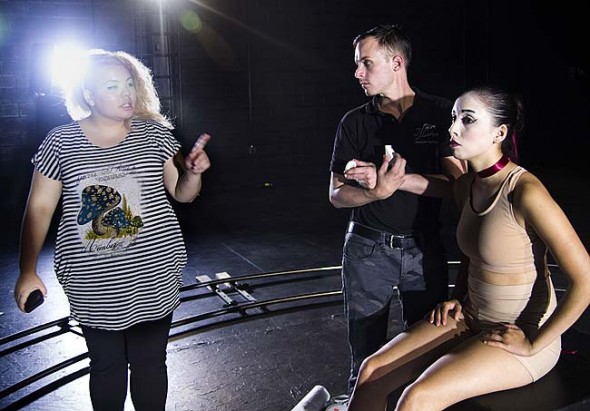 The experimental dance film “Anesthesiaphobia” by Liz Yong Lowe was filmed almost entirely inside the Antioch Foundry Theater in the summer of 2014. The film is part of the biggest Big Lens Film Festival Wright State University film students have held in several years. Most of the films, created in Yellow Springs or by local residents, will screen at a gala Friday, Oct. 16, at the Dayton Art Institute. (Submitted Photo)

Big Lens zooms in on village

Like its sibling arts of theater and literature, film counts setting — a sense of place —- as a significant building block.

This makes the fact that among the 12 films featured at this year’s Big Lens Festival of Wright State University student-made films, eight have connections to the place of Yellow Springs. Seven of them were filmed, at least in part, in the village, while one features a young actress who is growing up here. (The films will be screened Friday, Oct. 16, in a gala setting at the Dayton Art Institute.)

Another local connection to the festival is the event’s faculty advisor, local resident Steven Bognar. The Academy Award-nominated filmmaker said that this year’s showcase is the “biggest we’ve tried to do” since the first festival screening in 1989.

One example of local support, noted Bognar, came in the form of homeowners “giving over their homes for four to five days” to the cast and crew of the short narrative film “Oasis.” The work tells the story of “Olena and the elderly man for whom she is a caretaker.” According to the film’s synopsis, “As his health declines, Olena must come to terms with a commitment she made this man some time ago.”

For another short narrative, titled “Lemonade,” village personnel helped with arrangements and police blocked off traffic at the corner of Stafford and Elm streets in the summer of 2014 for an all-night shoot there. Described as “a portrait of youth and loneliness, freedom and heartbreak,” the film uses the specificity of a Yellow Springs neighborhood as the setting to explore universal emotions and experiences.

Two of the works to be featured in the festival were filmed entirely in and around town. “Anesthesiophobia” is an experimental dance film shot primarily at the Foundry Theater, with some external shots made in a field at John Bryan State Park; while “We’re Still Here,” by Yellow Springs native Joe Lurie, is a documentary about the closing and reopening of Antioch College.

Bognar and “Anesthesiaphobia” writer and director Liz Yong Lowe both expressed their appreciation for Antioch College’s “generosity” in opening the Foundry Theater for a weekend of filming last year.

Yong Lowe, a native of Medina, Ohio, said the space contributed to the experimental nature of her piece, which melds film, dance and music, “reflecting who we are as human beings.” The theater offered “a relaxing and supportive atmosphere” in which to create a piece that explores the struggle of an artist to be true to her individuality despite intense pressures to conform.

Lurie’s “We’re Still Here” was seven years in the making. “Joe struggled mightily to see it through,” Bognar said.

“I didn’t really anticipate that it would take seven years,” Lurie said. “The story just continued unfolding, and I felt I had a responsibility as a story-teller and a filmmaker to follow it through.”

Lurie began the project by following a first-year Antioch student in 2008, after Antioch University first announced its expectation to close the college. He ended up with over 100 hours of film — some taken by Antioch students and faculty throughout the school’s struggle to survive — which had to be edited down to about 20 minutes.

While the film focuses on Antioch College, the village takes a role as well. “Antioch College is really a lifeline for Yellow Springs,” Lurie said. “It really helps shape the town and the people who come here and live here. [The college’s closing] was bigger than just the college.”

Despite the challenges in completing this film, Lurie said he “absolutely” wants to continue on the documentary path. “I love making documentary films. It’s the work I find the most interesting and challenging — in a good way. I really believe in the impact they can have to make positive changes.”

“We’re Still Here” will get its first public showing at the Big Lens Festival. Other films to be screened that were made partly in town are “Oak,” “To the Rescue” and “Trip.” In addition, the narrative “Wren” features a starring performance by Sumayah Chappelle, given when the Yellow Springs native was in middle school. According to Bognar, Friday’s event at the Dayton Art Institute may already be sold out, but the community will likely be seeing the work of these young filmmakers in the future as they pursue promising careers.