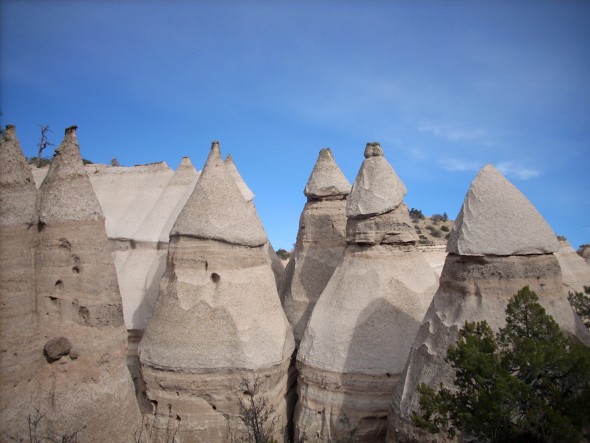 “Get ready quick,” my husband said. “We need to be out there.”

His urgency was understandable, at least to me. There’s a point of inflection every autumn, where the lazy drifting of leaves gets serious. This morning, it got serious. Certainly the walnut in our yard did. Like bubbles over the lip of a glass, a furious golden foam frothed down. And not just down. The wind was a postmodernist choreographer, intent on mapping chaos, on deconstructing every impulse toward form.

All we were intent on was getting outside. The day was another blue gift, a riff on the day before. Such is October in Ohio, I’m learning. When we lived in New Mexico, October also was the fairest of them all. We did a lot of driving during our first fall there, getting acquainted with just a small portion of a vast state. On one trip, we visited Tent Rocks, a field of formations so fantastical only a volcano could have choreographed their birth — which is exactly what happened. Between six and seven million years ago, volcanic eruptions at the site left thick deposits of pumice, ash and tuff; eruptions nearby added rock fragments and blasts of hot gas to the mix. Eventually, everyone cooled off and agreed to try to make it work. Tent Rocks is the monument to their effort, an unearthly landscape of whitish-grey peaks resembling temples — or, in another phase of heart, upward-pointing missiles. Peace is always equivocal, I guess.

But there’s nothing ambiguous about a blue sky, there or here, and the peace that it presupposes is absolute. I don’t know if you’ve ever been heartbroken under a blue sky. I have, and the sky in its radiant perfection can seem cruelly unconcerned. Until you realize that it offers just the thing you lack, and it’s like a temple whose door opens to a flower-scented stillness — which turns out to reside inside you.

In the silence at the top of Tent Rocks, we heard the very point of contact between the wind and a raven’s wings. A faint oceanic hiss as wind laced its fingers with the raven’s feathers, and a shush as the feathers turned to hands and dug into the wind’s sand. Flying is a dance between two bodies, one of whom has no body. Witnessing it was mystical, monumental, and at the same time really nothing at all.

“It’s leaf-fall morning!” my husband said the moment we stepped outside. It was. The weekend’s cold snap whispered “Shed, shed, shed” in the gingkos’ willing ears, and so they did — never mind that the leaves they dropped were still bright green. I was mad that the cold weather had foreclosed the gingkos’ turn to incandescent yellow, mad like a kid denied a present after months of waiting. I wanted to look one more time in the back of the hall closet, or maybe under my parents’ bed — surely the thing I’d longed for was there? Last year, the gingkos flamed yellow, then shed all their gilding overnight. Every tree had a perfect nimbus at its ankles — or were these saints merely painted upside down?

The world is always on the verge of being something else. Call it the temple/missile effect. I think the world’s drawn double, like an optical illusion. Look at it one way, and you see the young woman. Look at it another, and the old woman emerges. In middle age, I often feel like this. A few degrees, and the ground is deep with leaves; a few more, and the north wind rattles the bones of the trees. (Is there a lonelier sound?) But then it warms up, as it did this afternoon, and winter seems a long way off — a castle that autumn is patiently building, even as it tears summer’s castle down to the studs.