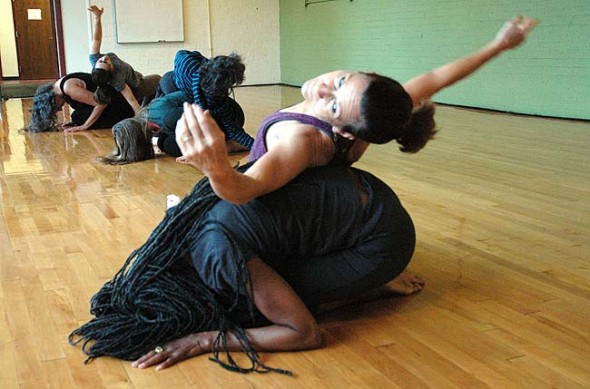 Dimi Reber, professor emerita in dance at Antioch College, has choreographed a new a piece entitled “Finding Myself in this Earth.” The work will be performed as part of a concert of original works by local performers and choreographers on Friday and Saturday, Oct. 16 and 17, at 8 p.m., in the Foundry Theater. (photo by Lauren Heaton)

In the Worman dance rehearsal space at Antioch College, bodies rock, run, collide, stop and are stopped. Repetitively, endlessly, they roll, dive and search with an urgency that speaks to what long-time dance teacher Dimi Reber sees as the big issue of our time: caring for the natural environment. Her most recent work, “Finding Myself in this Earth,” represents the oneness she feels with the land and the elements.

The dance animates concepts similar to what environmental scientist David Suzuki describes in his books and talks on the human interconnection with nature.

“There is no environment out there, and we are here, and we somehow have to watch the way we interact with it. We are the environment,” he says in his 2011 film, “Force of Nature.”

Reber has long felt a deep resonance with the environment and believes in the universal interdependence Suzuki talks about.

“I’m co-substantial with the earth, air and water. That notion was always touching and moving to me,” she said in an interview last week.

Reber will share what that notion means to her in a dance concert titled after her piece, “Finding Myself in this Earth,” to be performed Friday and Saturday, Oct. 16 and 17, at 8 p.m., in the Antioch College Foundry Theater. The concert will also feature new works by Jill Becker, Valerie Blackwell-Truitt, Tricia Gelmini, Judith Mikita and Louise Smith. General admission is $12, senior and student tickets are $8 and children’s tickets are $5.

Though she spent her life as a dancer and choreographer, until recently Reber hadn’t choreographed in nearly a decade. After retiring from the Antioch College dance department in 2001, she maintained her own movement routine and collaborated for fun with friends. But as an artist who relied on her body to give shape to her work, her own aging steered her away from creating.

“I processed through my body — it was my touchstone for gauging whether this was right or not right — I sourced from my own body,” she said. “But when my own body became an aging body, it wasn’t there to be that anymore.”

Then two years ago, local dancer Tricia Gelmini asked Reber to perform an improvisational piece with her at the Contemporary Dance Theater in Cincinnati. At 73, Reber stepped back into her creative mode and found it surprisingly “freeing, exhilarating!” she said. Though the work wasn’t perfect, Reber said, she liked a lot of what she saw and realized she could compose in a less critical manner than she had in the past.

“With a less critical eye on my stuff, I could see the flaws, but I could also say, ‘I like this work!’” she said.

Around the same time, Reber had also been drawn to the lyrical writings of environmentalists such as Suzuki, Wendell Berry and even the phenomenological musings of Neil Evernden’s “The Natural Alien.” Believing the environment needed her attention, she joined local climate change groups whose awareness raising efforts focused on group readings, local data gathering and political action campaigns. Though Reber believes that counting carbon is important, what she wanted to share most was her excitement about the tangible connection between humans and the earth. She kept coming back to Suzuki’s statement, “We are air.”

Over six months Reber choreographed in collaboration with seven dancers, Gelmini, Becker, Blackwell-Truitt, Judith Mikita, Marybeth Wolf, Becca Fitch and Katie Gaines, as well as theater director Louise Smith. Combining her own spoken word with texts from Suzuki’s “The Sacred Balance” and Berry’s “The Art of the Commonplace,” Reber set the movement to excerpts from J.S. Bach’s “Magnificat” and Henry Purcell’s opera “Dido and Aeneas” — Baroque music whose clean and repetitive patterns spoke to her of eternity and profound hope.

The dance evokes a quiet steadiness, with elements of drama like that of birth and the struggles of life. And as Dido sings in her aria, “When I am laid in earth, remember me,” the work also conveys a sense of remorse that Reber likened to her lateness in life.

“It carries the sadness of aging and my own death — it’s in there,” said Reber, who also dances in her piece.

But she wants to convey, as Suzuki does in his book, which touches on his aging as well, that death is essential to life.

“Earth is made by this accumulation of life and death — the cycle of death makes the circumstances for life to exist — it’s the dying of plants that makes topsoil that enables new plants to grow,” she said.

The concert will also feature solos and duets, including a piece about memory called “This Is Our Place” by Gelmini; vignettes called “Stories from a Dead Woman’s Kitchen,” by Mikita; “Expectations” by Blackwell-Truitt; an improvisational piece with Becker and Gaines; and a piece about memory with movement and voice by Smith. The program will also be performed at the Contemporary Dance Theater in Cincinnati on Oct. 24.